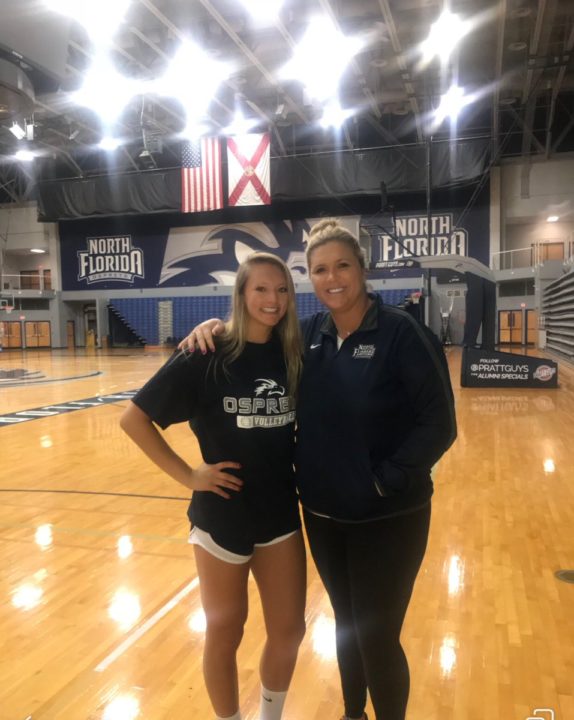 Class of 2019 recruit Maddie Norris has committed to North Florida for both indoor and beach volleyball. Archive Photo via Maddie Norris (@MaddieNorris2)

Class of 2019 recruit and New Hampshire Gatorade Player of the Year Maddie Norris has verbally committed to North Florida to play both indoor and beach volleyball. Norris will be a freshman indoors in 2019 with her first season in the sand coming in the spring of 2020.

Norris will be a senior in 2018-2019 with Hollis-Brookline High School in Hollis, New Hampshire. In her most recent season though as a junior, she helped the team to a 25-1 record and a third straight state championship. Individually, according to her MaxPreps profile, she logged 241 kills on high efficiency, 168 digs, 68 aces and five blocks.

Standing at 5’11”, Norris can play either pin and is mainly an outside hitter. She owns a 7’7″ standing reach, a 9’4.3″ block jump and a 9’10” approach touch. Beyond winning the state’s Gatorade Player of the Year award, she has also racked up first-team all-state honors.

On the club side, Norris plays with Smash 18 Attack. Video of some of her play with her high school though can be seen below via her YouTube channel:

Indoors, North Florida is coming off of a 13-19 season and a 5-9 mark as a member of the Atlantic Sun Conference. In the sand, that record was almost flipped as they went 19-12 and fell just short of a conference championship.

Happy to announce my verbal commitment to play indoor & beach volleyball at the University of North Florida! Thank you to my coaches, teammates, friends & family for supporting me through this journey. I can’t wait to further my academic and volleyball career! #ospreynation #D1 pic.twitter.com/tET01ZwdHk