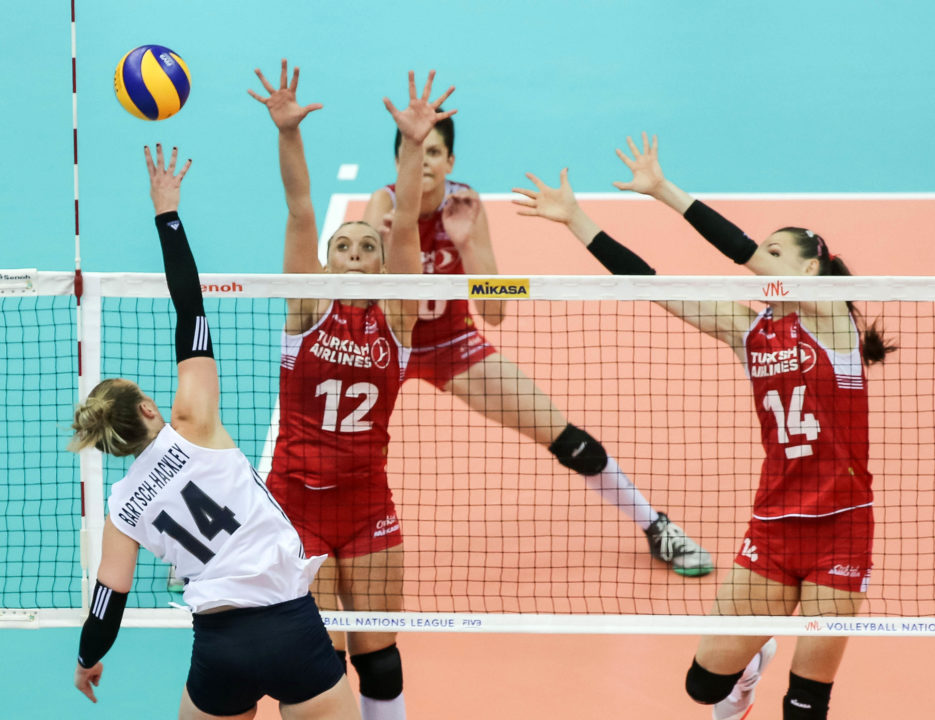 Michelle Bartsch-Hackley scored 21 points after not starting until set three when Team USA came back from an 0-2 hole on Turkey. Archive Photo via FIVB

The United States Women’s Junior National Team posted just two losses in 15 pool play matches, but what made their Final Six group even more interesting was that the two nations to give them those losses are here. It didn’t look good early for the Americans as Turkey almost downed them once again, but the U.S. pulled off the reverse sweep to overcome the 0-2 hole.

The savior in the effort was Michelle Bartsch-Hackley, who went on to score a match-high 21 points. However, she did not appear in the opening set and only rotated on in the second. After trailing to the 0-2 hole, the lineup was shifted with her, Tetori Dixon (12 points) – who didn’t appear in the first two games – and setter Micha Hancock replacing Kimberly Hill (6 points), Lauren Gibbemeyer (5 points) and Carli Lloyd.

It was really a showing of the depth and different options for the United States, which can help them mix and match lineups with the hot hand and to work around some individual struggles. Fortunately for them they found the right mix just in time after Turkey’s Meliha Ismailoglu (18 points), Eda Erdem Dundar (14 points) and Meryem Boz (13 points) helped build up a 2-0 lead.

That’s when those lineup alterations took place, and the insertion of Bartsch-Hackley immediately made the offense more difficult to pair with Kelly Murphy (17 points) and Jordan Larson (14 points), who were constants throughout. They would keep their composure and find their way out on top in the fifth.

It’s a huge victory in the sense that with just two matches to advance to the semifinals, getting that first win out of the way can be a huge weight lifted off your shoulders. Now the United States are in a spot where if Turkey loses again to Serbia they clinch a spot in the semifinals. However, if Turkey responds tomorrow and downs the Serbians then USA will either have to eliminate Serbia or could be hurt by only getting two points in this one in case of a three-team 1-1 tie.

Team USA head coach Karch Kiraly: “Congratulations to Turkey, they have a great coach, with a really strong 2018 season. They came out fighting at a very high level and we really had difficulty finding answers or solutions to some of the problems they were creating for us. I am proud of our team’s response. It was never easy but sometimes, things are very difficult for the whole match. We kept fighting for every single point. That is one thing we can take away from this match.”

Turkey head coach Giovanni Guidetti: “USA showed a great level of play in the fourth and fifth sets. I am very happy with the way we played for the first two sets. I think these are probably the best two sets of our play here in VNL, with very few mistakes and great performance in every aspect of the game. With the first set, I think the United States were not playing as amazing and we gave them nine unforced errors, which are just too much for a team like them. When they came back in the match, they showed their great volleyball, which for us, basically, gave no chance after. But I think these two sets prove our good level of play and we are looking forward to the match tomorrow, where a victory can help us qualify.”

It wasn’t quite as dramatic of a comeback for the Chinese side against the Dutch, but they did have to overcome a set deficit after Netherlands took the first on the road. From there, China would go on to win the final three games in the four-set triumph.

While the theme of the comeback stood strong in this one as well, the approach was very different. Without as much depth and a trusted lineup as the top-ranked team in the world, China stood its course with its same starting lineup even after going down 0-1. Zhu Ting was phenomenal throughout and looks ready to explode once again in the Final Six after she pleased the home contingent to 36 points on 29 kills (64 attempts) and five blocks.

China found some balance too, as their next four highest scorers all had between eight and 11 points, led by Xinyue Yuan (11 points) and Xiangyu Gong (10 points).

For Netherlands, Lonneke Sloetjes (22 points) and Anne Buijs (20 points) were a strong duo that led to the set lead and their competitive play in the following games. Yvon Belien (12 points) tacked on strong contributions as well, but the Dutch couldn’t find a fourth option to counter Zhu and her counterparts as Maret Balkenstein-Grothues struggled with just three kills on 20 attempts.

The biggest advantage for the Chinese side was their block, which led to a 12-6 edge. They also had three more spikes (60-57) while the Dutch had more aces (7-4). China was the more mistake-free team too after they had three less team errors.

After stumbling to a 7-8 mark in pool play where they knew they didn’t have much to play for as Final 6 hosts, China turned on their ‘A’ game in this one. It didn’t hurt that the home crowd helped pushed them over the edge and kept their confidence going even down 0-1. For Netherlands, they now face a must-win match tomorrow against Brazil, whereas if the South Americans win then China will clinch a spot in the semifinal round.

Turkey still looks wonderful~!!!!! Such a wonderful group of women.