No. 11 Florida State Rolls Past Notre Dame In Three 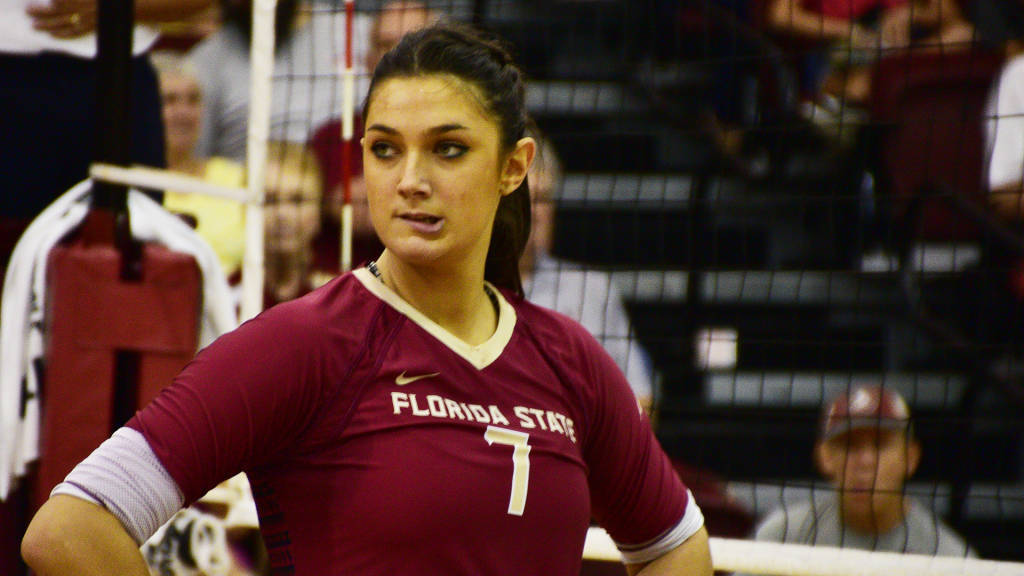 The Seminoles had four players who posted career-bests, with Milica Kubura putting down 19 kills on a .361 hitting percentage, marking the 12th time this season she has hit double-digit kills. Christina Ambrose significantly bested her precious career-best 13 kills, by posting 18 in the win.

Notre Dame handed out seven aces in the match, not having recorded five or more aces in 21-of-24 matches this season. Jemma Yeadon put down 12 kills, the 13th time the freshman has had 10 or more kills this season. Freshman Hanna Klein recorded a career-best 25 assists.

SOUTH BEND, IN. – Florida State’s Milica Kubura (19 kills), Christina Ambrose (18 kills), Cecilie Woie (29 digs) and Katie Horton (23 digs) enjoyed career-best outings as the 11th-ranked Seminoles extended their winning streak to seven matches with a 17-25, 26-24, 25-14, 25-20 victory at Notre Dame in ACC volleyball action on Sunday afternoon. The victory improves the Seminoles to 18-3 overall and 11-1 in league action as they wrap up the weekend tied with North Carolina, who they clash with in one week on Sunday, Nov. 6.
Woie, who turned in her second 20-dig outing of the season, eclipsed her previous career-high (28) which came earlier this month against NC State. Horton also established a new career-high on the back row as she topped a 20-dig performance which also came against the Wolfpack (Oct. 9). Hailey Luke came through with her third double-double of the season (22 assists, 10 digs) as the backrow trio provided the Seminoles with a 91-70 advantage in digs.
Kubura, who tied her career-high in kills, topped the double-digit kill mark for the 12th time this season, posting a .361 hitting percentage on 36 swings. Ambrose shattered her previous career-high mark in kills (13), finishing with a .325 hitting percentage in 40 attacks. Senior Mara Green, who had a .600 hitting percentage, narrowly missed double figure strikes (nine) for a Seminole unit that recorded 64 team kills.
Melanie Keil, who emerged with five total blocks (two solo), was one of four Seminoles with at least three blocks along with Green (five), Kubura (three) and Stasa Miljevic (three). Florida State’s 18-14 advantage in total blocks helped limit the Irish (18-6, 9-3 ACC) to a .175 attack percentage and 50 kills.
A solid offensive performance in the third set carried over into the fourth as timely kills from Ambrose, Keil and Horton along with blocks by Green and Miljevic allowed the Noles to establish a 9-5 lead. The Seminoles maintained their lead, despite two kills each from Meg Morningstar and Rebecca Nunge, behind two strikes each by Kubura and Ambrose.
Leading 15-13 at the midway point of the match, Kubura emerged with three of the next five Seminole points as Notre Dame called its second timeout trailing 20-16. Two kills from Ambrose and one from Luke helped Florida State earn its seventh consecutive win over the Fighting Irish in the series.
“It was a tough match today,” said head coach Chris Poole. “Notre Dame came out very determined and did a good job of keeping us out of sync. We definitely improved as the match progressed and realize that we need to do a better job of coming out stronger in the first set. However, I am pleased with how we hold our composure under adversity and keep fighting.”
A focused Seminole squad emerged from the break and behind two kills each from Miljevic and Kubura grabbed a 10-4 lead. After a pair of strikes from the combination of Green and Kubura stretched the Florida State advantage to 13-5, Notre Dame burned its second timeout.
The Seminoles used that timeout, along with two kills by Green and a strong service game by Horton, to score seven of the next 13 points as they moved in front 20-9. Notre Dame eventually cracked double figures, but kills down the stretch from Miljevic, Keil, Ambrose and Horton was too much for the Irish to overcome as Florida State prevailed by 11.
The two teams traded the first 14 points of the second set as they reached a seven-all deadlock on a kill by Horton. The Fighting Irish capitalized on a Sam Fry service ace and a Jemma Yeadon kill to forge in front 12-9, but Florida State remained close with kills from Kubura and Keil and a service ace by Luke.
Strikes by Kubura and Ambrose pulled the Seminoles even at 17 as a back-and-forth battle for the lead ensued. Seven ties over the next 14 points, with neither team unable to lead by more than one point, resulted in a 24-all deadlock before kills from Horton and Green provided FSU with a two-point win heading into the intermission.
Florida State opened the match by grabbing a 6-3 lead behind three kills from Ambrose before a quick Fighting Irish rally knotted the frame at seven-all. Notre Dame eventually grabbed an 11-8 advantage, with back-to-back service aces from Fry, forcing a Seminole timeout to regroup.
Notre Dame managed to build on its three-point edge by scoring 10 of the next 18 points, highlighted by two kills from Fry and Yeadon as it moved in front 21-16. The Fighting Irish surrendered just one point down the stretch to complete the eight-point win.
“With North Carolina losing this weekend to Pittsburgh we are now tied for first place and will be playing for a chance to take a lead in the conference,” added Poole. “We need a big crowd this weekend to help us energize Tully Gym for the match with the Tar Heels.”
After playing their last four matches on the road the Seminoles return home next weekend to host NC State (Nov. 4) and North Carolina (Nov. 6). Florida State opens the weekend with a match against the Wolfpack on Friday evening at 7 before clashing with the Tar Heels two days later at 1 p.m.

NOTRE DAME, Ind. — Notre Dame (18-6, 9-3 ACC) got off to a great start against No. 11 Florida State (18-3, 11-1 ACC) on Sunday afternoon in Purcell Pavilion, winning the first set in impressive fashion. However, the Seminoles proved worthy of their ranking, winning the next three frames to win by a final of 3-1.

After getting off to an uncharacteristically slow start against Miami on Friday, the Irish came out of the gates firing on Sunday afternoon against the Seminoles. Trailing 6-3 early, Notre Dame went on a 9-2 run to open up a four point advantage at 12-8. The Irish never looked back in the set, as it took the opener 25-17 to take an early 1-0 lead in the match.

The second set was tight throughout. The Irish built a three-point lead at 17-14 but Florida State answered with three points of its own to tie the score at 17-17. With the second stanza knotted up at 24-24, the Seminoles managed to win the final two rallies to narrowly edge the Irish by a score of 26-24 to level the match at 1-1. Florida State continued its strong run of play into the third, as it took control of the set early and won comfortably at 25-14.

The Seminoles led early in the fourth at 10-6 but Notre Dame fought back to cut the deficit to two points at 18-16. However Florida State was too much for the Irish, as it went on to win the set 25-20 to leave with a 3-1 victory.

Natalie Johnson was all over the court in the back row for the Irish against the Seminoles, as the junior matched her career high in digs with 24 to lead the team in the statistical category. The Pasadena, California native has now reached double figures in digs six times this season. Johnson also added an ace and a kill to complete her afternoon.

NOTRE DAME STAT OF THE MATCH

With starting setter Caroline Holt out with an injury, sophomore Rebecca Nunge played multiple roles for Notre Dame. The Newburgh, Indiana product not only fulfilled her role as an outside hitter but also split time as the team’s setter against Florida State. Nunge finished with a double-double, posting 10 kills and a career-high 19 assists. The sophomore also had a personal best two aces and added five digs and two blocks.

Notre Dame is back on the road for two matches next weekend, as the team travels to the state of North Carolina to play at Wake Forest at 6:30 p.m. on Friday, Nov. 4 and then heads to Duke for a match at noon on Sunday, Nov. 6.