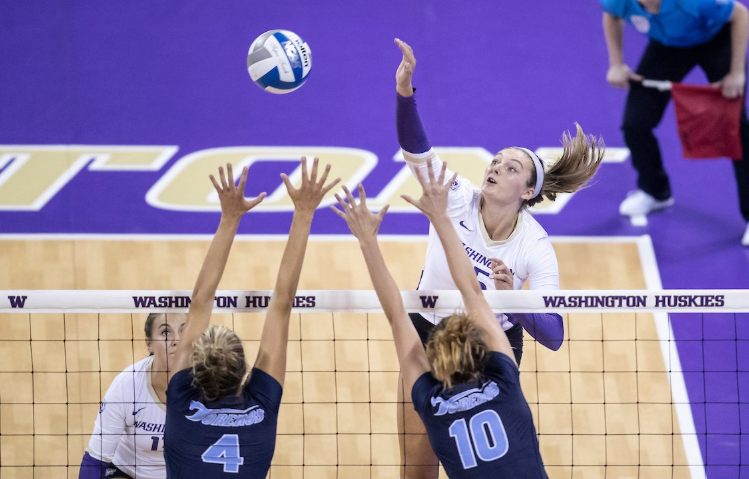 The University of Washington was in familiar territory after getting a seasoning-opening win on Friday night against the University of San Diego. Washington has opened the last 17 seasons in the win column. What made this year special was that it was the first time since 2006 that they played a team ranked in the top 25. While San Diego came out strong and pushed Washington to the limit in the first 2 sets, Washington eventually bounced back to prevail in 4 sets in front of the home crowd of 1,699 fans.

Both teams were working off the rust that comes with playing a top-ranked opponent so early in the season. Washington his .221, while San Diego finished the match with a .218 hitting percentage. Washington started the match hitting .118 and .132 in the first 2 sets respectively before finishing with performances of .391 and .342 in the last 2 sets. San Diego was not able to hit over .294 in any of the sets.

Kara Bahema led the match with 20 kills and 2 solo blocks in her second year as an outside hitter after starting her collegiate career in the middle. Bahema hit an impressive .308 for the match. Lauren Sanders hit /375 on her way to 12 kills in the middle. She also posted 3 blocks assists. Destiny Julye contributed 9 kills, 2 aces, and 7 block assists in the win. Avie Niece had 7 kills on 15 attempts and a .400 hitting percentage. Ella May Powell ran the floor and finished with 46 assists for the Huskies.

San Diego had 3 players produce double-digit kills. Roxie Wilbin and Lauren Fuller both put away 14 kills each. Addie Picha chipped in 10 kills on the night. Wilbin and Laura Madil were the only players from San Diego to score from the service line. Each of them landed an ace a piece. Wilin not only led her team in kills, but she led the match with 16 digs. Cami Kay and Kaity Edwards both finished the match with 8 kills.

Both of these teams will be back in action on Saturday, August 25th as they square off again. Washington will be in the middle of a 4-math home stand that will last until next weekend when they play Iowa and Illinois in the Pac-12/Big Ten Challenge. Those will be their last home matches until they start conference play on September 20th against Washington State. The University of San Diego will leave Seattle and play their net 11 matches at home.