No. 2 Minnesota Rolls Through North Dakota In First Round 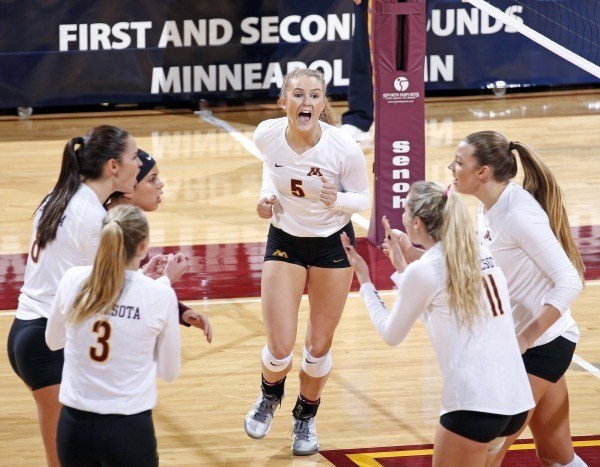 Minnesota advances to the second round of the tournament with the sweep over first time tournament participant North Dakota.

Sarah Wilhite put down a match-best 17 kills and seven digs, while Dalianliz Rosado picked up a match-best 16 digs. Setter Samantha Seliger-Swenson recorded a double-double with 39 assists and 10 digs.

Leading North Dakota’s offense was Chelsea Moser and Faith Dooley, each putting down 11 kills with hitting percentages above .400. Alivia Fraese picked up 14 digs and Tamara Merseli 11.

We've got highlights from last night's sweep for you, #Gophers!

The University of Minnesota volleyball team defeated North Dakota in three sets Friday night, 25-21, 25-12, 25-20, in the first round of the NCAA tournament. Minnesota improves to 26-4 on the season, and remain undefeated at the Sports Pavilion.

“Very happy with the win tonight,” head coach Hugh McCutcheon said. “In particular, I thought it was to our advantage because North Dakota is a good team, they played hard, and served really well. Their middles had a nice night against us and they made us work and believe it or not I really like that. It’s good for us to figure out ways to win. I think it sets up nicely for the battle to come
tomorrow.”

“The Sports Pavilion is amazing and the support from our fans shows that they care a lot about Gopher volleyball and that’s very rewarding,” Wilhite said. “It’s a privilege to play in front of them.”

Minnesota will face No. 12 Hawaii in the second round of the tournament tomorrow night at 6 p.m. at the Sports Pavilion.