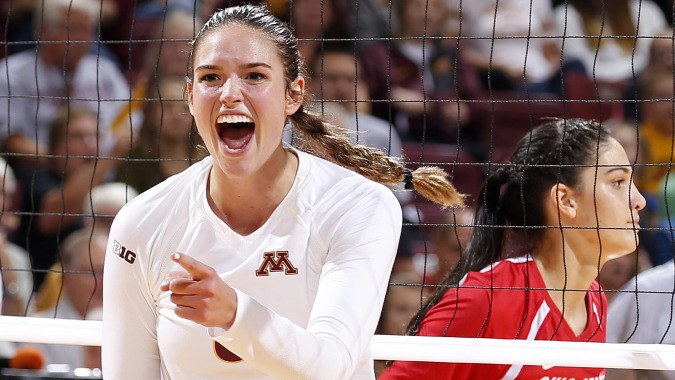 This week, we present our inaugural end-of-season VolleyMob awards, including Third-Team, Second-Team, and First-Team All-America honors. For each level of All-America recognition, we’ve selected six players plus a libero. The week will culminate with us naming our National Freshman and National Player of the Year.

For three seasons, Sarah Wilhite was a sleeper, waiting for a golden opportunity for the Golden Gophers. She hadn’t been named to any all-conference or all-region team, but she consistently delivered where and when she could.

But this season, the beast was fed.

“She’s a very complete player,” coach Hugh McCutcheon told espnW. “Not only can she dig, she can block, she passes, and of course she can hit.”

Wilhite’s career-high 26 kills came against Michigan in November, and she recorded a career-high 25 digs three days later against Nebraska. In her last match, she led the Golden Gophers with 25 kills and added 13 digs.

It was a long road to get there, though.

“My freshman year I was pretty timid,” Wilhite told espnW. “Each year, I’ve grown as a more confident player and had a lot more trust in myself. I believe in myself first and that allows others to believe in me. That was the biggest difference, really.”

Despite her internal apprehension, last season McCutcheon pegged Wilhite as a player to watch.

“It was clear last year that when she was good, we were really good, and when she struggled, we tended to struggle,” he said. “Her ability to influence the match was real then. We talked about, going forward, whether you like it or not, this falls on your shoulders now. She rose to that challenge.”

But at the end of the day, Wilhite credits much of her success to McCutcheon and her teammates.

“The success I have had this season would be nothing without them,” she said. I have embraced my role as a leader and continue to work at being consistent. This year, I have played with a lot more freedom — freedom from pressure and expectations. I have loved every second of being a part of the 2016 team.”