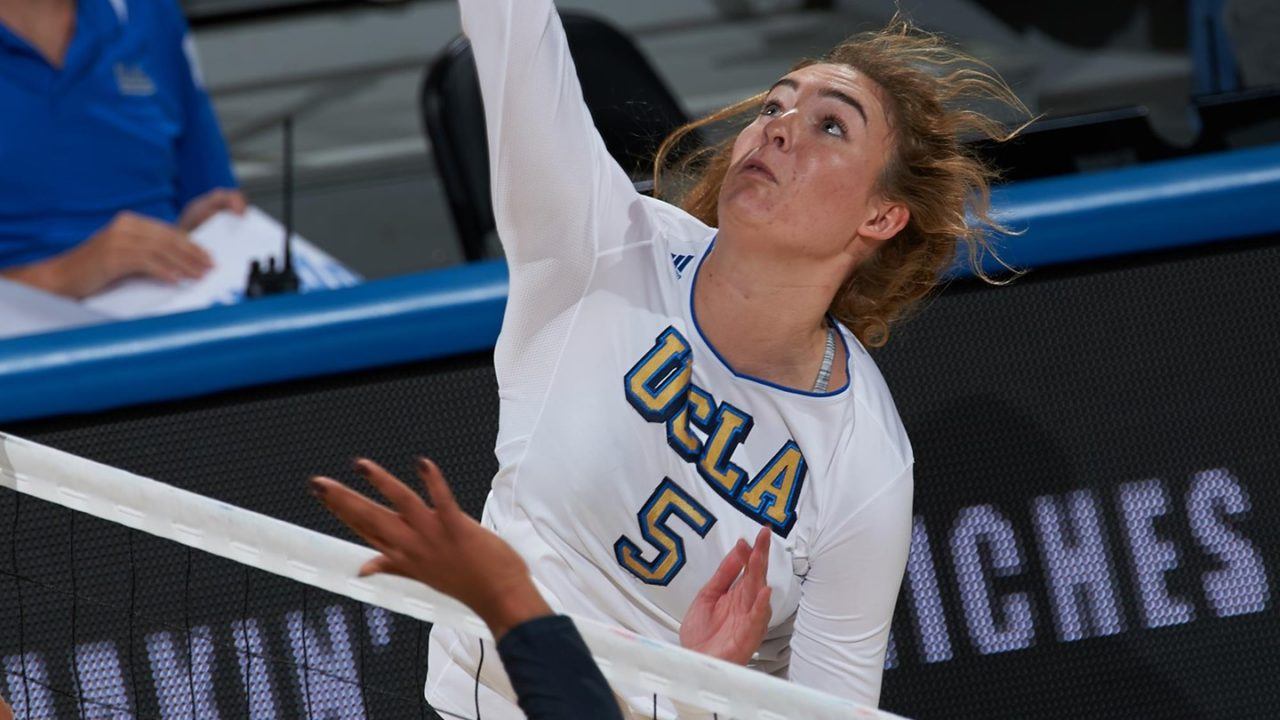 In a thrilling five set match, Torrey Van Winden recorded the best match of her college career with a double-double of 19 kills and 12 digs on a .341 hitting percentage. A big defensive performance put multiple Bruins into double-digit digs, Taylor Formico with 29, Zana Muno with a season-best 23 and Ryann Chandler with a double-double, 13 digs and 30 assists.

Jordan Anderson put down 17 kills and a career-best six blocks for UCLA. Jennie Frager added 12 kills on a .345 hitting percentage and a season-best eight blocks.

Four Bruins (13-4, 4-3 Pac-12) were in double figures in digs, led by senior Taylor Formico‘s 29. Sophomore Zana Muno added a season-best 23, while junior Ryann Chandler also had a double-double with 13 digs and 30 assists. Two others were in double figures in kills, with senior Jordan Anderson notching 17 with a career-best six blocks and senior Jennie Frager adding 12 with a .345 hitting percentage and a season-best eight roofs. Senior Claire Felix posted nine kills and four blocks, junior Reily Buechler had eight kills and five digs, freshman Savvy Simo notched nine digs and freshman Kylie Miller had 27 assists and four digs. The Bruins hit .225 for the match and had 14 blocks.

The opening set featured 13 ties and five lead changes, as the Bruins saved three Oregon (12-4, 5-2 Pac-12) set points before the Ducks took the first on attempt number four. UCLA scored the first five points of the match on kills by Felix and Anderson and then three straight blocks by that same duo. UCLA still led 10-7 before Oregon scored four in a row and seven of nine to take a set-best lead of two at 14-12. The Bruins came back with two Frager kills, one by Van Winden and a UO attack error to go back up 16-14. UCLA led as late as 20-18, but the Ducks scored four of five to go ahead 22-21. Despite five more ties and the three set point saves for the Bruins, Oregon won the first by two. Anderson and Frager each had four kills in the opener, while Formico and Muno both posted five digs. The Bruins were out-hit .227 to .146.

UCLA trailed throughout most of the second set, but an improbable run at the end tied the match heading into intermission. Oregon saw its lead reach as much as six at 20-14 before UCLA scored 11 of the last 14 of the set to win it 25-23. A Van Winden kill and a Duck attack error made it 20-16, and after a sideout, the Bruins scored six straight on a Buechler kill and ace, an Oregon error, two Anderson kills and a block with Frager gave UCLA a 22-21 lead. After another sideout, an Anderson kill and an Oregon attack error gave the Bruins two set points, and on the second attempt, a Felix kill closed out the deuce win. Anderson led the way with five kills, Buechler and Felix both had four and Van Winden notched three kills. Formico added eight digs and Muno posted seven, as the Bruins out-hit the Ducks .260 to .208.

The Bruins’ biggest deficit was only one in the third set. Down 8-7, three in a row on two Van Winden kills and one by Frager put UCLA up for good at 10-8. Even at 13, the Bruins posted a 5-1 run on a Van Winden kill and solo block, kills by Anderson and Buechler and an Oregon attack error. At 21-19, a 4-1 run closed out the set for the Bruins on a kill by Anderson, a Muno/Felix block and two Duck errors to win the third 25-20. Van Winden paced UCLA with six kills, while Anderson and Frager each had four. Formico tallied 10 digs. The Bruins out-hit the Ducks .279 to .151.

UCLA had as much as a five-point lead in the fourth, but Oregon closed late to force a fifth. Even at five, the Bruins scored nine of 13 to go ahead by a set-best five at 14-9. Van Winden had two kills and a block during the run, while Anderson added two kills. The Ducks responded with an 8-2 run to go up 17-16 and would not relinquish their lead for the rest of the set, winning the fourth 25-21. Van Winden had five kills and five digs in the set, while Anderson added three kills, as the Bruins were out-hit .353 to .189.

The Bruins dropped the first two points of set five and trailed 3-1, but then scored four in a row on kills by Frager and Anderson, a Frager/Anderson block and an Oregon attack error. Oregon evened things at six and eight, but were unable to recapture the lead. At 8-all, the Bruins scored seven of the last eight of the match to win the fifth 15-9. A Buechler kill and block with Frager, along with two Duck errors, accounted for the first four Bruin points. After a sideout, kills by Van Winden, Frager and Muno finished up the six-point win. Van Winden had three more kills in the deciding set, while Muno posted six digs, as the Bruins out-hit the Ducks .241 to .000.

The Bruins head up to Corvallis on Friday at 6 p.m. The match will air on Pac-12 Network Los Angeles and Oregon.

EUGENE, Ore. – No. 16 Oregon volleyball lost just its second Pac-12 match of the year on Wednesday, falling to No. 20 UCLA in five dramatic sets, 28-26, 23-25, 20-25, 25-21, 9-15, in front of 1,134 at Matthew Knight Arena.
How It Happened: After outlasting UCLA (13-4, 4-3 Pac-12) in a back-and-forth first set, the Ducks (12-4, 5-2 Pac-12) dropped the next two sets to fall into a 2-1 hole. Oregon rallied to win the fourth set and go to its second five-match set of the year, but a strong finish by the Bruins in the fifth set gave them a 3-2 victory.
Freshman Jolie Rasmussen led the Ducks with 18 kills while leading all players with 60 swings, and Taylor Agost added 16 kills while recording a career-high seven blocks. Lindsey Vander Weide recorded her team-best seventh double-double of the year with 12 kills and 11 digs, while August Raskie (21 assists, 15 digs) and Maggie Scott (28 assists, 11 digs) also finished with double-doubles. Amanda Benson led the Ducks with 24 digs. Sumeet Gill provided a noticable boost of energy off the bench, contributing a season-high six blocks. UCLA out-hit Oregon, .225 to .192, and finished with 99 digs to the Ducks’ 89 behind 29 from Taylor Fornico. Both teams were successful on the block, with the Ducks finishing with 15 and the Bruins earning 14.
Set 1: UCLA jumped out to an early lead in the opening set, scoring five straight points to open the match. The Ducks responded with a 14-7 run to take a two-point lead before the Bruins scored three straight to go up 15-14 at the media timeout. Out of the break the two teams locked into a back-and-forth battle, playing to a 24-24 tie. The Bruins were able to fight off a pair of Oregon set points before a kill by Vander Weide and a block by Page and Vander Weide sealed the opening set win for the Ducks, 28-26. Agost led all players with six kills while hitting. 545, Scott dished out nine assists and Page had three blocks.
Set 2: The second set saw a strong start by Oregon, with the Ducks taking a 6-3 lead to open up the game. The Bruins would get within one at 8-7 before six points in eight rallies gave the Ducks a 15-10 advantage. The Ducks would extend their lead to 20-14, forcing the Bruins to burn the second of their two timeouts. UCLA would score eight of nine points to take a one-point lead, 22-21, prompting Jim Moore to use both of Oregon’s timeouts in the process. After an Oregon point tied the set at 22-22, the Bruins would score three of the next four to win, 25-23, and finish the set on an 11-3 run. Rasmussen was in control of the second set for the Ducks, putting down seven kills to lead all players. Stone had two blocks and Raskie dug six balls.
Set 3: The Ducks and Bruins traded points for the majority of the first half of the third set, playing to a 13-13 tie midway through. A 6-2 Bruin run put them up 19-15 and forced an Oregon timeout. The Ducks would get within two, 19-17, before four points in six rallies for UCLA made the lead 23-19 and caused another Duck timeout. The Bruins would score two of the next three to win the set, 25-20, and take a 2-1 lead in the match. Agost led the Ducks with four kills in the third, while Benson provided consistent defense with nine digs.
Set 4: UCLA was in control early in the fourth set, jumping out to an early 14-9 lead. The Ducks would respond with five unanswered points to tie the game up, 14-14. The two teams would trade points en route to a 19-19 tie before Oregon got in a groove and scored five of the next six to go up 24-20 and force a Bruin timeout. UCLA would get a point out of the break, but Agost finished the set off with a kill to send the match to a fifth set. Rasmussen led the Ducks with four kills, while Vander Weide put down all three of her aces in the fourth set and Agost and Gill each had four blocks.
Set 5: After UCLA took a 5-3 lead to open the set and force an Oregon timeout, the Ducks came back to tie the set, 8-8. The Bruins would find momentum and sustain it, though, finishing on an 7-1 run to win the set, 15-9, and leave Eugene with a 3-2 victory. Agost and Rasmussen each had two kills to lead the Ducks while Benson dug five balls.
Quotes: Head Coach Jim Moore On tonight’s match… “I’m not very happy with the result. You have to win that [second] set. You have to put people away – we’re not responding well to pressure. UCLA did a great job, they came out even in the first set and put a lot of pressure on us.”
On blocks… “They had 14 blocks, and I bet 10 of them were one-on-one. I don’t know how many touches they had, but we didn’t put it on the floor. Again, it’s not attacking, it’s protecting.”
Amanda Benson, Senior On tonight’s loss to UCLA… “It’s a heartbreaker. It really felt like a rollercoaster; we’d be up, then we’d be down, and then we’d be tied and we’d let them slip, then we’d slip. That’s what you get with a young team and you just have to learn how to be mature and grow from that.”
On UCLA’s defense… “You have to learn how to hit against blocks like that. With 6’5″, 6’6″ girls you can’t hit it low because they’re going to block you every single time. We have to be smart with our shots.”
On quick turnaround with matches… “There’s no impact. You get used to it. It’s a grind and you have to learn how to forget about this game and get into practice tomorrow and ask, ‘what did we do wrong?'”

Up Next: The Ducks will stay home for one more match this week, hosting USC on Friday at 8 p.m. at Matthew Knight Arena on Pac-12 Networks.