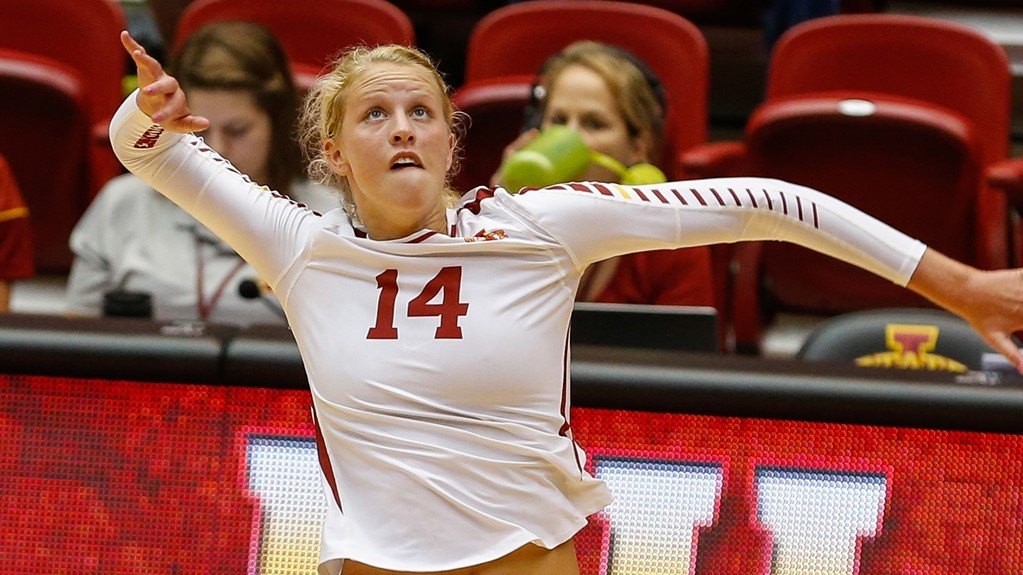 After dropping the first set, K-State fought back to defeat Iowa State easily in their Big 12 opener.

Wildcat Katie Reininger posted a team high 14 kills with an astounding .545 hitting percentage in the conference opener. Close behind was Bryna Vogel with 13 kills hitting for .323 and picking up 15 digs to earn a double-double. Setter Katie Brand picked up a double-double of her own, with 42 assists and 14 digs.

In her libero debut for the Cyclones Ciara Capezio picked up 14 digs. Alexis Conaway and Jess Schaben each contributed 13 kills apiece. Schaben picked up seven of her kills early in the first set.

Reininger, who ended the first set with just one kill on three attempts while committing two errors (-.333), did not commit a single attacking error in the final three sets of the match with 13 kills on 19 total attempts (.684). The redshirt senior led a trio of players in double-figure kills – junior right-side hitter Bryna Vogel (13) and senior outside hitter Brooke Sassin (10) – and has been the Cats’ leader in kills in two of the past four matches.

“We stayed resilient,” head coach Suzie Fritz said after the match. “I thought we got better as we went. It’s something we talk about quite a bit. We talk about staying the course and getting better as we go.”

“We had to stabilize our serve-receive a little bit,” Fritz added. “We were scrambling and having to play out of system too much. Once we got that reeled in a bit, I thought it changed the dynamic of the match.”

The Second and third sets looked remarkably similar, with the Cats winning each 25-17 while holding Iowa State under a .100 attacking percentage and recording four team blocks. Reininger tallied five kills in each set, including five on five swings in the third set for a perfect hitting percentage.

K-State, sparked by an 11-3 run in the heart of the fourth set, opened up an 18-9 lead before finishing the set, and the match, 25-15. The Cats never trailed in the final set and committed only two errors in each of the final two frames.

K-State blocked five Cyclone attacks in the fourth set, a match high, and rejected four in both the second and third sets. The Wildcats finished with 14 team blocks while ISU had just four, two of which came in the opening game.

“Serve and pass was big,” said Fritz. “I thought we minimized our errors in the third and fourth sets better than we did early on. We scrambled well and we played very, very spontaneously. I thought that’s where we were really good. We got our hands on a lot of ball, it wasn’t always pretty but it worked.”

Sassin set a new career high with four service aces in the match, including two in the final set.

Redshirt senior setter Katie Brand and Vogel each recorded double-doubles in the match – Brand with 42 assists and 14 digs while Vogel added a match-high 15 digs to go with her 13 kills. It was Brand’s third straight match with an assist-dig double-double and her team-leading seventh overall. Vogel now has a double-double in two straight matches and five overall this year.

K-State travels to Waco, Texas, to face Baylor (12-4, 0-0) for its first conference road match of the season. First serve is slated for 2 p.m. CT. Fans can watch the match on Fox Sports Southwest Plus or listen on 1350 KMAN.

Alexis Conaway and Jess Schaben led the ISU offense with 13 kills each, Conaway getting her 13 at a .367 hitting percentage. Ciara Capezio

led the back-row with 14 digs, which included her making a debut at libero in the fourth set. The K-State block was strong against ISU, recording 14.0 total blocks while restricting Iowa State to a .134 hitting percentage.

Schaben Leads ISU Back to Take Set One
After K-State racked up five of the first six points, the Cyclones were able to cut the deficit down to one at 5-4, but the momentum did not last long. Three of Kansas State’s first 10 points came via service aces, two from Brooke Sassin, to open up a 10-5 advantage. A strong serving run by Morgan Kuhrt helped bring ISU back into the set at 12-9, and then another strong run from Monique Harris behind the line cut it to one at 16-15. Alexis Conaway tied up proceedings at 18-18 after putting away a K-State overpass. The Cyclones got ahead at 21-20 on Jess Schaben‘s fourth kill of the set, and her fifth and sixth kills brought up set point at 24-21. The Cyclones went to the well on first asking, with Schaben delivering yet again to give ISU the first set 25-21.

Cyclone Offense Struggles as K-State Evens Match
Once again, Iowa State began the set in an early hole as K-State rushed out to an early 8-4 advantage. The Wildcat block stepped up to stifle any potential ISU momentum, as back-to-back-to-back blocks helped the K-State lead move up to 12-6. The Cyclone offense floundered, being limited to a .056 hitting clip for the frame as Kansas State got up by as many as eight points. Iowa State was able to cut the deficit back down to five at 21-16, but the damage was done. K-State got to set point at 24-17, and converted on the first asking when Schaben was denied by Katie Brand and Macy Flowers to make it 25-17 Wildcats.

ISU Can’t Dig Out of Big Hole as K-State Takes Third
An 8-1 Kansas State run gave the Wildcats some early breathing room at 13-6, as once again the Cyclone offense struggled to get around the block. Iowa State struggled to find a formula to get back into the set, as lineup changes across the board were not working with Wildcat lead continuing to balloon up to 18-8. Sami Hillmer came off the bench to provide a spark behind the service line, leading ISU on a 5-0 to cut the KSU lead down to five, but the Wildcats were too far ahead to bring back. K-State got set point at 24-17, which was again converted on the first try as Schaben’s back-row attack was denied by Katie Reininger and Kylee Zumach to make it 25-17 KSU and 2-1 K-State.

being moved into the libero position for the fourth set. The Cyclones were able to hang tough before a 5-0 run powered by a pair of Sassin aces upped the K-State lead to 12-6. The Wildcat offense was on point in the fourth, hitting .351 in the set, while having another strong blocking frame at 5.0 total blocks. Match point arrived at 24-15 on a block, and the match was closed on a block as Grace Lazard

was denied by Zsofia Gyimes and Alyssa Schultejans to make it 25-15 KSU and 3-1 K-State.

Cyclone Notes
*Alexis Conaway had 13 kills, her second match of the season in double figures and 17th of her career.
*Ciara Capezio

contributed 14 digs, her fourth time in 2016 in double figures and 36th of her career.
*Capezio made her debut at libero in the match. She is the third Cyclone to play libero in 2016 (Branen Berta, Abby Phillips).
*Jess Schaben posted 13 kills, her fifth match of the season in double figures and 24th of her career.
*Schaben delivered seven kills in the first set, tying for the most by a Cyclone in a set in 2016. She had done it five previous times, and Alexis Conaway did it once.
*Hali Hillegas

had 10 digs, her second time in 2016 and her career in double figures.

Up Next
Iowa State will have its home Big 12 opener on Sunday against TCU. First serve between the Cyclones and Horned Frogs will be at 4 p.m., with the match being televised on ESPNU.