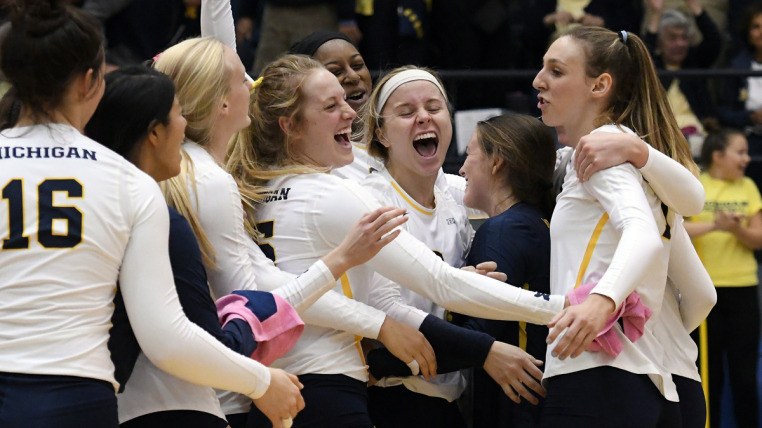 A stellar offensive performance by Michigan led the Wolverines to a four set victory over Ohio State who has dropped their last two matches to Top-25 teams after beating No. 1 ranked Nebraska last week.

Michigan hit for .310 on the night, with Abby Cole leading the way with 16 kills and a .667 hitting percentage. Adeja Lambert contributed 15 kills and Katherine Mahlke posted a season-best 12 kills and a .375 hitting percentage. Setter MacKenzi Welsh earned a double-double with 50 assists and 14 digs. Jenna Lerg picked up 20 digs, the sixth time this season she has dug up more than 20 balls.

For the Buckeyes, two players put down 17 kills, Luisa Schirmer and Taylor Sandbothe, each hitting over .300. Setter Taylor Hughes handed out 45 assists and put down nine kills.

The victory marks the Wolverines’ first win over an AVCA top-25 opponent this season and improves Michigan’s Big Ten Conference record to 4-2 on the year.

Senior Abby Cole led Michigan’s offense, earning 16 kills and committing no errors for a .667 hitting percentage. From the outside, junior Adeja Lambert kept pace with 15 kills, while juniorKatherine Mahlke rallied for a season-high 12 at a .375 clip.

Guiding the offense to a .310 kill percentage was freshman setterMacKenzi Welsh, who totaled 50 assists and 14 digs for her fourth career assist-dig double-double. She added five kills with a .444 attack percentage and one block assist.

Defensively, sophomore libero Jenna Lerg earned her sixth 20-plus dig outing of the season with a team-high 20 digs in the victory. Senior Kelly Murphy and freshman Tiffany Clark added six apiece from the back row.

From the net, seven Michigan players combined for eight team blocks, with junior Claire Kieffer-Wright leading the charge for the ninth time this season with two solo blocks and two block assists.

Michigan came out hot in the first set, picking up three kills and forcing three Buckeye errors to take a 6-0 lead and force an Ohio State timeout. Despite the stoppage in play, the Wolverines surged on thanks to kills from Welsh, Murphy and Kieffer-Wright to take a 12-4 lead and force another OSU timeout. Led by five kills from Lambert, Michigan rallied for 13 kills on a .323 kill percentage and took the set, 25-20.

The Wolverines again came out swinging in the second set, but the Buckeyes soon caught up to tie the set at 5-5. From there, the teams played nearly point for point, tying the set on 13 occasions. Cole and Murphy each had five kills in set two, and while Ohio State finished the game hitting at a .406 clip, Michigan’s .643 attack percentage in the set propelled the Wolverines to a 25-23 set victory and a 2-0 lead going into the break.

Ohio State jumped out to a 5-2 lead in set three before Michigan could rally and tie things up at 7-7. The Buckeyes then rattled off four straight points to force a Michigan timeout, but the lead was set from there. Holding the Wolverines to just a .125 attack percentage, Ohio State took set three by a 25-16 score.

The Wolverines began the fourth set with kills from Cole and Mahlke to take a 3-0 lead and put the momentum in their favor. Despite eight kills from Cole and as much as an eight-point lead in the set, Michigan allowed the Buckeyes to string together a 12-3 run and tie the score at 21-21. From there, the teams battled point-for-point, but an OSU attack error and a kill from Murphy ended the set with Michigan on top, 27-25.

The loss is the Buckeyes’ second straight while also marking Michigan’s second victory in a row.

Michigan will return to action with a trip to Evanston, Illinois, for its first midweek match of the season on Wednesday (Oct. 12). First serve against host Northwestern is slated for 6 p.m. CDT at the Wildcats’ home court inside Welsh-Ryan Arena.

SET 1: Despite a 4-0-5 (.800) attacking stat line from Ashley Wenz in the opening frame, the Buckeyes were unable to fully recover after spotting Michigan a 6-0 lead to start the afternoon. Ohio State shaved off a point from its deficit by set’s end, but still came up short at 25-20.

SET 2: Madison Smeathers mimicked Wentz’ 4-0-5 hitting performance in set number two, flanking Schirmer’s seven kills on 11 attempts to carry an OSU offense attacking .406 as a team. The Wolverine offense got rolling, too, hitting .643 on 19 kills. The offensive fireworks led to 13 tied scores, including a 23-23 standing. A UM kill and Buckeye error came next, securing a 25-23 winner for the home team.

SET 3: Schirmer kept bringing the heat in set number three, putting away five of 12 errorless swings (.417). Everyone chipped in defensively as Ohio State racked up 21 digs and five blocks, limiting the Wolverines to a .125 attack percentage. Seven different Buckeyes dug multiple balls and both Smeathers and Wenz got in on four blocks each, including three rejections together. An 8-3 Buckeye run midway through the period proved to be too much for Michigan, steering Ohio State towards a 25-16 final tally. The OSU spurt converted a slim 7-6 edge into a 15-9 stronghold.

SET 4: Seniors Sandbothe and León sparked a monstrous comeback in the fourth set. The Buckeyes dug themselves out of an 18-10 hole on the back of an 11-3 stretch tying the score at 21-21. Michigan countered by earning the contest’s first match-point opportunity at 24-22. Ohio State deflect both attempts to re-even the ledger, 24-24. The Buckeyes denied a third UM match point two rallies later, pushing the set even further. Michigan finally closed the door, 27-25, on a kill from Kelly Murphy.

The Scarlet & Gray return to St. John Arena for home matches vs. Nebraska and Iowa on Friday (Oct. 14) and Saturday (Oct. 15), respectively. Both Big Ten tilts are slated for 6 p.m. first serves.