No. 3 Minnesota Barely Gets Past Iowa 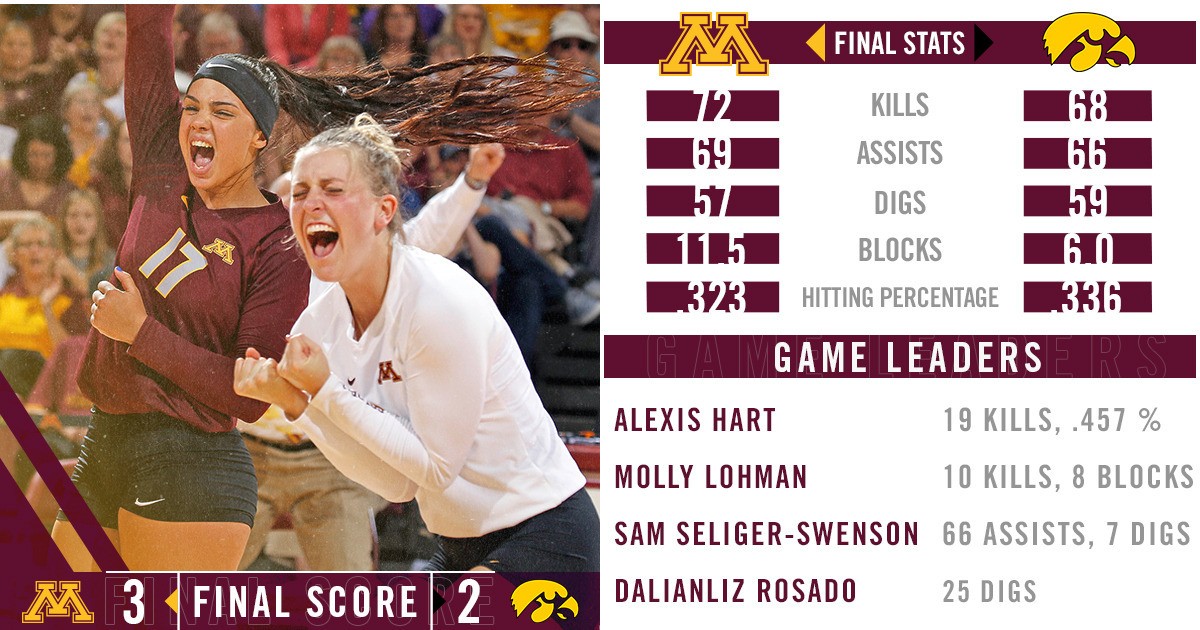 Sarah Wilhite put down 22 kills on a .308 hitting percentage for the Gophers. Alexis Hart added 19 and hit for .457, Hannah Tapp had 14 kills and Molly Lohman contributed 10 kills and eight blocks. Setter Samantha Seliger-Swenson tied her career-high 66 assists, while Dalianliz Rosado picked up 25 digs.

Despite Iowa outhitting Minnesota, .336 to .323, the Gophers had 72 kills to Iowa’s 68. Minnesota also had 11.5 blocks to Iowa’s 6. Minnesota had four individuals with double-digit kills. Sarah Wilhite had 22 kills and a career-high 52 attempts to hit .308. Alexis Hart had 19 kills and hit .457. Hannah Tapp had 14 kills (hit .303), while Molly Lohman added 10 (.381). Samantha Seliger-Swenson tied a career-high 66 assists. Dalianliz Rosado had 25 digs. Lohman also led the Gopher block attack with eight on the night.

The Gophers continue the road trip when they travel to No. 1 Nebraska, Sunday, at 11 p.m. The match is televised live on the Big Ten Network.

Set 3: Iowa hit a stifling .586 in the third set to win, 25-20. Trailing 6-3, Minnesota called its first timeout. The Gophers came out of the break and tied the set at 7-7 before a Hart ace put the Gophers in the lead briefly at 8-7. Iowa, however, went on a run and went up, 12-9. Minnesota called another timeout as the Hawkeyes took a 16-12 lead. Trailing 20-16, Lohman responded with a kill, while she and Hart combined for a block to pull the Gophers within two as Iowa called a timeout. Iowa, however, came out of its timeout and went on a 5-2 run to take a 2-1 lead.

Set 4: Minnesota responded in the fourth to hit .583 in the fourth set and take a 25-13 set win. The Gophers opened the fourth set with an 11-7 lead off a Wilhite kill. Minnesota strung four together for a 15-8 lead. A Hart kill pushed the Gopher lead to 18-10, while she added another kill for a 20-11 lead. Iowa called its first timeout of the set as the Gophers lead, 21-11. Iowa took its second timeout of the set as the Gophers led, 23-12, but Minnesota finished off the set with a Wilhite kill and an Iowa attack error tied the match at 2-2.

Set 5: Iowa took a 6-4 lead and a 7-5 lead and an 8-6 lead before the two teams switched sides. Iowa took a three-point lead off a block at 9-6. Trailing three, H Tapp provided a kill, followed by two from Wilhite to tie the match at 9-9 as Iowa called a timeout. Minnesota earned a block from H Tapp/Lohman as Iowa followed with an attack error for an 11-9 Gopher lead. Iowa called its second timeout of the match. A Wilhite kill put the Gophers up, 12-10. After Iowa responded with a kill, Minnesota finished off the set with three-straight kills for a 15-11 set win and a 3-2 win.

IOWA CITY, Iowa – The University of Iowa volleyball team proved they can go toe-to-toe with the best in the nation as they took two sets from No. 3 Minnesota, but the Hawkeyes ultimately dropped a heartbreaking 3-2 decision to the Golden Gophers on Friday night in Carver-Hawkeye Arena. Iowa is now 15-6 overall and 5-4 in the Big Ten.

“Tonight’s effort says a lot about our team, and that’s what we keep asking for,” said head coach Bond Shymansky. “It’s what we keep demanding. It’s what we keep pushing and working so hard for. I just love the battle and the grit and the fight that our group showed. I definitely like the progress our team is showing.”

Loxley Keala had a career night for the Hawkeyes as she reached 2,000 career assists in the second set. With her career-tying 64 assists on the night, the senior now has 2,035 assists overall. She is one of just eight in program history to reach the 2,000 career assist mark. Keala also racked up 10 digs for her third consecutive double-double and her fourth double-double of the season.

Jess Janota paced Iowa with 18 kills, while Ashley Mariani collected a personal-best 15 kills with just one error for a career-high .636 attack percentage.

Overall, five Hawkeyes reached double-digit kills for the second time this season. In addition to Mariani and Janota, Lauren Brobst amassed 12 kills, while Meghan Buzzerio and Reghan Coyle each chipped in 11. As a team, Iowa racked up a .336 attacking percentage against Minnesota (15-3, 7-2 Big Ten), who has held opponents to an average .178 hitting percentage so far this season.

“The offensive firepower that we have going right now is really strong and very effective,” said Shymansky. “We are getting so much balance out of our group. Everything is coming together and clicking as a team, so there’s a lot of hope for tomorrow. Tomorrow is another great opportunity for us to compete for a W in Carver.”

The Hawkeyes came out swinging in set one to win their first set against Minnesota since the 2013 season. Iowa used a 6-3 run to take a 9-7 lead over the Golden Gophers, but the visiting team responded and drew the set even at 10-10.

The two teams went back-and-forth, but kills from Janota (2), Brobst (1) and Coyle (1), as well as two Minnesota errors, gave the Hawkeyes a 21-14 lead that they would not relinquish. The visiting team attempted a comeback with a 6-2 run, but Buzzerio’s kill stopped the Golden Gophers in their tracks and gave the Hawkeyes a set-point situation before they captured the 25-21 set victory.

After jumping out to a 5-3 lead in set two, the Golden Gophers used a 7-2 run to take a 9-8 lead. Following a kill by Janota, Minnesota used another 4-0 run to extend their advantage. With the visiting team leading 24-19, Keala assisted Buzzerio’s kill to reach 2,000 career assists.

Despite dropping set two (25-20), the Hawkeyes came storming back in set three to take a 2-1 lead. Iowa used a 4-1 run to take an early advantage, but the visiting team responded with a 5-1 rally of their own to knot the game. Iowa held a 10-9 lead when Coyle stepped up and garnered the next five kills for the home team to give them a 15-12 advantage.

The Golden Gophers cut into Iowa’s lead before a kill by Buzzerio, an ace by Janota and two errors by the visiting team gave the Hawkeyes a 24-18 advantage. Minnesota won the next two points before Buzzerio racked up another kill to secure a 25-20 set win.

Iowa dropped set four but began set five on a 4-2 run. Minnesota answered with a 5-2 run of their own before a kill by Mariani and a kill and block by Brobst extended the Hawkeye lead to 9-6. The visitors used a 5-0 run to take an 11-9 lead before Iowa took a timeout. Janota amassed two kills after the timeout, but Minnesota hung on for the 15-11 set win and the 3-2 match victory.

The Hawkeyes take the court again tomorrow to face their second Top-5 team in as many days when they host No. 4 Wisconsin. The match is slated for a 7 p.m. first serve in Carver-Hawkeye Arena.