No. 6 Florida Takes Down Alabama In Sweep On Senior Day 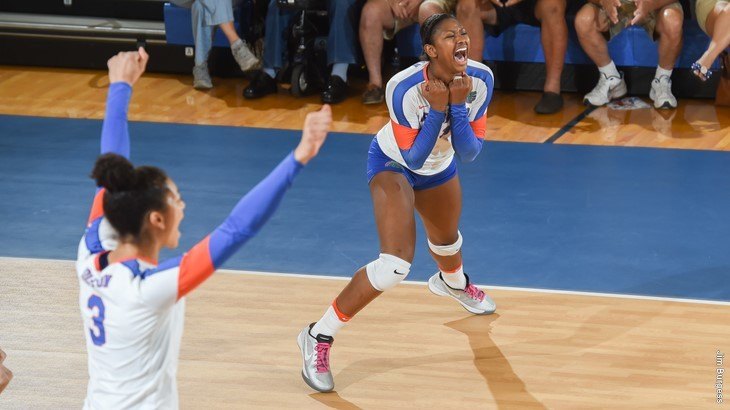 GAINESVILLE, Fla. – The No. 6 Gators added a half-game to their lead atop the SEC standings and picked up their 12th consecutive victory, defeating Alabama in straight sets after a senior day ceremony honoring three-time All-American right side Alex Holston.

Florida has now swept its last eight matches, its longest run since a streak of nine consecutive straight-set victories from Sep. 17-Oct. 13, 2013. The Gators last dropped a set at Texas A&M (Oct. 16) and have won each of the 26 sets they played since losing the second set in College Station.

UF’s defense was spectacular all afternoon. The Gators held Alabama to a .000 hitting percentage, marking their best efficiency defense since holding New Hampshire to a -.067 clip in last year’s NCAA Tournament First Round match. They also held Alabama’s Krystal Rivers, the SEC’s leader in kills per set (5.85), to seven kills and a .000 clip.

Redshirt sophomore setter Allie Monserez kept the offense flowing, posting 35 assists and 11 digs for her fifth double-double of the season.

The opening set saw both teams remain within two points of one another, until a three-point service run by freshman Chanelle Hargreaves allowed the Gators to pull away for a 25-18 win. After winning six of the final eight points for a 25-16 victory in set two, UF dominated the clinching set, holding Alabama to a -.103 clip in a 25-12 rout.

SEC Network will provide live television coverage from Columbia. Fans can also listen to the match on ESPN Gainesville 95.3 FM / 850 AM, with Tom Collett on the call. First serve is slated for 4 p.m. ET.

The two teams were evenly matched to open set one, with eight tie scores in the first half before Florida took a 13-12 lead at the halfway point. The Gators led by two at the media timeout, 15-13, and extended it to a three-point lead at 19-16 as the Tide took its first team timeout. Florida used a 4-1 run after the break to extend its lead to 23-17 and Alabama took its final timeout of the set but the Gators held on to win set one, 25-18.

Alabama took its first timeout early in set three after Florida built an early 5-1 lead and the Gators soon doubled its lead to eight points as the Tide burned its final timeout trailing 10-2. Florida continued to power ahead, building a double-digit lead at 19-9 and eventually winning the set, 25-12, to complete the sweep.