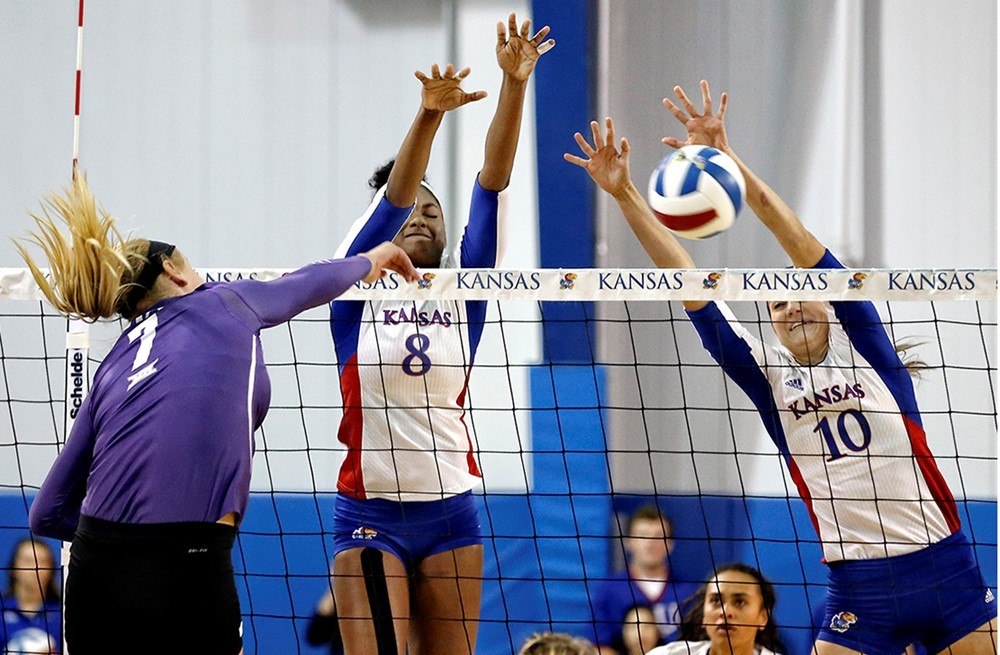 In the first Sunflower Showdown between Kansas and Kansas State, the Jayhawks swept the Wildcats.

Madison Rigdon led the way for Kansas with 14 kills, while Kelsie Payne and Tayler Soucie each contributed 11. Soucie picked up six blocks, four of which came in an early 9-0 run for the Jayhawks in the first set.

The Wildcats Alyssa Schultejans came off the bench to put down 14 kills for a season-best. Setter Katie Brand, the Big 12 conference leader in assists, handed out 30 along with six digs.

LAWRENCE, Kan. – Senior middle blocker Tayler Soucie set the tone early during the season’s first volleyball edition of the Dillons Sunflower Showdown by recording four blocks during an early 9-0 run in the first set against in-state rival Kansas State. The sixth-ranked Jayhawks didn’t look back on the way to a 3-0 (25-15, 25-20, 25-23) victory over the Wildcats inside another sold-out Horejsi Family Athletics Center.

“That blocking display was pretty impressive. It obviously set the tone,” Kansas head coach Ray Bechard said. “When you block for points like that, that can really get your team going. That was a really great way to start it. That’s a very good K-State team. We were pretty motivated to play well tonight.”

Junior outside hitter Madison Rigdon led the Jayhawks with 14 kills, while junior All-American right-side hitter Kelsie Payne and Soucie each had 11. Freshman outside hitter Jada Burse added eight kills, as the group of four accounted for all but three of KU’s 47 kills.

Kansas increases its home winning streak to 12 matches after defeating its in-state rival for the fourth-straight time.

Soucie’s four first-set blocks helped start the first set with a boom. K-State scored the first point of the match, followed by a side-out kill from Payne to tie it, 1-1. Soucie then proceed to be involved in four-straight block-assists to give Kansas a commanding 5-1 lead and forcing an early K-State timeout. Coming out of the timeout, Kansas continued to pour it on during a 9-0 run to take a 9-1 lead. Rigdon started strong as well, recording five kills on six swings in the first set as the Jayhawks took a 25-15 decision.

Kansas used a strong finish to take the second set, 25-20. The second stanza featured four lead changes and nine ties until the Jayhawks closed the set on a 5-1 run. Kelsie Payne had a team-high seven kills in set two.

The Jayhawks worked their way to a 16-11 lead in the third set, but the Wildcats slowly clawed back and nearly extended the match beyond three sets. Kansas native Soucie, who started the match on fire, also put the finishing touches on the sweep with a kill from a cross-court slide attack on KU’s third match point, giving KU a 25-23 third-set win.

“I think this team is getting more comfortable with who they are,” Bechard concluded. “Players have a tendency to look in the rear-view mirror at teams from the past, and this team is starting to get comfortable in their skin and knowing what they can do to be successful. We play together and we play hard.”

UP NEXT
Kansas continues its ‘purple week’ with a road match in Fort Worth, Texas against TCU on Saturday at 5 p.m. Central.

KANSAS-KSU SERIES
The Jayhawks defeated K-State for the fourth-straight time, dating back to 2014. In the last nine matches, the Jayhawks are 8-1 against the Wildcats. K-State leads the all-time series, 61-43.

HOME DOMINANCE
The Jayhawks won their 12th-straight match inside Horejsi Family Athletics Center on Wedesday. In the last 30 matches at home, Kansas is 29-1.

LAWRENCE, Kan. – Sophomore outside hitter Alyssa Schultejans came off the bench to record a season-high 14 kills but the Kansas State volleyball team was unable to overcome an early deficit, falling to No. 6 Kansas in three sets (25-15, 25-20, 25-23) Wednesday night at Horejsi Family Athletics Center.

“We got better as the match went,” said head coach Suzie Fritz. “We did gain some momentum as the match went on but we can’t allow three hitters to hit over .350 and have any expectations of being in a match. We weren’t good enough offensively or defensively. We weren’t purposeful with our swings.

“I thought we had two bright spots,” Fritz added. “Alyssa Schultejans came in and played really well and Bryna Vogel did a nice job digging balls and being efficient.”

Behind Schultejans, the Cats gained traction as the match wore on, each set hitting at a higher efficiency than the prior one. K-State was within a point in the second set at 20-19 before the Jayhawks scored five of the final six points to close out the frame. The Silver Lake, Kansas, native recorded five of her 14 kills in the second set. Vogel, a junior right-side hitter, added four kills on nine swings without an error (.444).

Late in the match, K-State fought off two match points and brought the score to 24-23 before KU closed out the straight-set victory.

Schultejans registered her Big 12 career-high 14 kills on a .310 attacking percentage (5e-29ta). Vogel finished with eight kills without an error on 20 attempts (.400) and tied for the team lead with libero Kersten Kober with 12 digs.

Setter Katie Brand, the conference’s leader in assists, handed out 30 to go along with six digs. Middle blockers Zsofia Gyimes and Macy Flowers, along with Vogel, each tallied a pair of blocks on the night.

KU has now won the last four meetings in the Sunflower Showdown and eight of the last nine in the series.

K-State will travel to Norman, Oklahoma, to take on the Oklahoma Sooners for its second straight conference road match. First serve is slated for 6 p.m., and can be heard on local radio at 1350 KMAN and at k-statesports.com.

·         Schultejans’ 14 kills set a new season and conference career high. It is the second time this season and 14th time in her career that the sophomore has reached 10 or more kills in a match.