No. 8 Kansas Opens Big 12 Play With Sweep Over Oklahoma 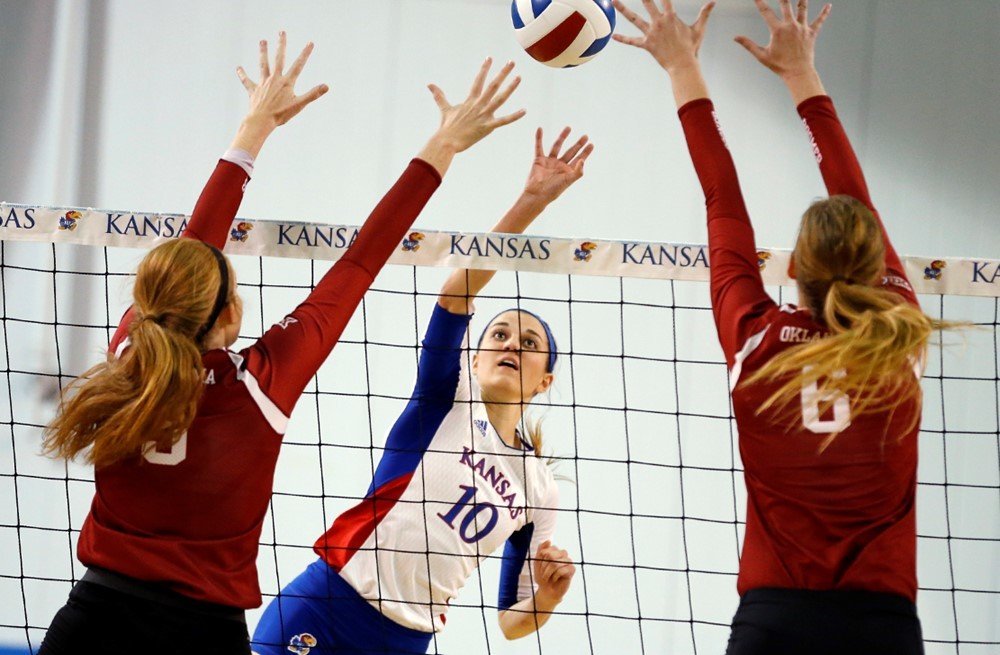 The Jayhawks hit for .242, while holding the Sooners to .092 off of Kansas libero Cassie Wait’s 23 digs, her third three-set match with over 20 digs this season. Tayler Soucie contributed 10 kills on a match-high .444 hitting percentage and putting down five blocks.

Oklahoma Kimmy Gardiner and Marion Hazelwood each added eight kills, and Gardiner also picked up 16 digs for the Sooners.

LAWRENCE, Kan. – Oklahoma came into Horejsi Family Athletics Center as one of the most dynamic offensives in the Big 12 Conference, but eighth-ranked Kansas stopped the Sooners cold on Wednesday night in front of a national television audience in straight sets, 3-0 (25-17, 25-13, 29-27), to open league play.

Kansas (12-1, 1-0 Big 12) held OU’s offense, which ranked 19th in the NCAA in hitting percentage entering Wednesday, to a .092 hitting percentage led by 23 digs from senior libero Cassie Wait – her third three-set match with over 20 digs this season. Senior middle blocker Tayler Soucie and freshman outside hitter Jada Burse paced KU with five blocks each, including two solo blocks from Soucie in the third set.

“Defensively, I thought that this was our best effort of the season. We held them to .092 hitting percentage – a team that has a ton of weapons,” Kansas head coach Ray Bechard said. “First and foremost I thought that was the key. When we hold teams under .100, it speaks volumes to (libero) Cassie Wait and some opportune blocks by Tayler Soucie.”

Oklahoma (9-5, 0-1) was led by eight kills apiece from Kimmy Gardiner and Marion Hazelwood.

Junior All-American right-side hitter Kelsie Payne registered her first of two aces on the night to help KU pull-away in the first set during a 4-0 run to put the Jayhawks up, 17-11.

Burse, tabbed as Big 12-ready when she signed last November, proved early that she can make a difference in the Jayhawks’ starting lineup. The DeSoto, Texas native connected for four kills on five swings in the opening set to led KU to a 25-17 first-set victory.

Kansas started the second set on a 4-0 run and didn’t look back. Junior outside hitter Madison Rigdon registered five second-set kills as KU didn’t surrender its lead for the duration of the set. Redshirt freshman Patricia Montero capped off the second-set 25-13 victory with an ace off her high-velocity jump serve.

In the third set, junior All-American setter Ainise Havili broke her second computer monitor of the season after reaching for a ball over press row and slamming into play-by-play voice of Kansas volleyball Derek Johnson’s computer. But Havili’s effort kept the ball in play, passing it to Rigdon for an eventual kill to tie the third set at 20.

The Jayhawks were able to complete the sweep of the Sooners in the third set which featured 17 ties and 12 lead changes. Kansas staved off two Sooner set-points, including a 26-25 deficit, as Payne registered a kill to give KU its second match point, 28-27.

Montero’s aggressive serving put pressure on OU all night, but it was her one kill that finally clinched the match for Kansas in the third set, 29-27.

UP NEXT
Kansas hits the road to face No. 5 Texas on Saturday night (7 p.m. Central, Longhorn Network) in the first road match of Big 12 Conference play. The Longhorns and Jayhawks – both 2015 Final Four teams – have finished first- and second-place in the Big 12 standings, respectively, in the last four seasons.

LAWRENCE, Kan. – The University of Oklahoma volleyball team lost its Big 12 conference opener at No. 8 Kansas, 3-0, at the Horesji Center on Wednesday evening. The Sooners dropped to 9-5 overall and 0-1 in league games, while the Jayhawks improved to 12-1 and 1-0.

The straight-sets loss came by scores of 25-17, 25-13 and 29-27. Oklahoma used a 3-0 run in the first to close an early gap to 13-11, but Kansas answered with four in a row before pulling away. The Jayhawks were staked to an early 4-0 lead in the second that forced a Sooner timeout and paved the way for a quick victory as they hit .300 for the set.

Oklahoma overcame a 3-0 Kansas start in the third and claimed its first lead of the set at 9-8 on back-to-back kills from senior outside hitter Kimmy Gardiner (Grapevine, Texas). In a set that featured 17 ties and 12 lead changes, the Sooners twice had set-point with a chance to force a fourth, including a 26-25 advantage following a combination block from redshirt-senior outside hitter Madison Ward (Lawton, Okla.) and junior middle blocker Marion Hazelwood (Beach City, Texas).

The Jayhawks got to their second match-point of the night before committing a service error out of a Sooner timeout, but ultimately put the game away on a kill from Patricia Montero.

Oklahoma is off this weekend and returns home to face No. 5 Texas on Wednesday, September 28. The game will serve as the team’s annual “Pledge for a Cure” match and will air nationally on ESPNU.