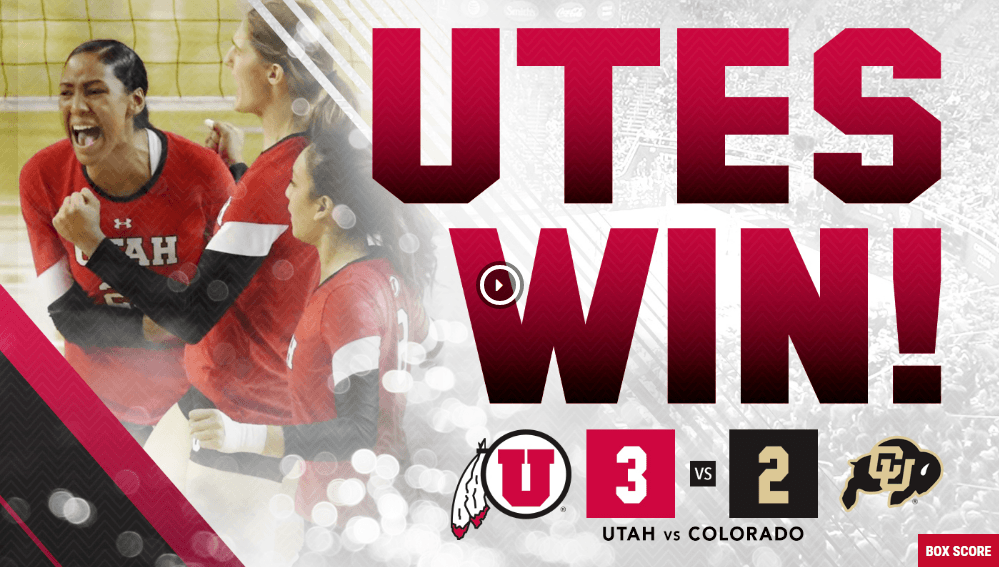 The Utah Utes, even with only 2 losses, entered Pac-12 Conference play unranked, though they did receive a handful of votes in the latest AVCA Top 25 polls. That’s sure to change next week after beating their second highly-ranked opponent of the season on Wednesday, on the road, against Colorado.

Just like their earlier win over then-#9 BYU, this was a hard-fought 3-2 win for the Utes.

The two teams came out fairly evenly matched in overall game statistics (similar hitting percentages, similar serving success, similar blocking), but the key for the Utah victory was their consistency across the 5 frames. Whereas Colorado hit very well in the two sets they won (.438 and .308, respectively), they were well off in the first and fourth sets, which went the way of the Utes (.021 and .029, respectively).

Then, in the fifth-and-deciding set, the Utes actually dominated the run of play in both directions. In that set, Utah scored 17 of its own 20 points on kill shots, but Colorado scored 10 of its 18 points on Utah mistakes.

The aggressiveness paid off for the road-team, though, as they came away with the win. Adora Anae led the way with 27 kills for Utah (5.4/set), and she also chipped in 2 solo blocks, 2 block assists, and 16 digs. During the match, Anae recorded her 1000th kill for Utah – making her the 17th player in school history to hit that mark.

Utah Junior Adora Anae registered a match-high 27 kills and collected 16 digs for her ninth double-double of the season, all the while also managing to collect the 1,000th kill for her career in a Utah uniform. Anae becomes just the 17th player in school history to earn a membership into the elite 1,000-kill club.

Utah opened the night cruising to a 25-18 win in the first set. The Utes tallied 14 kills and a .244 hitting percentage, while limiting the Buffs to just 11 kills on .021 hitting in the frame.

Colorado would rally with a 5-1 run to get back within seven points, but Anae’s 20th kill of the night, followed by Luafalemana’s and Katoa’s block pushed the match to a fifth set with Utah taking the frame 25-16.

Both teams traded points to open the fifth set before a 3-0 run gave the Utes an 8-5 advantage. With both teams trading sides of the net, Colorado managed to counter Utah’s run with a 4-0 run of its own and take a 9-8 lead, which happened to be the very first lead change for either team on the evening.

Utah called a timeout and opened a 4-0 run with a block from sophomore Berkeley Oblad. Trailing 12-9, Colorado again came back with another run, this time scoring five of the next six points to take a 14-13 lead.

Down match point, Utah called its final timeout of the evening and then came out of the break with back-to-back kills from Anae. Her 25th kill of the match gave Utah a 15-14 advantage and it was the junior’s 1,000th kill of her career.

WHAT HAPPENED: Sophomore Alexa Smith led the Buffs with 18 kills and added 12 digs for her fifth double-double of the season. Teammates Gabby Simpson and Joslyn Hayes each added another 11 kills in the five-set thriller. Defensively, Cierra Simpson led the match with 23 digs and Naghede Abu posted a team-best seven blocks.

SET 1: Utah took control of the set from the start, taking a 5-1 lead before CU used its first timeout. The Utes increased the advantage to 15-8 when the Buffs had to call their second break of the set. The Buffs rallied back, bringing the score within four points at 22-18, but were not able to finish the comeback with Utah taking the final three points of the set (25-18).

SET 2: Colorado got off to a much better start in set 2, taking an 11-5 lead, thanks in part to a 6-0 run which included three straight kills from Gabby Simpson. The Buffs did not let up, increasing the lead to 10 points, and closed the frame 25-15. CU hit .428 in the set, while Utah was held to a .188 hitting efficiency.

SET 4: The Utes took the lead in the beginning of the set and led 15-8 at the media break. Utah kept attacking and increased their lead to 19-8, forcing the Buffs to take a timeout. Alexa Smith answered for the Buffs with a kill and the Buffs were able to bring the score within seven points (20-13), but ultimately the deficit was too large for CU to overcome and the Buffs fell 25-16.

SET 5: The two teams exchanged the first 10 points before Utah went up 8-5 at the media timeout. The Buffs rallied back and took a 9-8 advantage, causing Utah to take a timeout. The sides continued to battle and needed extra points to finish the set. CU had four match points, but was unable to convert before the Utes finished the set 20-18 on their second match-point.

STANDOUT PERFORMANCE: Gabby Simpson recorded the second triple-double of her career in the effort with 11 kills, 24 assists and 11 digs.

NOTEABLE: The Buffs are now 8-3 on the season, 5-1 at home… Utah is 10-2 this season…Utah leads the all-time series between the two schools 9-7… Three of the last four matches against these two schools have gone five sets…The Buffs are 168-89 all-time when ranked in the poll…

NEXT UP: Colorado hosts Arizona on Sunday, Sept. 25, at 1 p.m. at the Coors Events Center.

QUOTABLE:
Jesse Mahoney, head coach
On How The Match Was So Up And Down For The Team
“It was a really uneven match. The first four sets, none of them were competitive. If someone was out ahead early, they just steamrolled. The fifth set was really well played; a competitive match on both sides. If we pass well, we’re a really good team. If we don’t, we become predictable and we struggle to score like a lot of teams. You can look at sets two and three where we won; we passed extremely well. Even in set five, we passed pretty well and it just didn’t go our way. We’ll find a way to learn from it, regroup, and get ready for this weekend.”

On How Cierra Simpson Passed Karrie Downey For The All Time Digs Record
“Karrie is probably one of the best all-around volleyball players in CU volleyball history. If you look at our stat book, her name is all over it from an offensive and defensive standpoint. Cierra has a very similar defensive and passing game to Karrie. It’s amazing for Cierra to get that record because there’s a lot of really good players that have come through here.”

On What The Team Has To Work On To Get Ready For Sunday
“There’s not one thing. We work on everything, all the time. We have to get better at every piece of the game. We’re going to do what we normally do…try to get a little better at it. After every point we lost, our team can look and see “This is what we did” and “This is why that happened”. We’re at that place now. As we go through the season, we’re going to have to start self-correcting in games and not just off the bench. Every match is going to be like this. Every match is going to be tough, whether we’re on our home floor or somebody else’s.”

On The Importance Of Every Conference Game
“We have 19 more matches so the sky’s not falling just yet. You want to win at home because it’s tougher on the road. We have to find a way to steal one back, whether it’s stealing one from Utah or stealing one from somebody else. We’re going to have to get one more than we maybe should have.”

Joslyn Hayes, junior outside hitter
On the Upcoming Arizona Match
“I think we had a lot of plays where we just weren’t disciplined. Volleyball is a game of being disciplined, and we had a lot of trouble in that. We were kind of up and down, like Jesse and Cece said. Coming back, I think we need to refocus and revamp. Ultimately, losing [these games] is not that much fun but we need to come back ready to compete, disciplined and focused against Arizona.”

On the Up And Down Play
“Adding onto my last comment, volleyball is a game of being disciplined. It’s also a very mental game. I think that we were over-thinking a lot of things that we know exactly how to do, and we know how to refocus and fix and we didn’t do that faster. I think that’s ultimately what killed us.”

On Talking To The Team After The Loss
“Like I had said before, it really stinks to loose. Especially like that, a nail-bitter like that, [when it is] that close. When you’re that close, it’s very upsetting. But, if we are going to take anything from it, Jesse had said, if we’re going to take anything from it, it is learn from the game. Like I said, we weren’t disciplined, we weren’t focused. We need to learn from that and we need to come back ready, on fire, against Arizona.”

Cierra Simpson, senior libero
On Takeaways From Match
“I think kind of like what Jesse said, trying to keep it consistent in all areas. I think that’s been the first match we’ve had that’s been so extreme up and down. We know we’re better than that, we know that we can play more consistently. Especially like he (Coach Jesse) said, when we pass well, we’re a really good team. So I think we can really just hone in on those little, tiny details in practice the next couple of days and we can be ready to go on Sunday.”

On Contributing Factors To Back And Forth Play
“Passing was definitely part of it. But little, tiny small communication errors also contributed. Errors at the wrong times and inconsistent play on our part.”