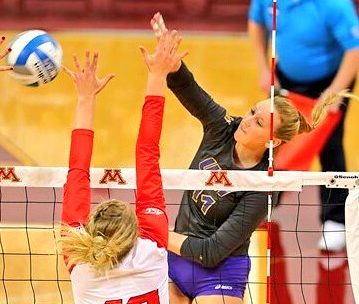 Karlie Taylor, Jr., OH, UNI
Last week, UNI junior Karlie Taylor recorded 41 kills in two matches to help the Panthers stay undefeated in MVC play. The junior outside hitter recorded 18 kills in the teams three set victory over Illinois State on Friday night. Taylor also recorded 11 digs, one assist, a single solo block and a block assist. She led the Panthers with 23 kills on Saturday in a 3-1 win over Bradley. Taylor also recorded 14 digs and one service ace in the win over the Braves. For the Week, Taylor hit .283  while recording 3.57 digs per set, 5.86 kills per set and 6.21 points per set.

With 4.86 kills and 3.57 digs per set last week to lead @UNIVolleyball to a pair of wins, Karlie Taylor is the #MVCVB Player of the Week! pic.twitter.com/l5CPIdNtHw

Kendyl Sorge, Sr., L, UNI
UNI senior Kendyl Sorge needed only 37 digs to move her into the 2,000 career dig club entering the weekend.  With 20 digs in Friday night’s 3-0 win over Illinois State and an additional 20 digs on Saturday against Bradley, Sorge sits at 2,003 career digs, good enough for second all-time in program history. In the Panthers victory over the Redbirds, Sorge recorded 20 digs and two assists. In a 3-1 wi nover Bradley on Saturday, Sorge added 20 digs and seven assists. Sorge finished the week averaging 5.71 digs per set.

Averaging 5.71 digs last week to move her into the 2⃣0⃣0⃣0⃣ dig club, Kendyl Sorge of @UNIVolleyball is the #MVCVB Defensive Player of the Week! pic.twitter.com/v5wMmedUsO

Amelia Flynn, Fr., OH, Missouri State
Amelia Flynn tied a Missouri State freshman record with 26 kills in Saturday’s win at Evansville, and averaged 4.33 kills, 3.56 digs and 4.72 points per set in two weekend matches. Flynn’s 26 kills Saturday came on .364 hitting, equaling performances by Lily Johnson in 2014 and Vanessa Wouters in 1994 for the most kills by a freshman in school history. Flynn added 15 digs and two aces against UE. In Friday’s victory at Indiana State, Flynn set a career high with 17 digs and had 13 kills for the double-double.

Setting an MSU freshman record with 26 kills on Saturday and helping the #MSUBears to two road wins was more than enough to earn Amelia Flynn her second MVC Freshman of the Week award this season.