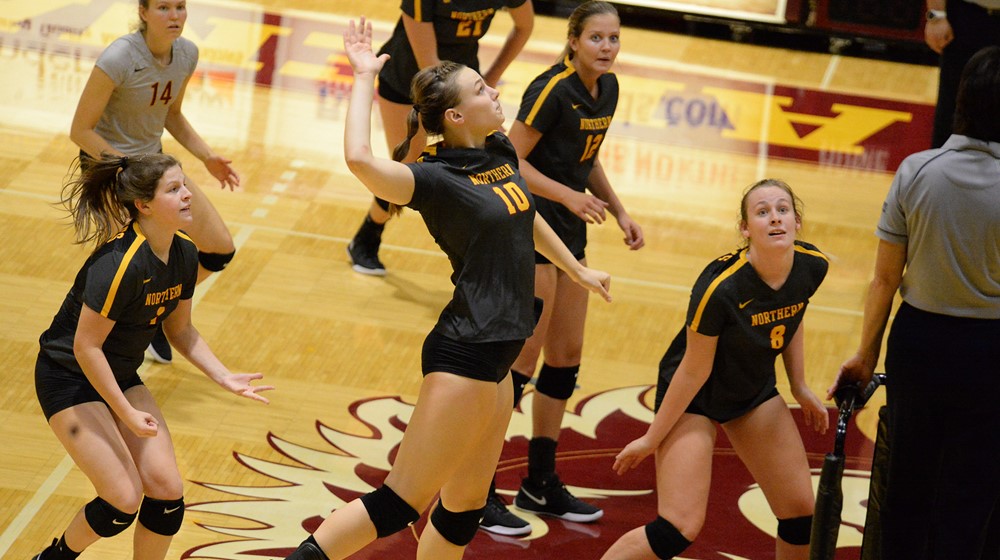 Northern State continued its steady rise in the AVCA Division II Poll, taking over the top spot with a 3-0 mark this past weekend to remain undefeated on the season. It is the Wolves first appearance at the top of the AVCA poll. Current Photo via Northern State Athletics

Northern State continued its steady rise in the AVCA Division II Poll, taking over the top spot with a 3-0 mark this past weekend. It is the program’s first ever top AVCA ranking.

A big time congrats to @nsuwolves_v for getting their first #AVCA No. 1 ranking in program history! https://t.co/KMMdN2SsOW pic.twitter.com/3VD8qLc1yY

The Wolves, who downed MSU-Moorehead, Bemidji State and Minnesota-Crookston in straight sets, to remain undefeated (13-0) on the season received 41 of 47 first place votes and collected 1,168 points.

Concordia-St. Paul jumped up one spot to 2nd nationally with a 3-0 week of its own. The Golden Bears, who have won each of the last 2 national championships and 9 all-time, defeated Minnesota State (3-0), 18th-ranked Wayne State (3-0) and Augustana-SD (3-2). CSP, which received 6 first place votes and 1,107 points this week, is riding an 8-match win streak.

Washburn joined the poll at 21st after receiving votes last week. The Ichabods went 2-0 with a 3-set win against Fort Hays State and a 4-set upset victory over then-ranked 1st Nebraska-Kearney. On the season, Washburn is 14-0.

Findlay, which was 24th in week 3, was the lone team to drop out of the standings. The Oilers went 2-1 on the weekend.

10 teams mentioned in only one ballot for a total of 79 combined points.