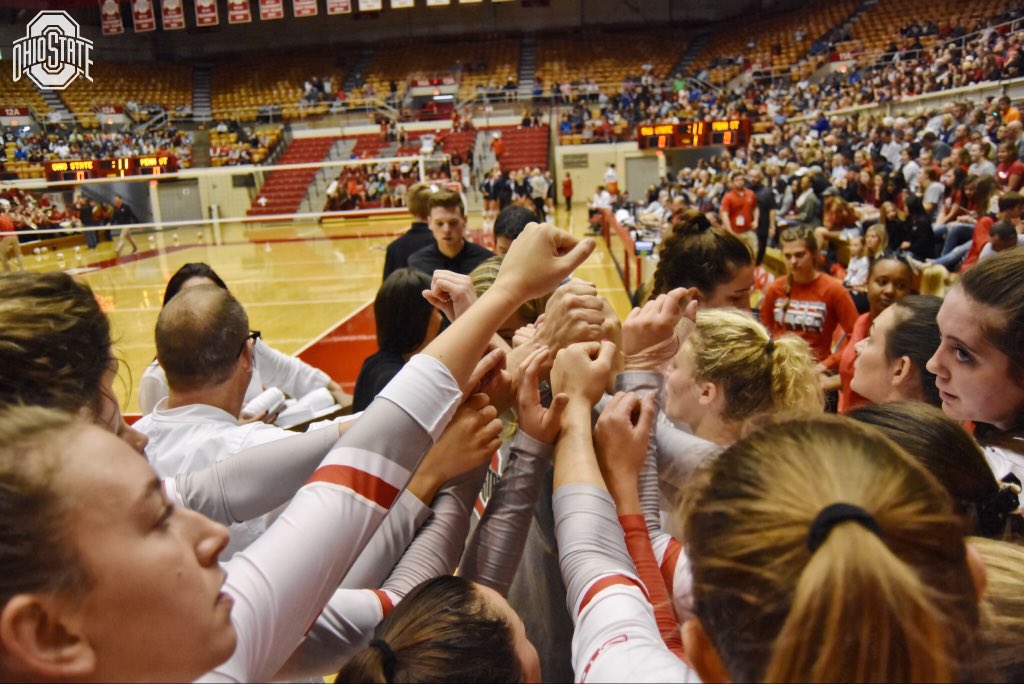 The Ohio State women’s volleyball team, fresh off a Sunday's upset of Penn State, continues Big Ten action when it squares off with Indiana and Maryland this week.  Current Photo via Ohio State Athletics

COLUMBUS, Ohio – The Ohio State women’s volleyball team continues Big Ten action when it squares off with Indiana and Maryland this week. The Buckeyes will have a midweek test live on the Big Ten Network at 7 p.m. when the Hoosiers come to town Wednesday before visiting the Terps on Saturday at 7 p.m.

HISTORY WITH THE HOOSIERS AND TERRAPINS

Ohio State has taken 52 victories from its 79 meetings with Indiana. The Buckeyes have won the last two matchups, including a straight-set triumph in the lone outing between the teams a season ago. Dating back to the 2010 season, Ohio State has beaten Indiana in 11 of the last 12 contests.

The Buckeyes own a 10-3 lead in the all-time series with Maryland. Ohio State swept the home-and-home series last year and only dropped one set. The Scarlet & Gray defeated the Terps in straight sets at home before earning a 3-1 decision in College Park.

Indiana split a pair during its opening weekend of conference play. The Hoosiers topped Northwestern, 3-1, before they fell to then-ranked No. 8 Illinois in five sets. Deyshia Lofton currently ranks third in the Big Ten with a .399 hitting percentage, which comes in at No. 19 nationally. Bayli Lebo is sixth in the league with 4.37 digs per set.

Maryland is coming off a 3-0 loss to then-ranked No. 7 Minnesota on Saturday night. Erika Pritchard leads the Terps and ranks third in the Big Ten averaging 4.22 kills per set. Teammate Allegra Rivas’s 4.69 digs per set checks in fifth while Katie Myers tops the conference with 28 service aces, the 10th-best mark in the country.

DOWN GOES NO. 4 PENN STATE

Ohio State stunned No. 4 Penn State on Sunday afternoon with a 3-1 victory inside St. John Arena. The Buckeyes beat the Nittany Lions for the first time since 2016 to secure their first Big Ten victory of the season. Mia Grunze had the first double-double of her career behind 12 kills and 13 digs. Jordan Fry tied her career mark with 11 kills and had seven blocks, followed by Lauren Witte with 10 kills and six rejections. Madison Smeathers chipped in eight kills and three blocks while Becca Mauer spread 39 assists around and dug 13 balls for a double-double. Hannah Gruensfelder paced the defense with 17 digs and Camry Halm added 14 digs to the stat sheet.