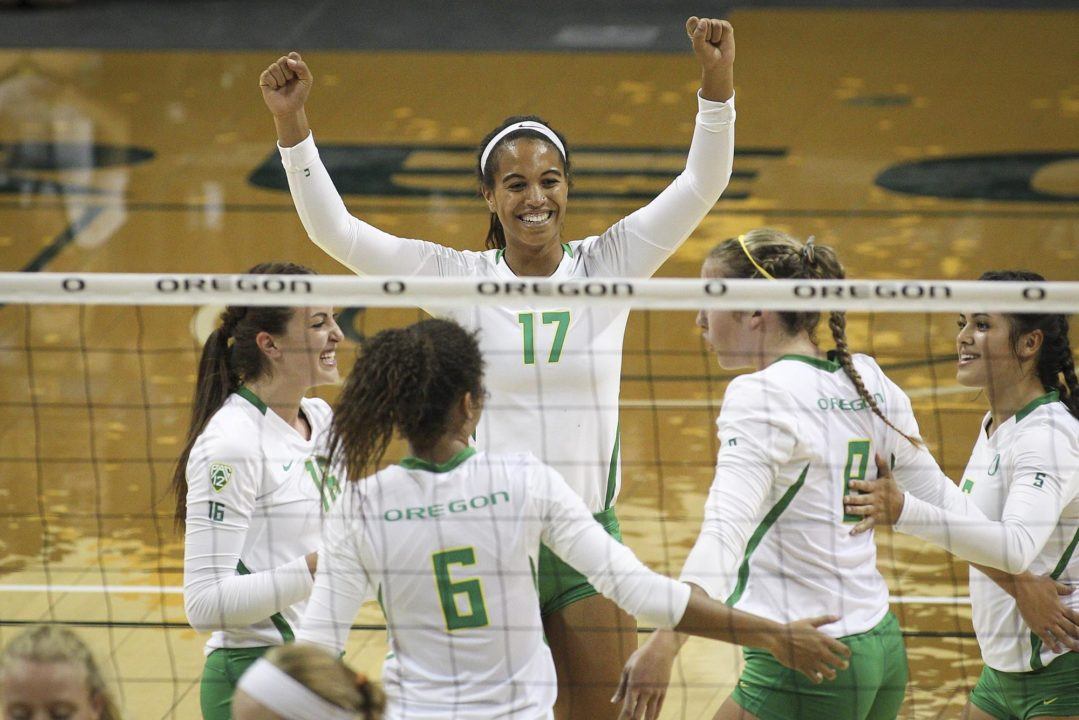 Oregon continues their 11 match winning streak with the four set victory over Arizona.

McKenzie Jacobson led the way for Arizona with 16 kills on a .462 hitting percentage. Laura Lason picked up her season-best 23 digs. Katarina Pilepic recorded a double-double with 12 kill and 10 digs.

How It Happened: Oregon (11-2, 4-0 Pac-12) got off to a strong start with a commanding win in the opening set before Arizona (10-6, 2-2 Pac-12) responded with an impressive second game to tie things up. The Ducks found their groove in the third to take a 2-1 lead, and outlasted the Wildcats in the fourth set to preserve their 11th straight win and remain undefeated in conference play.

Freshman Ronika Stone led the Ducks with a terrific performance, putting down a season-high 13 kills on .632 hitting and also adding an ace and a match-high five blocks. Junior Taylor Agost was right behind with 12 kills while hitting .458. The Ducks also got a pair of double-doubles, as August Raskie picked up her second with 23 assists and 11 digs and Lindsey Vander Weide recorded her team-best sixth double-double with 10 kills and 16 digs. Freshman Jolie Rasmussen added nine kills while hitting .320, and Amanda Benson led the Ducks with 18 digs. The Ducks out hit the Wildcats .272 to .199, and had 11 team blocks to Arizona’s three.

Set 1: The Ducks got out to a fast start, opening up a 12-4 lead early on. Arizona responded with a 4-0 run, but Oregon got back on track to open up a 17-11 lead. The Ducks then answered three straight Wildcat points with 6-2 run to get to 23-16, and kills by Stone and Agost finished off the opening game win. Agost led the Ducks with six kills on 10 swings, Johnson recorded kills on all four of her swings and Rasmussen put down three balls.

Set 2: After an early 6-6 tie, the Wildcats began to gain some momentum and opened up a 15-9 lead aided by a 4-0 run. The Wildcats would then open up a 22-14 lead, and the Ducks responded with a 5-2 run to get within 24-19 and force an Arizona timeout.  Agost and Stone would put down kills to get the Ducks within three and force another Wildcat timeout, but Arizona’s Kalei Mau finished off the set with a kill. Stone led the Ducks with kills on all four of her swings while Agost added three, and Raskie led the way with five digs.

Set 3: The Ducks came out of the intermission hot, going on an 8-1 run to take an 11-4 lead after an initial 3-3 tie. The Wildcats got within 12-7 before the Ducks took off again, scoring six of eight points to double up Arizona at 18-9. The Wildcats scored three straight later on to pull within 19-13, but the Ducks finished the set with a 6-4 run to take a 2-1 lead in the match with Stone ending it with her 10th kill. Stone was once again the Oregon leader with four kills, while Benson dug everything that came her way to finish the set with 11 digs.

Set 4: Oregon got off to another strong start in the fourth set, racing out to an 11-5 lead and forcing Arizona to burn both of its timeouts early on. The Wildcats responded with a furious rally, however, going on a 6-0 run to tie the set, 11-11. The two teams then went back and forth, playing to a 22-22 tie with the Ducks taking a late timeout. Four points later at 24-24, kills by Vander Weide and Stone gave Oregon a 26-24 set win and a 3-1 victory in the match. Vander Weide came on strong in the final set with an ace and four kills to finish with a double-double, while Stone added three kills and an ace.

What It Means: After playing 10 of their first 11 matches at home, the Ducks went on the road and picked up conference road wins on back-to-back nights. The freshmen continue to shine early on, with Stone becoming a center piece in the Ducks’ game-plan and Rasmussen and Johnson both adding solid contributions on offense. Behind veterans like Benson, Agost and Vander Weide, the Ducks are starting to make some legitimate noise in a loaded Pac-12 conference.

The Streak: With Oregon’s winning streak now at 11 matches, the Ducks are just three wins shy of the program record of 14 consecutive wins (2010, ’12). During the streak, the Ducks are hitting .337 as a team while holding opponents to a .141 mark, and are averaging 2.46 blocks per set compared to 1.22 by its opponents. Vander Weide is leading the way with 3.16 kills per set while hitting .322, while Stone and Agost are both hitting better than .440. Benson, who entered the weekend as the Pac-12’s leader in digs per set, has continued to be a defensive juggernaut averaging 5.32 digs per set during the run.

Up Next: The Ducks and their 11-match winning streak return home for another lengthy home stand, as they’ll host four straight matches at Matthew Knight Arena. Oregon will open against No. 7 Washington next Friday at 8 p.m. on ESPNU.

The Cats took the 21st-ranked Ducks to four sets, and nearly extended the match to a fifth set, but fell in the fourth 26-24.

“I thought at times that we played well,” said head coach Dave Rubio. “I am frustrated that we didn’t play well at all of the right moments. I felt like we were playing from behind a lot in this particular game. The thing that we know is that we have got to be very good at the service line and tonight we weren’t. They were better than we were. Our serve receive wasn’t that sharp and so that hurts us. Until we can get our full line up back, it is going to be a little harder for us to score against the upper level teams in the conference.”

McKenzie Jacobson posted a career-high 16 kills on .462 hitting to lead the Wildcats. Overall, the Cats posted 57 kills on .199 hitting. Oregon’s offense was red-hot; its 55 kills came on .272 hitting, including a blistering start to the match, .424 in the first set.

“I think the scouting was helpful, and the passing and setting was great,” said Jacobson of her big night. “It’s a team effort, so without the passing and the sets, I wouldn’t be able to do it.”

Oregon dominated at the net, outblocking Arizona 11-3 in the match. The Wildcats won the battle in the back row though, outdigging Oregon 69-61. Laura Larson had a season-high 23 digs in the match while Penina Snuka (38 assists, 11 digs) and Katarina Pilepic (12 kills, 10 digs) each had double-doubles.

Despite hitting .294 in the opening set, the Wildcats could not slow down Oregon’s offense as the Ducks led wire-to-wire in a 25-19 first-set victory.

The Wildcats responded in the second set. UA kept the Ducks offense in check, while Pilepic got it rolling with five kills to lead Arizona to a 25-21 second-set win.

Oregon dominated the third set out of the break, beating the Wildcats 25-17 to take a 2-1 lead.

The Ducks edged Arizona 26-24 in the fourth.

UP NEXT: Arizona hits the road for four straight matches, beginning next week in Los Angeles. UA heads to USC on Friday before taking on UCLA on Sunday. Both matches will be carried by the Pac-12 Networks.