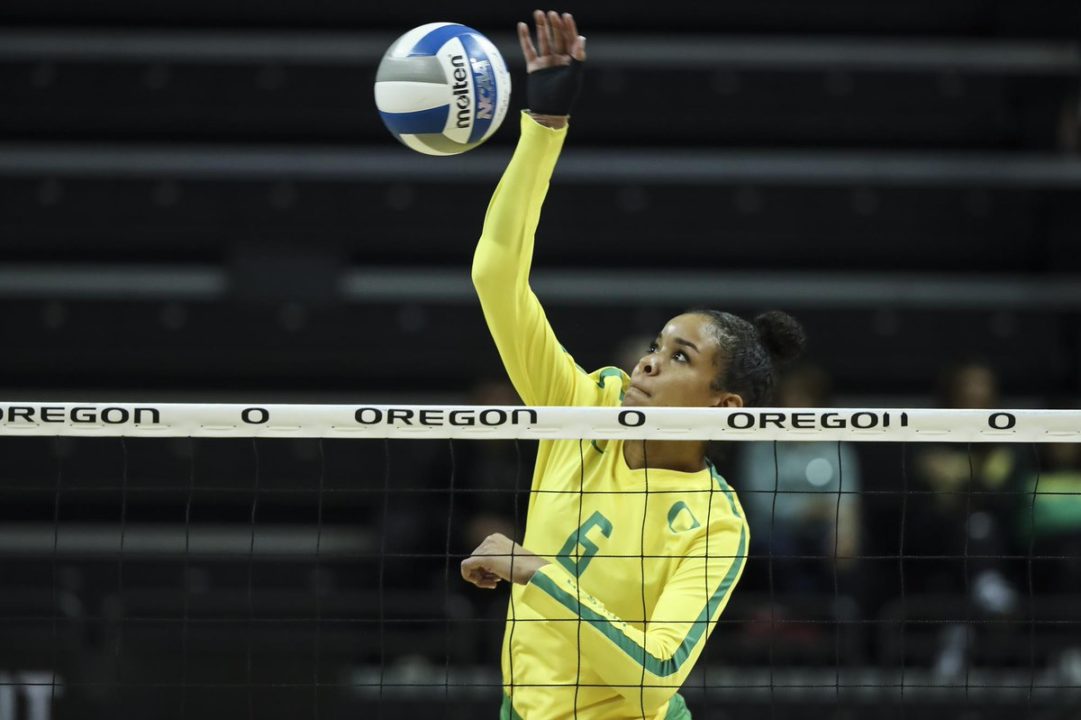 The Pac-12 kept the Big Ten at bay as Oregon and Stanford earned wins over Minnesota and Penn State.  Current Photo via Oregon Athletics

The Pac-12 kept the Big Ten at bay as Oregon and Stanford earned wins over Minnesota and Penn State on Day 1 of the Pac-12/Big Ten Challenge. It was the first loss of the season for both the Gophers and Nittany Lions.

In the opening match of the Pac-12/Big Ten Challenge, No. 18 Oregon knocked off No. 4 Minnesota in four sets, handing the Golden Gophers their first loss of the season.

Oregon seized control of the first set, pushing its lead to as many as five at 20-15. Minnesota clawed its way back, tying the match at 23 apiece, before the Ducks would claim the final two points and the first set.

In the second set, it was Minnesota that jumped out to an early lead and surged ahead 15-10 halfway through the set. The Ducks battled back and tied it up at 22. The Gophers claimed a 23-22 edge with a kill by Regan Pittman, before three straight kills gave Oregon a two-set lead.

The two teams battled back and forth throughout the third before the Golden Gophers claimed the set on a pair of Oregon errors. The fourth set was nearly identical to the third, but this time Oregon was able to successfully close out Minnesota.

What a night to be a Duck.

In the nightcap, No. 2 Stanford flexed its muscles against the visiting Nittany Lions. The Cardinal kept the Big Ten winless in the challenge, giving Penn State its first loss of the season in the process.

The Nittany Lions came out strong in the opening set, racing out to a 4-1 lead. Penn State maintained its advantage throughout the set until Stanford claimed its first lead at 22-21. After a brief tie at 23 apiece, a successful Cardinal attack and a service ace wrapped up the first set for Stanford.

The second set went was a back and forth affair as neither team led by more than three in during the first half. With the score tied at 17, the Cardinal scored four straight to distance itself from the Nittany Lions and cemented the set with a pair of kills.

In the third, Penn State fell behind 5-1 before it had time to catch its breath, as Stanford came out firing on all cylinders. The Nittany Lions chipped away and drew within one at 14-13. But Stanford responded with a 12-7 run to close out the match.