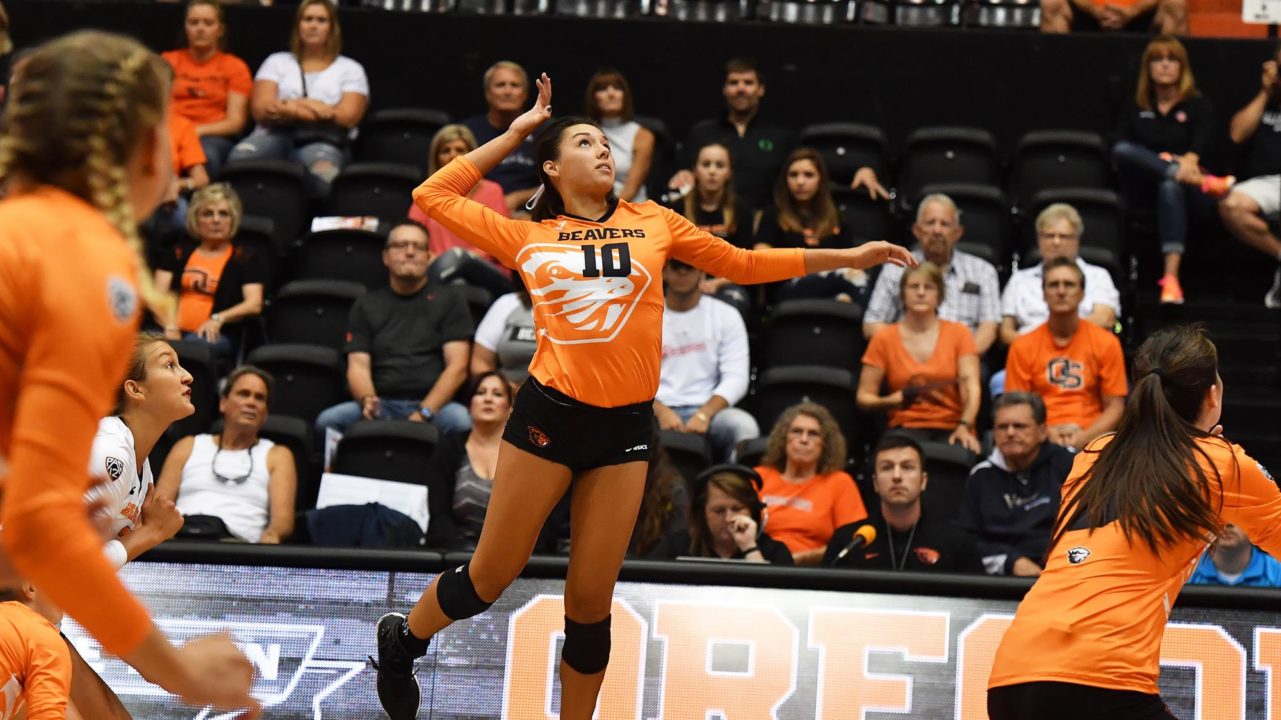 It came down to the final match of the tournament, but Oregon State pulled off a five-set stunner to hand host Iowa State its first loss.

The remainder of the all-tournament team was:

No. 22 Iowa State moved to 2-0 on the season with a 4-set victory over Virginia Saturday morning inside of Hilton Coliseum.

Here are highlights of Iowa State's 3-1 win over Virginia in game two of the Cyclone Challenge! #Cyclones pic.twitter.com/RfsgqR2DAR

The Cyclones used an 8-2 run to take control of the opening set, 25-18, limiting Virginia to a -.030 hitting percentage and just 10 kills. The Cavaliers responded with a comeback, hitting .286 in the second set and edge Iowa State, 26-24.

Iowa State took over in the third, opening the set with a 5-0 run and maintaining control with another stretch of 6-straight points. The Cyclones hit a dominant .511 en route to a decisive 25-12 victory. The teams battled early for control in the fourth set before the Cyclones put the match away, 25-19, with a 9-1 run.

Ole Miss rose to the occasion, edging Oregon State, who is receiving votes in the AVCA Poll, 3-2 inside Hilton Coliseum Saturday.

The Beavers used a 10-5 run to separate themselves from the Rebels and take set one by a narrow margin, 25-23. In the second set, Ole Miss established a 5-point advantage, 20-15, but Oregon State refused to go away and tied the score at 24-all. The Rebels eventually pulled it out, 27-25, with timely kills by sophomore Bayleigh Scott and junior Emily Stroup.

Lots of Rebels to talk about today! @CoachMcRoberts recaps the big win against Oregon State to close out the Iowa State Invitational. #HottyToddy #Mot1vat1on pic.twitter.com/gOOcC3F3dO

Oregon State stunned 22nd-ranked Iowa State, 3-2, on its home court Saturday evening in Ames, Iowa. The Beavers have seen all three of their matches thus far extend to 5 sets.

The opening set was an absolute battle, going down to the wire. Iowa State reached set point, 24-19, but the Beavers turned it around with a 6-point run and notched the 27-25 win. Oregon State used several runs to secure the second set, 25-19 as the Cyclone offense sputtered, hitting .133.

Iowa State broke the tie, notching a tight 26-24 win in another epic battle for the third set. The Cyclones used a kill by freshman Eleanor Holthaus and a block by senior Hannah Bailey and sophomore Avery Rhodes to close it out. Iowa State got off to a hot start with a 4-0 run in the fourth set and never surrendered it, working its way to a 25-18 win to force a fifth set.

The Beavers seized the momentum in the fifth, outscoring their opponents 4-1 before the Beavers could fight back to tie the score. The teams fought back and forth until a kill by sophomore Maddie Goings and attack error allowed Oregon State to claim the final victory, 16-14.

Goings had a stellar performance to lead the Beavers, collecting career-highs with 25 kills and 17 digs for her first double-double of the young season.