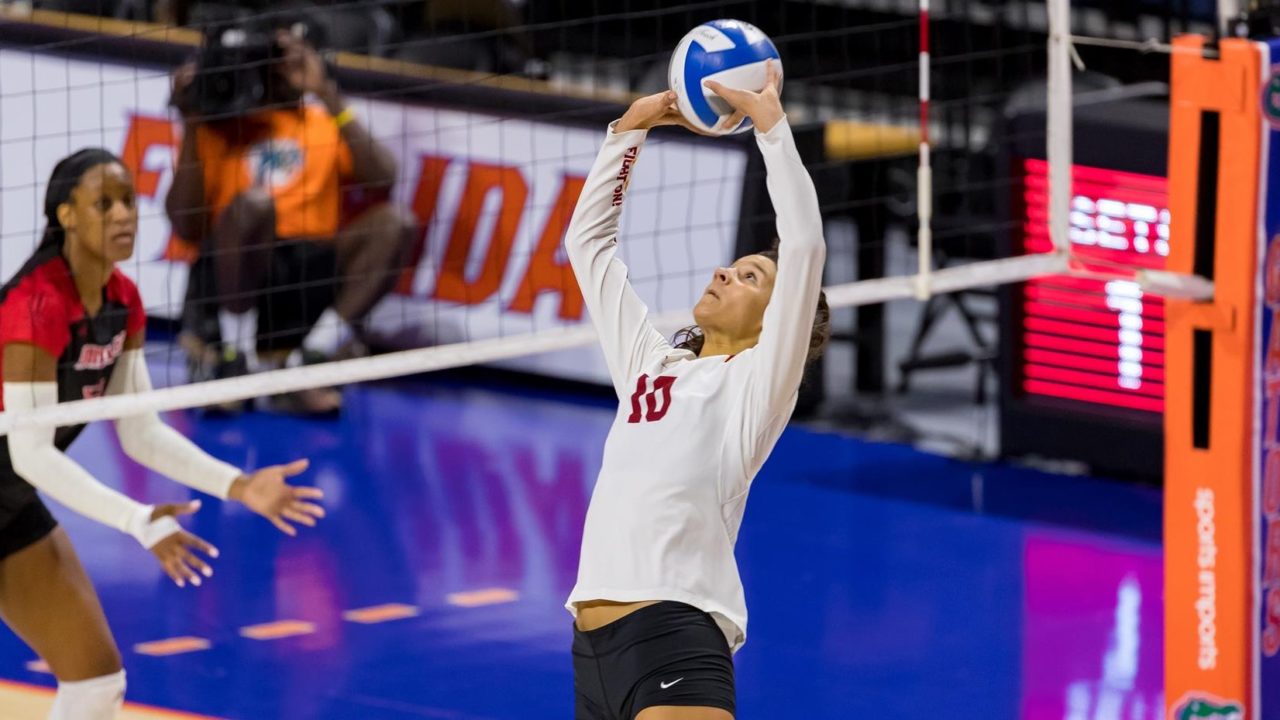 Raquel Lazaro had nearly 60 assists and over 20 digs as she fed the USC pins enough to down (RV) Arizona State on a loaded night for the Pac-12. Archive Photo via Matt Pendleton/USC Athletics

The Ducks earned their third straight victory by winning at Colorado in four sets, with an impressive bookend of first and fourth games.

Next Up: The Buffaloes will stay at home to host a team from the same state in the Beavers of Oregon State. The Ducks meanwhile stay in Mountain Time but travel to Salt Lake City to battle Utah.

In maybe the best match of the night, Arizona State pushed USC to five sets on the road, but couldn’t come out with the victory due to the Trojans’ electric pins.

Arizona State hung around with a defense that had more digs and blocks, even though they were out-hit. Nicole Peterson (29 assists, 23 digs, 4 kills) was the primary floor defender, but three others had double-digit digs with two others at 19. One of those was Ivana Jeremic (15 kills, 19 digs), who was also one of a trio with double-figure kills. The others were Claire Kovensky (17 kills, .333, 6 digs) and Alyse Ford (12 kills, 5 digs).

Next Up: The Trojans host Arizona State’s in-state rival in the 22nd-ranked Arizona Wildcats. Arizona State, on the other hand, have the rest of the weekend off with their next match on Friday the 19th against Utah.

The Bruins found themselves with a sweep of Arizona behind a strong serve and solid defense as they earned a top 25 victory over the Wildcats. It’s also their third consecutive sweep victory.

Next Up: UCLA has the weekend off after playing on Wednesday too and now awaits a road test at #16 Washington. For Arizona, their schedule doesn’t get any easier as they stay in L.A. for a tilt with #12 USC.

Cal continues to be pesky in the Pac-12, even near the bottom of the league, but they couldn’t get past Washington who swept the Bears in the Bay area.

Both offenses were efficient, with Washington hitting .323 and they added nine aces. Kara Bajema (14 kills, .182, 6 digs) was the only Huskies player with over 20 swings, while Avie Niece (13 kills, .667, 4 blocks) and Samantha Dreschel (10 kills, .333) had double-digit kills with efficiency. Ella May Powell (40 assists) was the distributor for the well-oiled machine on offense.

Next Up: It’s now a quick turnaround for Washington, who has to play at #2 Stanford on Saturday night. Cal will stay at home and play Sunday when they get #18 Washington State.

The Cardinal continue to assert their dominance in the Pac-12, as they’ve now won 14 in a row overall and are the only team in the league with less than two losses.

Washington State not only was trumped in aces, but they were much less aggressive. It resulted in less serve errors, but also many more in-system attempts for the Cardinal. The Cougars were also held to a .118 mark despite an outburst from Taylor Mims (12 kills, .476), as everyone else combined for just 20 kills on .025 clip.

Next Up: Stanford plays host a second day in a row with #16 Washington in town. The Cougars will be in the same area, but across the bay as they battle Cal on the road.