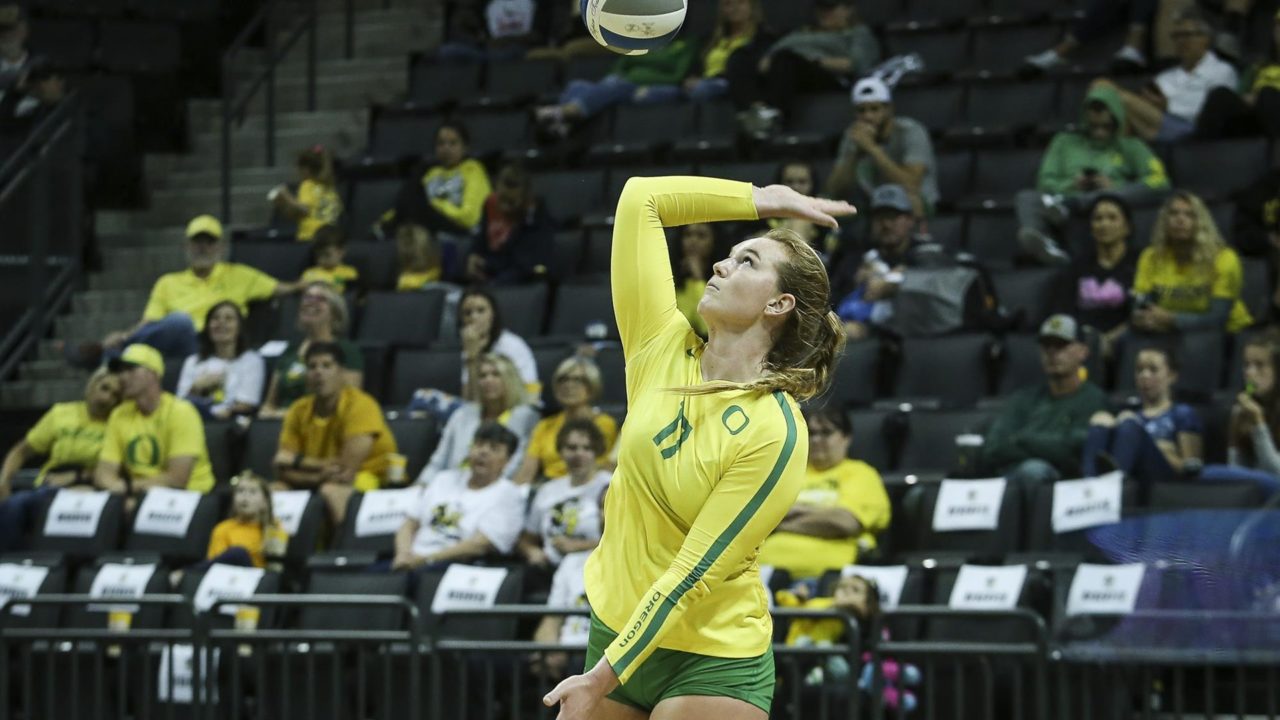 Oregon's Taylor Borup was tabbed as Pac-12 Offensive Player of the Week, while Stanford's Morgan Hentz and Oregon's Brooke Nuneviller were honored as defensive player and rookie of the week. Current Photo via Oregon Athletics

Taylor Borup, JR, ORE (Leesburg, Va.)
3.83 KPS, 4.5 DPS, 4.3 PPS
• Led Oregon to back-to-back 3-0 sweeps of No. 17 UCLA and No. 12 USC on the road, tallying 23 total kills on .311 hitting and 27 digs, recording her first-career double-doubles in her first-ever Pac-12 starts.
• The junior finished with a career-high 16 digs and a season-high 13 kills in the sweep of the Bruins.
• Added 10 kills with no errors registering .313 hitting against the Trojans in 32 total attacks attempts while adding 11 digs for a second-straight double-double.
• Earns her first-career weekly honor and the 38th all-time weekly honor for the Ducks.

Morgan Hentz, JR, STAN (Lakeside Park, Ky.)
5.86 DPS, 8 ASST, 1 SA
• Held down the Stanford defense this week, averaging 5.86 digs per set in a four-set win at No. 24 Utah and a sweep at Colorado.
• Racked up a match-high 26 digs (one shy of her season-high) against the Utes and followed up with 15 digs in a sweep at Colorado.
• Did not record a single reception error in 31 attempts.
• Leads the Pac-12 in digs per set with 5.08 for a Stanford team that has won 12 games in a row and sits atop the Pac-12 standings at 6-0 in Conference play.
• Earns her fifth-career Pac-12 weekly honor, her fourth this season and second-straight. Earns the 111th all-time weekly nod for the Cardinal.

🔙2️⃣🔙 and fourth overall this season for @HentzMorgan!

Brooke Nuneviller, FR, ORE (Chandler, Ariz.)
4.83 DPS, 2 SA, 6 ASST
• Helped Oregon to back-to-back road sweeps of No. 17 UCLA and No. 12 USC, leading the Ducks in digs in both matches.
• Recorded 17 digs and added a pair of aces in a sweep at UCLA to move into second in the Pac-12 with 4.74 digs per set, the only freshman in the top-10 in the Conference in the category.
• Notched her 10th-straight match with double-digit digs and 14th of 16 matches this year.
• Earns her second Pac-12 Freshman of the Week honor and the ninth all-time weekly freshman honor for the Ducks.

The Ducks win two of the three weekly conference awards as @brookeyy_5 claims Pac-12 freshman of the week honors for the second time this season! #GoDucks pic.twitter.com/8uQgOaKnlB