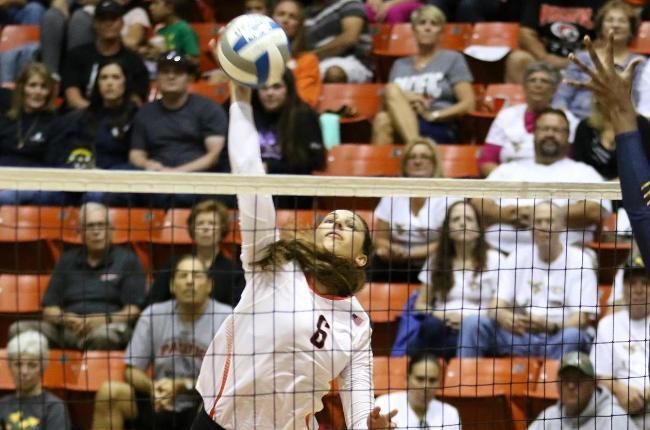 Despite being ahead in the match 2-1, Santa Clara couldn’t hold on, dropping the match and their sixth in a row after starting off the season 9-0)

Pacific was out blocked 14-7 and out hit .201 to .187 but overcame to win in five. Emily Baptista produced a double-double and career-best 20 kills hitting for .333 and 12 digs. Teammate Lexi Elman added 13 kills and 22 digs, making it her 40th career double-double.

Santa Clara led in almost every category, but couldn’t finish at their home opener. Nikki Hess led the way for the Broncos with a match-best 23 kills, while Taylor Laugero picked up 22 digs.

Emily Baptista racked up a career-best 20 kills while hitting .333 for the match and tallying a career-high 12 digs.

Skylar Wine opened the match with a kill as Pacific took a 3-0 lead. But the Broncos answered back with four straight points. Maycie LaBass served up an ace, but Santa Clara led 7-6. Pacific embarked on a 5-0 run, and stretched the lead to 14-7 as Elman posted a pair of kills and Fleming served up an ace. Back to back blocks from the Broncos cut the gap to 15-12, but Elman, Baptista and Fleming stretched Pacific’s lead back out to 21-14 with a kill each. Wine put the finishing touch on the set with a kill for the 25-22 win.

In set two, four early blocks by Santa Clara gave the Broncos a 10-6 lead. Pacific slowly began to crawl back as Baptista racked up four kills, pulling the Tigers within 18-16. But a pair of kills from Nikki Hess put the Broncos in control, and despite a block from Elman and Janie Feldsher, the Broncos took set two, 25-21.  Baptista posted eight kills in the second set, but the Tigers headed into the break tied at 1-1.

Feldsher and Wine posted kills early in set three, but three blocks from Santa Clara put the Broncos in front, 7-5. Lauren Cline chipped in a kill of the bench, but Hess tallied again for an 11-6 SCU margin. An ace from Fleming cut the gap to 13-11, but Hess answered out of a timeout. Gotterba added an ace and Fleming and Baptista added back-to-back kills to bring the Tigers within 19-17.  But the Broncos tallied four straight points to seize control, and finished the set off, 25-20.

Baptista gave the Tigers a 4-3 lead in set four with her 16th kill, Elman and Fleming added kills and a block from Fleming & Baptista stretched Pacific’s lead to 8-3.

Santa Clara rallied back to within 12-10 before a kill from Baptista and ace from Jessica Diederich. The Broncos charged forward, tying the set at 20-20. From there, the Tigers closed on a 5-0 run as Baptista delivered a kill out of the back, and after an ace and two SCU errors.

In set five, the Tigers stormed out to a 4-1 lead on a kill from Baptista. The Tigers’ posted a block and led 8-5 at the set-switch.

The Broncos battled back and with two straight blocks, took a 12-11 lead before Fleming answered on the slide. Elman blasted home a free ball for a 13-12 lead. Hess tied the set at 13-all, and Cline provided match point with a kill from the right pin.

Pacific will return home to face Pepperdine on Thursday (7 p.m.) and Loyola Marymount on Saturday (12 p.m.) in the Alex G. Spanos Center.

Nikki Hess had a match-best 23 kills and Jensen Cunningham added 14 for the Broncos (9-6, 0-3) who were making their first appearance of the season at Leavey Center on the new playing surface.

Emily Baptista (20 kills/12 digs) and Lexi Elman (13 kills/22 digs) each recorded double-doubles for the Tigers (9-6, 3-0) who remained perfect in league play and won for the sixth time in their last seven outings.

Pacific led 10-6 in the fifth set before the Broncos rallied to take a 12-11 lead on an attack error, but the Tigers scored four of the final five points. Lauren Cline’s kill snapped a 13-all tie and Jessica Diederich served an ace on match point.

After the Broncos took a 2-1 lead in sets, the Tigers played a strong fourth game. They erased a 3-1 deficit with seven straight points. The Broncos cut the advantage to 12-10 on a kill by Sabrina Clayton and a Pacific attack error, but the Tigers scored the next five points to take control of the game.

The Broncos, who dropped their sixth-straight match, posted a .201 hitting percentage in the contest, but just .070 in the fourth set and .150 in the fifth.

Callie Jones matched a career high with 47 assists for the Broncos who are back in action Thursday when they travel to Gonzaga to continue WCC play.