No. 11 BYU Rolls Past Pepperdine 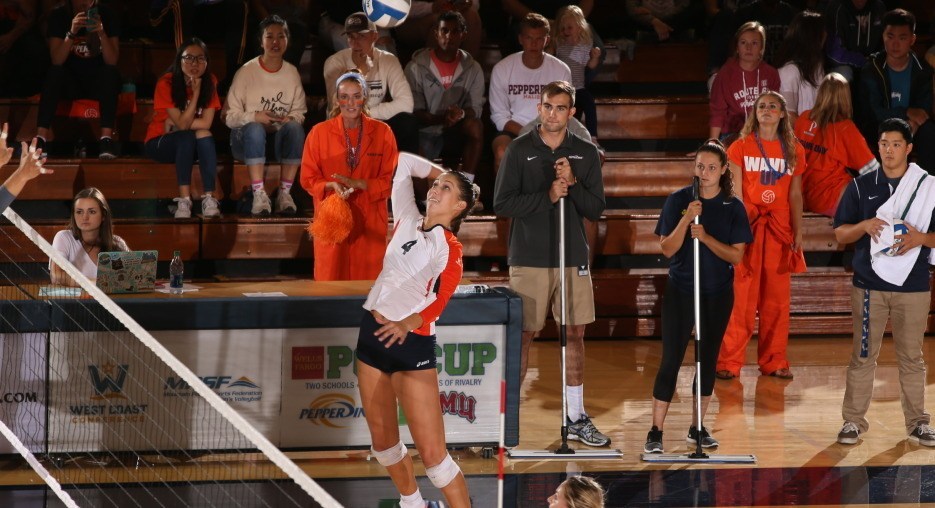 BYU middle blocker Amy Boswell put down 12 kills hitting for .455 and a match-best seven blocks. Hannah Robison picked up a season-best 13 digs. McKenna Miller led the team in kills with 16.

Heidi Dyer recorded her fifth career triple-double with Pepperdine with 14 kills on a .480 hitting percentage, 19 assists and 11 digs. Jasmine Gross led the team with six blocks.

“I’m really happy with the total team effort tonight,” BYU head coach Heather Olmstead said. “Everybody contributed and played well down the stretch for us.”

Boswell led the Cougars with 12 kills while hitting on a .455 clip and adding a match-high seven blocks. Alohi Robins-Hardy set the team with 23 assists while Mary Lake contributed 15 digs. Hannah Robison chipped in a season-high 13 digs and McKenna Miller had 16 kills to lead the team in the win.

BYU (14-1, 3-0 West Coast Conference) got the first point of the first set against Pepperdine (6-8, 0-2 WCC) with an ace from Lake. The Waves, however, rattled off the next five of six points to take a 5-2 advantage. Pepperdine stayed ahead by as many as four at 10-6 before a Miller kill and Whitney Young Howard block kept the Cougars within two, down 10-8. The teams remained close from there until a 4-2 rally from the Waves put them back ahead at 16-12. BYU struggled to retake the lead with Pepperdine up 20-16, but a 3-1 Cougar run brought them back within a pair, down 21-19. The late rally proved too little for BYU as the Waves took the set 25-22 on a kill.

Pepperdine kept its momentum going into the second set, taking a 3-1 lead to start things off. BYU kept in the set, though, down just one at 7-6 after a Boswell kill. A trio of kills and a block from Miller then tied the set at 10-all. The Cougars were down 14-12 before a 5-1 run, capped off by a Danelle Parady-Stetler ace, gave BYU a 17-15 advantage. The Cougars were ahead then by three at 19-16, but the Waves took the next three consecutive points to knot the score back at 19. The teams remained neck-to-neck until BYU took the set on a Howard kill, 25-23.

Pepperdine once again started the third set with a 3-1 advantage, but a pair of aces from Robins-Hardy helped to give the Cougars a 5-3 edge. Four-straight errors from the Waves quickly gave BYU an 11-7 lead. Back-to-back Robison aces put the Cougars up 15-8, forcing Pepperdine to take its final timeout of the set. BYU remained ahead by six points at 19-13 following a cross-court kill from Miller. A ball-handling error from the Waves then ended the set for the Cougars, 25-18.

The fourth set started close with neither team going ahead by two until an unforced Pepperdine error put BYU up 10-8. A Robison and Miller block kept the Cougars ahead 14-13 in the close set. Another BYU block extended its lead at 18-15, and a Boswell ace pushed the lead to four at 22-18. Miller then ended the set and match 25-21 for the Cougars with a kill.

The Cougars stay on the road Friday, Sept. 30, when they face off against No. 6 San Diego at Jenny Craig Pavilion at 7 p.m. PDT. The match will be streamed live on TheW.tv. Links to live stats and the video feed can be found on the BYU women’s volleyball schedule page.

MALIBU, Calif. — The Pepperdine women’s volleyball team put in a big effort against the No. 11 BYU Cougars in Firestone Fieldhouse this Tuesday night, falling just short with a 3-1 loss.  The Waves won the first set 25-22 to set the tone, but the Cougars rallied with 25-23, 25-18 and 25-21 set victories to secure the four-set victory.

Sophomore Heidi Dyer (San Clemente, Calif./Saddleback Valley Christian HS) commanded the Waves’ presence with her fifth career triple-double after putting up a season-high 14 kills on a career-high .480 success rate.  She added 19 assists, 11 digs and two blocks throughout the match.

Jenna Tunnell (Phoenix, Ariz./Desert Vista HS) came in late in the match to change the Waves’ momentum and influence the match. She added a 3-0-6 output for a .500 hitting percentage, while amassing nine assists and five digs in two sets played.
[youtube https://www.youtube.com/watch?v=qDYU-GML7EE]
The Waves, fueled by the energy in Firestone, worked ahead 5-2 with kills from Harris, Wylie and Lyons to start the set.  It was a lead the opposition would be unable to break throughout the match, despite closing the gap to a two-point deficit at both the 10-8 and 21-19 marks.  Back-to-back smashes from Dyer and a final set-point kill from Gross put the Waves up 1-0 on a 25-22 set win to start the night.

The energy stayed high-intensity throughout the second set as well, with the Waves going up 5-3 early after an ace from Gross and commanding blocks from Harris and Wylie.  BYU and Pepperdine went point-for-point after that, with the Cougars evening the set at the 10-10 mark.  The Waves pulled ahead again shortly after, going up by two points on an ace delivered by Wylie, 14-12.  The Cougars were still in the match, however, and overcame the home team’s advantage with a 19-16 lead of the team’s own.  Gross’ second ace and her sixth kill of the night gave Pepperdine a 3-0 lead to tie the set, but BYU would give no let up and after a 22-22 tie, put the set away 25-23 to even the match 1-1.

Strong service aces fueled the Cougars in the beginning of the third set, and with that, BYU worked ahead to a 5-3 lead early.  The Waves went on a 3-1 run to even the set a 6-6, but the opposition would not give Pepperdine another inch and went on a 10-3 run themselves to put a six-point advantage over the home team 16-9.  Despite a few points throughout the set, the Waves were unable to overcome the Cougars and BYU went up 2-1 on the night with a 25-18 set three victory.

The fourth set was just as exciting as the previous three, as BYU and Pepperdine went head-to-head to the 7-7 mark to begin.  The exchanges continued through a 14-14 tie, before the Cougars pulled away slightly to a 19-17 advantage.  Kills from Gross and Lyons helped the Waves’ cause, but BYU’s momentum was too much to stop and the Cougars won the match on a 25-21 final set.

Next, Pepperdine will hit the road for two matches, first challenging Pacific on Thursday in Stockton, Calif. before trekking to Moraga, Calif. to take on Saint Mary’s on Saturday.   Find live stats and stream here: http://gowav.es/2bT5hVh.  Follow the Waves on Facebook and Twitter @WavesVolleyball for immediate updates, recaps and more.