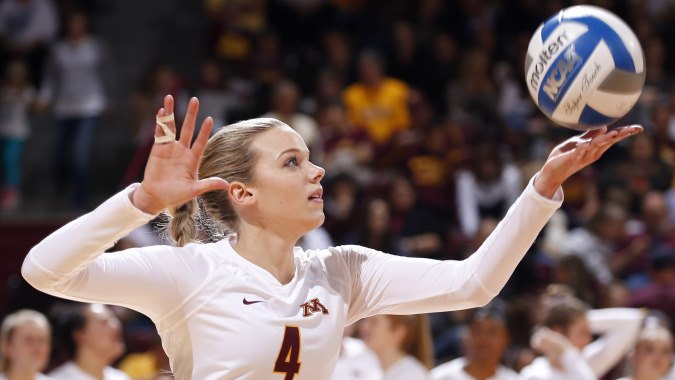 Paige Tapp of the University of Minnesota has been awarded the 2016 Senior CLASS Award in NCAA Division I women’s... Current Photo via Minnesota Athletics

Paige Tapp of the University of Minnesota has been awarded the 2016 Senior CLASS Award in NCAA Division I women’s volleyball.

Tapp is the first Golden Gopher to outright win the Senior CLASS award.

“It is an honor to receive the Senior CLASS Award,” said Tapp. “I have been pushed, tested and empowered to be the best version of myself in all aspects of life.”

On top of the Senior CLASS Award, Tapp has been named a two-time All-American, an All-Big Ten selection as a junior and earned two AVCA All-Region honors in 2015 and 2016.

Tapp ranked second with Minnesota in blocks per set with 1.08. She also helped the Gophers to an active 36-game home court winning streak that started back in 2014.

In the classroom, Tapp was named as a two-time CoSIDA Academic All-America, earning first-team honors this season. Tapp graduated this month with a 3.88 GPA as a marketing major, completing her coursework in just 3.5 years.

This season Tapp was a Big Ten Sportsmanship honoree for Minnesota, having served over 16 hours of community service work with M.A.G.I.C. (Maroon and Gold Impacting the Community) and Athletes in Action Ultimate Training Camp. On top of these organizations, Tapp is was apart of the Student-Athlete Advisory Council and Fellowship of Christian Athletes. Tapp has assisted in fundraising events for Unlimited Dance Marathon and with the Gophers Athletics’ HopeDay Festival.

“We are so proud of Paige and could not be happier with her selection as the 2016 Senior CLASS Award winner,” said head coach Hugh McCutcheon.