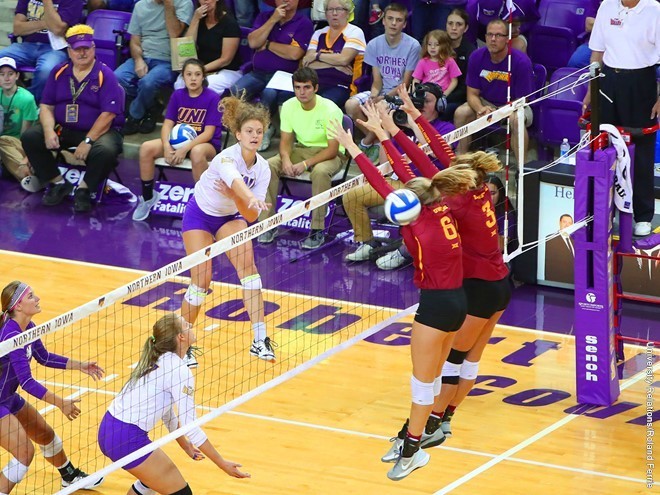 The second set featured the highest scoring single set match for either team at 40-38. During the set, the Panthers held a 7-0 lead and a 21-15 advantage over the Cyclones. What should have been an easy win for the Panthers, turned into a marathon rally that ended in their favor.

The Cyclones posted the second-highest point total in NCAA history (25-point scoring era) with 125 points, two shy of Wichita State’s total of 127 in 2015 against Bowling Green.

The Panthers picked up 120 digs over Iowa State’s 113 digs for the match.

Northern Iowa continues play at home on Sept. 16 against Illinois State in both teams first Missouri Valley Conference opener. The Cyclones head to Milwaukee this weekend for the Marquette Invitational.

Courtesy of the University of Northern Iowa athletics

CEDAR FALLS, Iowa – The University of Northern Iowa volleyball team snared a five-set marathon thriller over intra-state rival Iowa State on Tuesday in the McLeod Center. The Panthers outlasted the Cyclones in a near three-hour match, 27-29, 40-38, 25-23, 17-25, 15-10. UNI improves to 6-4 overall, while Iowa State falls to 6-3 overall.

UNI senior Amie Held recorded the 24th 20-20 match in Panther history with 23 kills and 22 digs. Sophomore libero Kendyl Sorge notched the fourth-highest single-game dig total in school history with 35 digs against the Cyclones. UNI tallied 120 total digs, which ranks as the second-highest single-match total in program history trailing only the 125 digs the Panthers posted against Washington State on Sept. 11, 1987.

In fact, the Cyclones actually won more points in the match (125) than the Panthers (124). The Cyclones recorded the second-highest point total in NCAA history (25-point scoring sets) with 125 points – trailing Wichita State’s total of 127 set Sept. 12, 2014 against Bowling Green.

Iowa State jumped to a 5-0 lead in the opening set, but the Panthers turned it around quickly and took a 10-9 lead. The first set featured 12 ties and four lead changes and set the tone for the entire match. Iowa State needed four set points before finally securing a 29-27 first-set win.

Then came an epic second set that featured the highest scoring game for the Panthers in the 25-point set era. However it probably should not have come to that after UNI opened the set with a 7-0 lead and a 21-15 advantage. UNI eventually pulled out a 40-38 second-set win that saw a total of 16 set points combined. Iowa State failed on all six of its set points and UNI prevailed on its 10th set point. The second set had 15 ties and eight lead changes.

UNI scored the first three points of the fifth set and never trailed. Iowa State tied at 3-3 but the Panthers then ran off three in a row to push the lead to 6-3. Iowa State closed to within 10-9, but UNI closed the deal by scoring six of the final seven points for the 15-10 triumph.

UNI will be back in action Friday at 5 p.m. in the McLeod Center against Illinois State in the Missouri Valley Conference opener for both squads.

The Iowa State effort was led by Jess Schaben, who posted a season-high 22 kills and a career-best 22 digs in the first 20-20 match by a Cyclone in six years. Ciara Capezio also had a double-double at 15 kills and 20 digs. Abby Phillips and Hali Hillegas also had career-best days digging the ball with 21 and 18, respectively.

Iowa State was rocking out of the gates, with Ciara Capezio the star attraction. The senior fired a kill to get ISU on the board first, and then went behind the service line to make it 5-0 Cyclones, a run which included a pair of service aces. However, the home side wasted little time getting back into things as UNI went on a 7-2 run to tie things up at 7-7. UNI eventually got some breathing room, opening up a three-point edge at 16-13. The Cyclones, using their plethora of depth options, fought back ahead at 19-18 when Karlie Taylor’s shot went long. The drama went to bonus volleyball, as ISU missed the first two chances to take the set, UNI then missed their first shot and ISU couldn’t convert a third set point. The Cyclones finally got it on the fourth try after a strong serve from Suzanne Horner led to UNI pushing the free ball out of play and giving ISU the first 27-27.

After getting off to the best possible start in the first, the Cyclones were on the wrong side of the run to begin the second as the Panthers racked up the first seven points of the second. The UNI lead advanced to 13-5, but ISU was able to scrap its way back into contention. The lineup shuffling continued, with Genesis Miranda making a strong cameo and Monique Harris coming in to set back-row with Horner up front, but ISU was eventually able to bring the Panther lead down to three at 17-14. ISU had one last charge in them, going on a 7-2 run which included fighting off two set points to make it 24-24. The score made it to 38-38, with a combined 17 set points (10 for UNI, seven for ISU) not being converted. On the 18th set point between the two teams, UNI finally got the breakthrough as Heather Hook’s serve saw Abby Phillips return it into the antenna and give the Panthers the second set, 40-38.

There was no hangover for the Cyclones in set three, as ISU’s continued rotation got fresh Cyclones on the court and into the action. Iowa State found Schaben early and often to help build and 8-3 lead. The Panthers crawled back into the set and eventually cut the ISU advantage down to two at 17-15. ISU was able to get its lead back to four at 19-15, but that lead was soon gone at 20-19 after a 5-0 Panther run. Another marathon battle looked to be on the horizon, but the Panthers were able to get the requisite points to close the set in a regulation 25 points. Amie Held got a kill to bring up set point at 24-23, and got another kill on the next point via a blocking error on Grace Lazard to take the set 25-23 and the lead 2-1.

All Iowa State to Force a Fifth Set

Once again it was the Cyclones who were better out of the break, as the Cyclone offense once again was able to click early and get an 8-5 lead. However, the Panthers stormed back with a 6-0 run to get ahead 11-8, powered by a trio of Kayla Haneline aces. The Cyclones countered with a 7-0 run of their own, getting the advantage back and up to 15-11. The Panthers were never able to recover, as the ISU block then stepped in to shut down the home team for the set. Iowa State posted 4.0 total blocks on the set. Miranda forced a fifth set as her 10th kill of the set gave ISU the frame 25-17.

UNI Pulls Away Late to Take Fifth and Match

The Panthers came flying out for the fifth set as UNI racked up the first three points of the first-to-15 race. ISU quickly countered with a 3-0 run to tie, but the Panthers had another 3-0 run to make it 6-3 UNI. At the switch it was 8-4 Panthers, but ISU was able to cut it down to one point at 9-8. However, that would be the closest Iowa State got the rest of the way as UNI ran off the final four points of the match, including back-to-back blocks to close the fifth 15-10 and the match in five sets.

*The 40-38 second set in favor of UNI was the longest set of volleyball in Iowa State history in terms of combined points. The previous record was 39-37 ISU at Kansas State in 2004.

*Iowa State finished with 113 digs, the first time the Cyclones have had over 110 digs in a match since the 2010 NCAA Volleyball Championship match against Creighton (116).

*Abby Phillips had a career-high 21 digs, her first career 20-dig match. Her previous best was 18 last Saturday against Montana.

*Ciara Capezio had multiple service aces in a match for the third time in 2016. It was the 27th time in the senior’s career she has had at least two aces in a match.

*Capezio posted 15 kills and 20 digs, her 25th career double-double. It is also the first double-double by a Cyclone in 2016. Her 20 digs tied a career-high, also done last year against Appalachian State

*Genesis Miranda posted 13 kills, her second match as a Cyclone in double figures, and her most kills in a match during her time in Ames.

*Jess Schaben recorded a season-high 22 kills, her second match over 20 kills this season and third of her career.

*Schaben also had a career-high 22 digs, giving her a first-career double-double. Her previous career high for digs was 10 at K-State last season.

*Schaben posted the first 20-20 match by a Cyclone since Victoria Henson in the 2010 NCAA Volleyball Championship against Creighton (26 kills, 21 digs).

Iowa State heads to Milwaukee for the weekend to take part in the Marquette Invitational. The Cyclones will play the host Golden Eagles on Friday at 7 p.m. ISU will close out the weekend against Missouri State on Saturday morning at 11 a.m.