Penina Snuka To Be Inducted into Arizona Ring of Honor 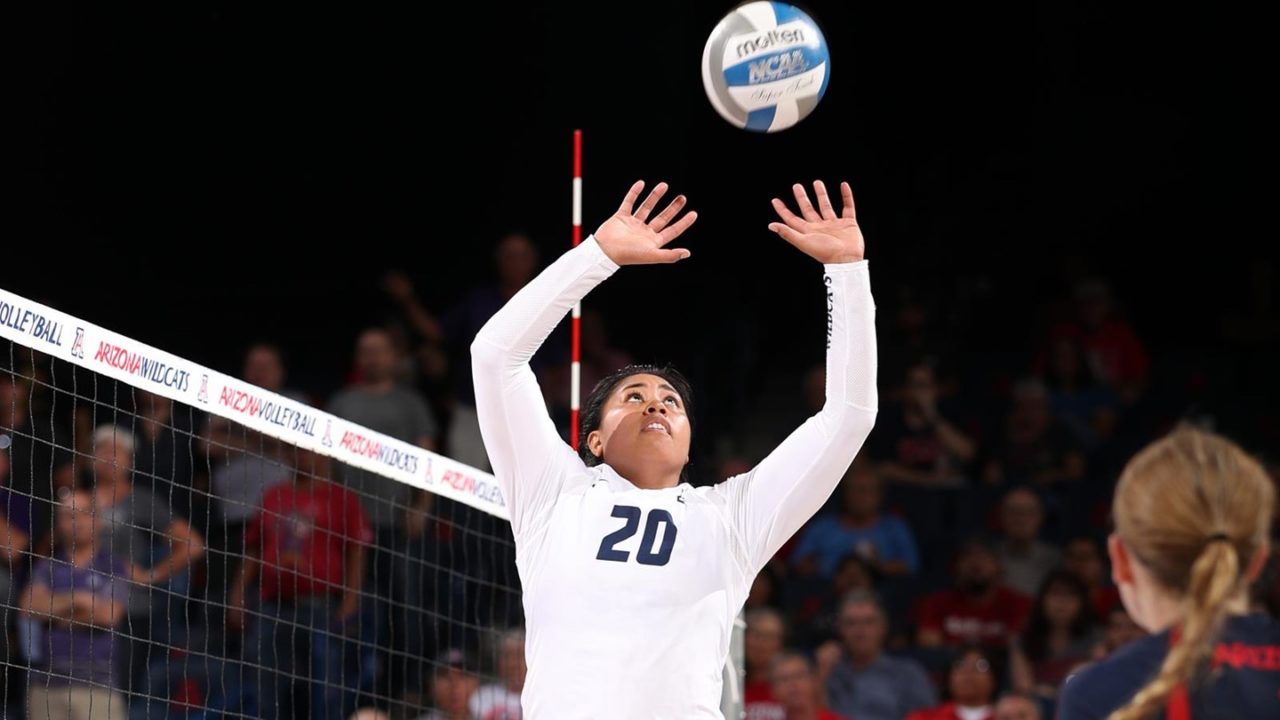 Penina Snuka will be inducted into the Arizona Volleyball Ring of Honor, where her name will hang in elite company in McKale Center, where she had one of the most successful careers in Arizona volleyball history. Current Photo via Stan Liu/Arizona Athletics

The odds have always been against Penina Snuka. How could a 5-6 setter, four or five inches shorter than the average Pac-12 setter, with almost no high school or club training at the position succeed against the best collegiate athletes that the sport had to offer in the Pac-12?

Four years later, Snuka silenced the doubters with one of the best careers in Arizona volleyball history, leading the Wildcats to 83 victories in her career, the winningest senior class since 2003, and finishing second in Arizona history in both assists (5,212) and digs (1,610). As a senior in 2016, she punctuated her All-American career by becoming the first Wildcat in school history to be named Pac-12 Setter of the Year and leading the Wildcats to their first Sweet 16 appearance since 2005.

How did she get there?

“She never missed a rep, or a drill in practice,” said head coach Dave Rubio. “She took every rep in practice her entire career. I’ve never seen anything like it in my career. She never took a single drill off. In 27 years, she and Laura Larson, who was also a senior in 2016, are the only two players I’ve ever seen never take off a match, a set, a practice or even a drill.”

Snuka played in 489 sets in her career, more than any other player in Arizona history, including all 133 sets in UA’s 20-win 2016 season.

“Penina was one of those kids that could defy her limitations through her competitiveness, her will to win, her leadership and her athleticism,” said Rubio. “All of that outweighed her height limitations at the net.”

Snuka’s effort, competitiveness, fire and drive were on display every match which made an electric viewing experience for fans of the Wildcats and the sport. Snuka remains the only setter in Pac-12 history to total over 5,000 assists (5,212) and 1,600 digs (1,610).

On Friday, Penina Snuka will be inducted into the Arizona Volleyball Ring of Honor, where her name will hang in elite company in McKale Center, where she had one of the most successful careers in Arizona volleyball history.

“It makes me certainly very proud,” said Rubio. “From her humble beginnings as a freshman, when she had to take on the responsibility of a freshman setter who had really had no setter training and wasn’t really a setter in high school or club. She took that team her freshman year to the postseason and then every year after that. This is well deserved. She’s as good of a setter as we’ve ever had here.”

ArizonaWildcats.com checked in with Snuka prior to her big day on Friday.

Q: What are you up to now-a-days? How’s post-Arizona volleyball life treating you?
A: Life has been better than good. I had some time within this year to be home and spend time with family, which I had not been able to do since I started playing volleyball in the sixth grade. I did a lot of traveling with my mom and attend a lot of family events.

Q: After the volleyball career ends, what’s next for Penina Snuka?
A: I love volleyball so my career in volleyball will never end. There will come a time where I won’t be playing but I always be involved in it somehow. As far as what is next, who knows I could be back in the gym next to the ‘Legend Dave Rubio’.

Q: When you look back at your time at Arizona, what do you miss the most?
A: I think just being around McKale and the other athletes as well as my team. Feeling the love and support that you can get while being in Tucson and going to school here.

Q: What was your favorite memory from your career as a Wildcat?
A: Easy. My teammates. Every great memory I have while attending school here has had to do with them. Our time in the gym, workouts, traveling and being in the locker room made the greatest impression on me. Words could not express the love I have for them and the gratitude I have for being able to have been their teammate.

Q: You were around the team quite a bit in the preseason, is it nice to return to Tucson and hang out with your old coaching staff and some of your old teammates?
A: Its always a great time returning back to Tucson. I love Dave (Rubio), Gregg (Whitis) and Rita (Stubbs). It is without a doubt that I was meant to come here to Arizona and be coached  by all three of them.
The team is as crazy and as great as ever. I love those girls. You would have a hard time trying to convince me anyone other team on campus was cooler than them. I know Arizona will continue to do great things because of them. Even the ones I didn’t get a chance to play with, I consider them my teammates, we suffered through double days together so that counts for something in my book.