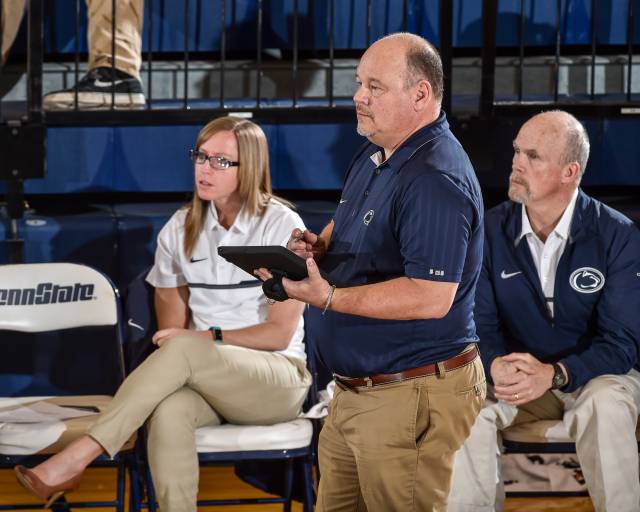 The Penn State men’s volleyball team has announced their 2017-2018 season schedule. This year’s slate will include an early trip... Current

The Penn State men’s volleyball team has announced their 2017-2018 season schedule. This year’s slate will include an early trip to Los Angeles for the Pac 12/Big Ten Challenge, where they’ll play UCLA and USC (even though neither the Big Ten nor the Pac 12 sponsor men’s volleyball as a sport). That will give Penn State a preview of the Pauley Pavilion, which is the host of the 2017 NCAA Men’s Volleyball Championship Tournament.

That’s one of just two trips out of the eastern time zone for Penn State this season. The other will be an early March trip to the Outrigger Invitational, where they’ll play BYU, Hawaii, and Lewis University. While the easiest path to the NCAA tournament for Penn State is to win their conference, the EIVA, they’ll otherwise build an impressive resume that should they stumble through an always-competitive conference schedule, there are enough non-conference wins to be had to build a strong at-large case.

Case-in-point: Penn state, who made the NCAA tournament last year and lost in the opening round to Hawaii, will play 3 of the 5 other NCAA tournament teams from last season in 2018: Ohio State, Hawaii and BYU. They also play Lewis University, last year’s MIVA runners-up.

The team’s schedule will have a new wrinkle this year, as the Nittany Lions will have a full 12-day stretch without games from March 18th-30th. Head coach Mark Pavlik says that this was a conscious decision.

“One thing we’ve found over the course of the last couple of years is that we can’t just keep asking them to keep pounding away. I think there’s a break that serves us very well, so we’re going to take that and then hit the last 3 weeks of the EIVA season.”

Penn State returns most of their roster from last season, having lost only two players to graduation. One of those is the team’s second-leading scorer from 2017 Chris Nugent, who averaged 3.18 kills/set and 3.65 points/set; and middle blocker Matt Callaway who had 108 total blocks and hit .406 out of the Nittany Lions’ central offense last year.. They do return leading scorer Calvin Mende at the opposite, as well as their top defensive blocker Kevin Gear (119 last season) for their 2018 run. Mende spent the summer as part of the 2017 Men’s Junior National Training Team.