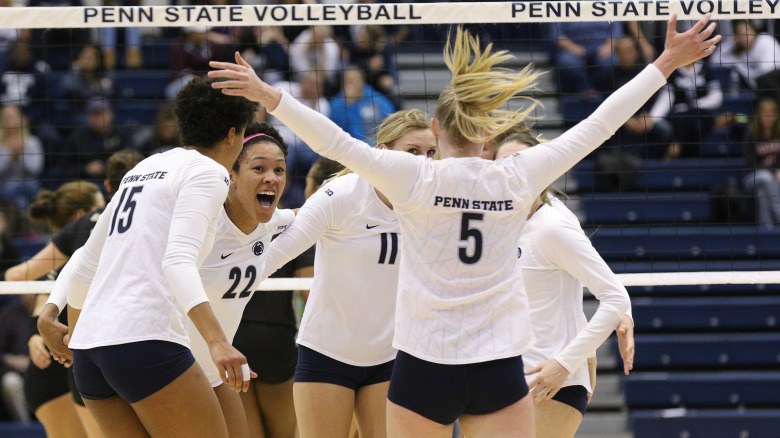 Late last season, Penn State head coach Russ Rose decided to make a change, switching the Nittany Lions from a 5-1 to a 6-2 offense.

The 6-2 offense allows for two setters to be on the floor at the same time, meaning one setter is always in the back row, giving the team six attackers at all times as opposed to only five in a traditional 5-1.

Rose opted for the change in large part due to the experience of his veteran setters, redshirt junior Bryanna Weiskircher and senior Abby Detering, knowing the benefit of having both on the floor at the same time. Weiskircher and Detering are both offensive threats as hitters as well, with the 6-2 allowing Rose to have both in the lineup as much as possible without constantly having to substitute in and out.

“I didn’t think we were playing at the highest level that we needed to play (at the end of last season),” Rose said. “Usually, (the change) is personnel driven and both players have experience setting the 5-1 and if we get in a bind rotationally, I’m comfortable with either one of them.”

The challenges of facing a 6-2 for opposing teams can of course be noted in last year’s NCAA Tournament match against Nebraska. The Cornhuskers were the top overall seed headed into the regional semifinals, but Penn State’s 6-2 offense presented challenges in the first two sets, helping the Nittany Lions to a 2-0 lead at the break before Nebraska battled back for the 3-2 win.

There are obstacles to overcome in any new offense with adjustments to positioning and flow difficult at times. For Detering though, growing up a hitter all the way through high school, the changes have come much more naturally than they might have to someone who’s only developed as a setter.

“Hitting comes naturally to me, since I have done it in the past,” Detering said. “The hardest thing at the beginning was realizing I was a hitter and not a setter because there would be times where someone would dig the ball and I would want to go in to set. The more we play, the better it’s gotten, especially this last weekend.”

Even with a successful trial last year, Penn State wasn’t sure it would make the change to a 6-2 offense until preseason, not wanting to commit until all personnel settled in and the coaching staff was able to see how each rotation fit.

“One practice, (Rose) just kind of threw it out there,” Detering said. “Our team actually played really well together, so we went with it in the first tournament and it’s been going well ever since. There’s still areas to improve on, but it’s really neat to see how awesome our team can be. We’ve been playing so well, but we can get so much better with this lineup too.”

Positioning is one of the main reasons for the change as well, having Detering on the right side as a hitter as much as possible while still keeping her on the floor for her setting abilities. For Rose, it simply allows he and the staff multiple players on the floor who can set at a high level without compromising the team’s strength up front.

“At the beginning we had a couple of people we wanted to look at playing the right side position,” Rose said. “I thought Abby was a good candidate to be one of those people in addition to letting her set. Her personality is very aggressive and she plays hard.”

Rose has experimented in the 6-2 in the past whenever he felt it fit his team or he needed a change in strategy, but this year is the longest any of his trials have lasted, something he certainly likes.

“I would say we’re still experimenting with what I think our optimal line would be but they(Detering and Weiskircher) are both good setters and they know what’s going on,” Rose said. “Sometimes you lose when you’re experimenting, but sometimes you can experiment and still win. I want to win.”

“There’s advantages to both, but I think the awesome thing about the 6-2 is how different it is,” Detering said. “With Bryanna and I both being setters, it’s pretty neat when I’m in the front row that if she does dig the first ball, it’s still a setter who can set the ball.”

While we’ll have to wait to see how long the experiment lasts, if anything is for sure, it’s that Penn State’s 18th 7-0 start under Rose might just mean things are operating according to plan.