Pittsburgh’s Steady Offense Lead To Upset Of No. 8 North Carolina 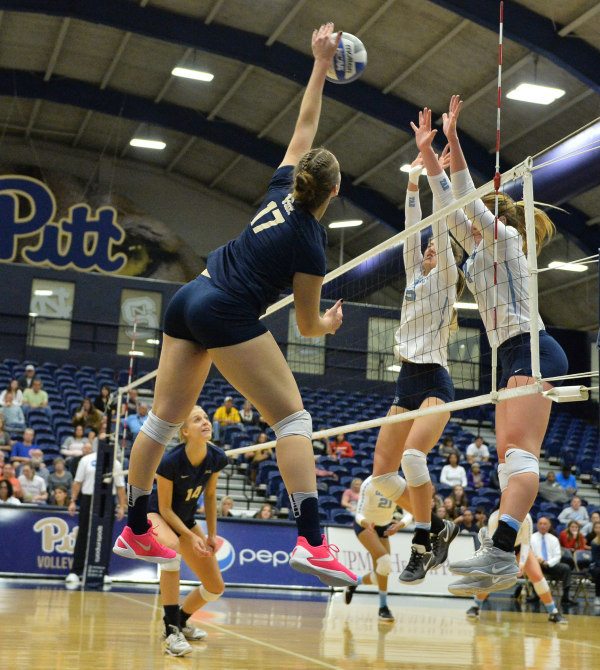 With the win over North Carolina, this victory marks the third time Pittsburgh has defeated a top-25 team (No. 25 Colorado State, No. 22 Michigan) but first against a top ten team.

For the Tar Heels, Taylor Leath led the way with 17 kills, while Taylor Borup ended with 13 kills and nine digs. Sheila Doyle picked up a match-best 22 digs.

PITTSBURGH – The University of Pittsburgh volleyball team upset No. 8 North Carolina, handing the Tar Heels their first conference loss of the season, Sunday afternoon at the Fitzgerald Field House.
Pitt (17-7, 8-4 ACC) opened with a 25-21 win over UNC (19-3, 11-1 ACC) but fell in the second set 25-19. The Panthers took a 2-1 lead following a 25-15 third set victory but the Tar Heels fought to tie the match 2-2 after a fourth set 25-23 win. A dominating fifth set by Pitt led to victory as the Panthers outscored North Carolina 15-6.
The victory marks the third win this season for the Panthers over a top 25 team (No. 25 Colorado State, No. 22 Michigan) and first against a team in the top 10.
“This win is huge for us,” said head coach Dan Fisher. “We needed another top 25 win and we got one. It was a strange game emotionally but we were good when it mattered.”
As a team, Pitt boasted higher offensive and defensive numbers than nationally ranked North Carolina. The Panthers recorded more kills (69/46), assists (62/43), aces (6/5) and digs (62/50). Pitt also finished with a greater hitting percentage (.272/.176).
Nika Markovic, who was back at full strength after an injury earlier this month, was the Panthers’ top hitter, posting a career-high 19 kills and a .268 hitting percentage. The freshman standout also recorded her first double-double of the season as she tallied 10 digs.
“We didn’t make any excuses today,” said Fisher. “You can see what we have been missing in Nika [Markovic] the last month and it is great to have her back at full strength.”
Two other Pitt players finished with double-digit kills in junior Mariah Bell and redshirt freshman Stephanie Williams. Both also completed double-doubles as Bell posted 18 kills and 10 digs, while Williams tallied 14 kills and 11 digs. Bell also had five blocks.
Controlling the pace of the Panthers’ offense of sophomore setter Kamalani Akeo, who tallied 49 assists.
Defensively, redshirt sophomore Angela Seman led Pitt with 18 digs, while for the second straight game redshirt senior Jenna Potts controlled the block with eight total.
Set One: Pitt 25, North Carolina 21
Pitt and North Carolina battled in the opening frame and despite the Tar Heels leading for most of the set, the Panthers came back to defeat UNC 25-21.
Pitt trailed the Tar Heels 11-6 early on but a four point run by the Panthers brought them within a point, 11-10.
UNC extended its lead to 15-12 at the media break and led by four just points later prompting a Pitt timeout. The Panthers found a rhythm following the break, putting together three consecutive points to trail by one 17-16.
The Tar Heels maintained a slight lead until three straight points by Potts, including two kills and a solo block, tied the game at 20 and then gave Pitt a 22-20 lead.
A struggling UNC called a timeout to try and stop the Panthers but the Tar Heels were unsuccessful as they committed three straight errors to hand Pitt the win.
Set Two: Pitt 19, North Carolina 25
North Carolina came out alive in the second frame, tallying the first four points to begin the set. The Tar Heels remained out in front, forcing Pitt to use both of its timeouts within four points of each other as UNC got out to a 10-3 lead.
Out of the Panthers second break, Pitt outscored the Tar Heels 10-4 to move within one, 14-13. While Pitt remained within close distance of North Carolina, the Tar Heels always stayed at least one point ahead.
UNC separated itself from the Panthers in the final points and went on to win 25-19 and tie the match at one set apiece.
Set Three: Pitt 25, North Carolina 15
Following the break, Pitt returned to the court trailing 6-2, but fought from behind to take an 8-6 lead. The Panthers scored six straight points, five of which were kills. Bell and Markovic each added two apiece.
North Carolina took its first timeout and returned to tie the match 8-8, but Pitt never relinquished the lead. The Tar Heels came within a point of the Panthers 12-11, but Pitt outscored UNC 7-1 to earn a 19-12 advantage and force the Tar Heels into using its second timeout.
The Panthers extended their lead to 22-14 following back-to-back Williams’ aces and went on to defeat UNC 25-15 and take a 2-1 lead in the match.

Pitt and North Carolina battled in the fourth set, exchanging back-and-forth points with neither team taking a lead greater than two points between tie scores.
The two teams were knotted throughout the set, but the Panthers took a 15-14 lead at the media timeout.
The Tar Heels worked its way out in front 20-17 late in the set, forcing almost back-to-back timeout calls by Fisher. Out of the second break, Pitt came back to tie 21-21, but was unable to hold off UNC who tied the match 2-2 after a fourth set 25-23 victory.

The Panthers demolished the Tar Heels in the final set, holding No. 8 UNC to just six points.
Pitt and North Carolina were tied early on 4-4, but three straight kills for Pitt, one by Williams and back-to-back by Bell, gave Pitt a 7-4 lead.
The Panthers did not let up as they scored six straight points to lead 13-5 and were just two points away from the win. During that run, Bell put up three kills and Markovic had two.
Pitt solidified the win just moments later thanks to a service ace by Akeo.

Pitt continues ACC action in Georgia as the Panthers take on Clemson and Georgia Tech. The Panthers will visit the Tigers Nov. 4 and then face the Yellow Jackets Nov. 6.

The Tar Heel blocking unit was in tip top shape on Sunday afternoon, as Carolina put up a total of 16.5 blocks in the match, its fourth 15-block performance of the season. Junior Taylor Fricano led the Tar Heels with a career-high 10 stuffs in the match, the third double-digit outing for a Tar Heel this year. Senior Taylor Treacy tied her career high with seven blocks, while Taylor Borup also matched her personal best with five.

Sophomore Taylor Leath led UNC’s offense with 17 kills in the match, while Borup tallied 13 and was just shy of a double-double with a career-high nine digs. Libero Sheila Doyle recorded a match-leading 22 digs in the match, her 17th career 20-dig outing. Senior Abigail Curry dished out 29 assists and six digs, while freshman Mariah Evans put up 10 assists.

The Tar Heels dominated the serve and pass game early, leading 5-1 in aces after the first two sets including two by Borup, but Pittsburgh turned the tables after intermission, out-serving UNC 4-0 over the final three sets.

Carolina’s offensive efficiency improved, however, as the match went along, including hitting .393 in the fourth set after running a measly .045 clip over the first two sets. Nevertheless, it was all Pittsburgh in the deciding fifth frame, as the Panthers hit .611 with no unforced errors to knock off the eighth-ranked Tar Heels.

Carolina controlled the majority of the first set, racing ahead 11-6 to open the match. However, after the Tar Heels led 20-17, three kills by Jenna Potts and four Carolina errors allowed the Panthers to come roaring back, winning eight of the final nine points of the frame and taking the opener, 25-21.

The Tar Heels exploded for a 12-4 lead to open the second set, but once again, the Panthers came charging back, as a seven-point run midway through the set pulled Pitt within one, 14-13. Borup struck a kill to keep UP from tying the score, then teamed up with Fricano for a block to help UNC push back in front, 17-13. Carolina held firm to its lead this time as back-to-back blocks from Beth Nordhorn off the bench helped secure the frame for UNC, 25-19.

An early Pittsburgh run flipped a 6-2 deficit to an 8-6 lead to open the third. A block by Borup and Fricano pulled UNC within one, 12-11, but Pitt won seven of the next eight points to make it 19-12 and a service error sealed the deal for Pittsburgh, 25-15.

The fourth set was a nail-biter, featuring 16 ties and six lead changes. After trailing, 17-16, Leath scored four straight points for the Tar Heels with two kills and two blocks to give Carolina a 20-17 advantage, but back-to-back kills by Stephanie Williams tied the score at 21. However, Williams followed by making two attack errors and serving a ball out of bounds to get UNC to set point, and Borup crushed one to end it, 25-23, and force a fifth set.

The fifth set began in a 4-4 tie, but the rest of the set was all Panthers, as Pittsburgh sprinted ahead 13-5 on a service run by Angela Seman and a service ace by setter Kamalani Akeo closed out the match for Pittsburgh, 15-6.