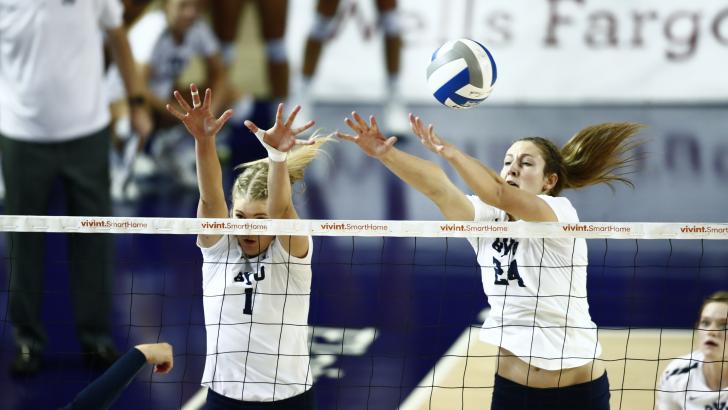 #8 BYU downed #25 San Diego on the road behind a stellar block and more. Check out the post-match breakdown: Archive Photo via BYU Photo/BYU Athletics

*Note: This is a follow-up that started with the pre-match Scouting Report that you can read about here.

In a meeting of the two top teams in the West Coast Conference, it was #8 BYU coming away with the victory over #25 San Diego. The win will have big implications on the conference title race, so how did it all go down?

Early on it was apparent that two of our pre-match scouting report keys were coming into play: the balanced offense of San Diego that when in system produced fast kills vs. the BYU front-row defense that can dominate the net. Both had their highlights throughout the match as each team used their strengths to their advantages with BYU winning the match.

When the passes were good off serve reception or on defense, the Toreros were unpredictable and well-balanced. With the amount of legit offensive options, that became a problem for BYU early when San Diego evened the match 1-1 in sets. However, the BYU block stayed tough and the combination of aggressive serving and a strong offense made things more difficult for the San Diego defense and reception which therefore led to worse passing and even more from the block.

HOW DID BYU DO IT?

This one was probably an easy guess from just above as well as the stat sheet as BYU posted 12 blocks to San Diego’s four. The Cougars were already leading the conference at 2.92 blocks per set coming into the day, as they slightly raised their average with the performance. It was a balanced effort too as Kennedy Redding led the way with seven blocks and was followed by the trio of Veronica Jones-Perry, Cosy Burnett and Taylen Ballard who all had four blocks.

Not only did the block net BYU a big swing in points and momentum, but it possibly even got in the heads of their opposition as San Diego posted 26 attack errors in the match. Although a lot of that came from the BYU block, plenty of others came from the Toreros trying to hard to hit around it or not make a mistake.

The pin players for BYU are seemingly a constant, as mentioned in the pregame scouting report. That was true again with McKenna Miller (14 kills) and Jones-Perry (13 kills) leading the offense, but what added to their depth on offense and opened things up even more for the pins was the strong play of the middles. The combination of Burnett and Redding (who also plays right side) gave BYU 15 kills on 27 swings with two errors (.481). Most of that came from Burnett (11 kills, .688), but the point still stands that BYU got all they needed from their middles after it was a strength vs. San Diego last year. It’s kind of a ‘chicken and the egg’ argument as to whether the pins opened up the middle or vice versa, but regardless, having options in the middle gave BYU more versatility and less predictability.

This win puts BYU at a huge advantage, as San Diego was their biggest threat to West Coast Conference supremacy. Now, the Toreros are behind the eight ball and would likely need to win in Provo to counteract this loss. For BYU, they showed how strong their block can be as when they are having a good serving day they can beat anyone in the country with the combination of the front row on offense and defense.