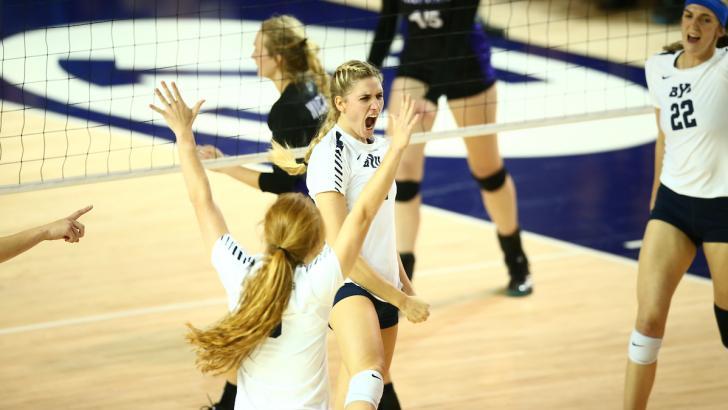 No. 8 BYU outlasted No. 25 San Diego in a close four-set affair on Saturday, using a balanced and efficient hitting effort and strong block in the win. Archive Photo via BYU Athletics

SAN DIEGO – No. 8 BYU outlasted No. 25 San Diego in a close four-set affair on Saturday, using a balanced and efficient hitting effort and strong block in the win.

Set 1 featured 14 ties and six lead changes with neither side gaining more than a two-point advantage throughout. San Diego led 6-4 early, then BYU gained a 9-7 advantage with two Torero miscues and a stuff by Redding. USD went up 14-12 on a Kaity Edwards kill. The Cougars regained the lead at 23-21 with a kill and a block by Miller. A Miller putaway gave BYU a shot at the set at 24-22 and another capped the 25-23 win.

Set 2 included 12 ties and five lead changes. BYU snapped an 8-all tie with a 3-0 run, incluidng a kill and an ace by Burnett. The teams tied at 12, sparking a string of six knotups, last at 17. A Wiblin putaway gave the Toreros a 20-18 advantage. After ties at 20 and 21, USD scored four of the next six for the win. Four different players accounted for kills in the final stretch.

The teams played to a 6-all tie in Set 3, before the Cougars surged ahead by four at 12-8. San Diego was within two at 15-13 with help from a BYU miscue. A 4-1 run with two Miller putaways pushed the margin to five at 20-15. Picha chipped in two kills to bring the Toreros within three at 21-18. Putaways by Haddock and Burnett and an ace by Jones-Perry put BYU on the hill at 24-19. Another Haddock kill sealed the 25-20 win.

The teams split the first 18 points of Set 4, including five ties, last at 9-all. The Cougars took a three-point lead at 14-11 with kills by Miller, Ballard and Haddock. USD was within one at 15-14 afterkills by Fuller and Wiblin. BYU upped the margin two four at 18-14 forcing a San Diego timeout. A pair of Jones-Perry kills pushed the lead to six at 22-16, then two Torero miscues gave BYU a match-point try at 24-17. A Burnett kill two points later closed out the 25-18 win and the match. The Cougars hit at a .469 clip in the final stanza.

San Diego used a 4-1 run to take a 6-4 lead in the first set against BYU. The Cougars countered with a 5-1 run, which included three-straight Torero attack errors, to go up 9-7. The set remained close as a 5-1 San Diego rally pulled it ahead 14-12. A Ballard and Burnett block evened the score at 19-all, and a kill and block from Miller gave BYU a 23-21 lead. Another pair of Miller kills then gave the Cougars the close set 25-23.

BYU took a 3-0 lead early in the second set after a block and kill from Redding. The Toreros scored the next five points to take a 5-3 advantage, but a Moser ace capped off a 4-1 Cougar run to put her team back up 7-6. A Haddock kill pulled BYU ahead by three, 12-9, but a 5-1 San Diego run ensued to put it up 14-13. The Toreros inched ahead at 19-17, but back-to-back Redding blocks tied the set at 21 apiece. San Diego scored the next two points, however, eventually winning the set 25-23 on a kill.

The Cougars were up 4-2 to start the third set, but the Toreros scored the next three points to take a 5-4 edge. Several attack errors pushed BYU up by four, 11-7, forcing a San Diego timeout. The teams traded points until a reversed call brought the Toreros back within two, down 15-13. A pair of kills from Miller and one from Ballard then extended the Cougar lead to five at 19-14. A Burnett kill gave BYU set point, and a Haddock kill ended the set 25-20.

Jones-Perry got the first two points of the fourth set on kills. San Diego then scored five of seven points to go up 6-5. A pair of Ballard kills helped the Cougars retake the lead at 12-10, and a Miller kill made it 18-14. BYU closed out the set on a 6-2 run, winning the match 25-18 on a Burnett kill.

The Cougars stay on the road next, traveling to Saint Mary’s Thursday, Oct. 5, at 7 p.m. PDT. The match will be streamed live on TheW.tv. Links to the video stream and live stats can be found on the BYU women’s volleyball schedule page.

The first set was back-and-forth, featuring 11 ties. After BYU took a 23-21 lead, Coach Petrie took a timeout. Lauren Fuller would pull the Toreros within one with a kill, prompting the Cougars to take a timeout. Showing the importance of the match, each coach would call one more timeout in the waning moments of the first set before BYU eventually took the set 25-23.

The second set was just as close and also ended 25-23, except this time the Toreros got the win. Their .286 hitting percentage in the set was their best of the day. The third set was tied 6-6, but then BYU went on a 6-2 run and never surrendered the lead again. The Cougars hit .469 as a team in the fourth and final set on their way to a 25-18 win.

These two schools, the only ranked teams in the WCC, play again October 27th at BYU.