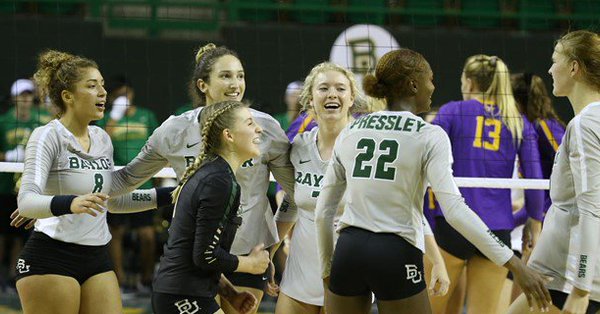 Baylor showing they can contend with Texas in the Big 12 was one of several takeaways from week three. Archive Photo via Baylor Athletics/Volleyball

Three weeks down and even more chaos occurred this past week. We also got some more results to continue and develop ideas of what each team is and will grow to become. Here’s the post-week three notebook.

We talked about this last week a bit that their might not be a clear-cut number one team. Maybe BYU and Stanford can hold things down at the top, but teams who could make the Final Four – or Elite Eight or Sweet 16 or earn a top 10 seed – is WIDE open.

We had chaos in week two and even more in week three with #3, #4 and #5 all losing on the same day. USC (then #5) lost again and #7 Florida was upended by Northern Arizona. There were other upsets as well as the list goes on and on.

NCAA Division I women’s volleyball has slowly progressed to having a bit more parity as the years have gone on, but I can’t recall a season like this to start – it’s still really early and maybe a handful of teams establish dominance at the top. I don’t want to get too ahead of myself because its September and I want to enjoy the regular season, but the NCAA Tournament might feel more like the basketball edition with upsets than what we’ve seen in years past, and I’m perfectly okay with that and all of this parity.

That said, still all aboard the BYU hype train

The Cougars have shown nothing to say they aren’t the top team in the country right now. While others are suffering upset losses, they are unbeaten. They’ve also taken out Stanford and USC, as well as a road test at Marquette.

So they’re battle tested early and beyond a steady force in McKenna Miller among others, Roni Jones-Perry might be the current leader for National Player of the Year. They’re working back Taylen Ballard into the lineup now too to provide more physicality and have one of the best liberos in the game in Mary Lake.

The rest of the way features a lot of matches against unranked teams for the Cougars too, so if they get through this week – that includes a meeting with #25 Utah – and into WCC action, there could start to be talk about if this team could go undefeated. That’s a lot of pressure, but it’s possible. At the very least with what they’ve shown, if they can finish with one or two losses, they’ll have a great chance at a top four seed.

The Bears showed they can beat anyone at the top of the rankings, as they did against #3 Wisconsin. They also showed they are prone to a let down in falling to UTRGV in five sets. That’s important in that they proved they have what it takes to down Texas – a team that lost to Wisconsin – but the goal for Baylor isn’t to just beat the Longhorns, but win the conference. To do the latter, you also have to take care of business with the other teams, which is why you can’t have a let down like they did.

They know they have an absolute start though on the pin in Yossiana Pressley, who emerged last season and was fantastic this past week. In total she had 76 kills in three matches, including 32 against Wisconsin. She’s taken over the role left by All-American Katie Staiger.

One key as the season goes on will be to develop and trust other options so Pressley’s arm doesn’t fall off. In notching those numbers – on good efficiency – she took 183 swings. They can’t afford for her to get tired and fall off as the season wares on, especially since she has already taken more than half the swings this year that she had all of last year.

A bit more under the radar, but if you want to see a five-set match do I have the team for you

Staying in the Big 12 we move on to a team that’s been in Baylor’s shoes – attempting to knock off Texas at the top. Kansas was obviously able to accomplish there goal, but they land on this week’s notebook for another reason: being a five-set match magnet.

The Jayhawks have a young core with some more experienced players who are filling into bigger roles in 2018 after the departure of so many high-level players following 2017. They have a relatively tough non-conference and are off to a 4-4 start with a seemingly bright future ahead. But that record could easily be different – going either way.

So far they’ve played in five matches that have gone to the fifth set – FIVE. That’s more than half! If that extrapolated out for their 28 match schedule, they’d be on pace to appear in 17-18 five-setters. I’m not sure what the record is, but I can’t imagine that’s far off. So if you’re wanting to watch some volleyball that will probably be high-pressure and go down to the wire, I suggest watching Kansas.