Back to Back: Cincinnati’s Jordan Thompson Tabbed AAC Player of the Wk 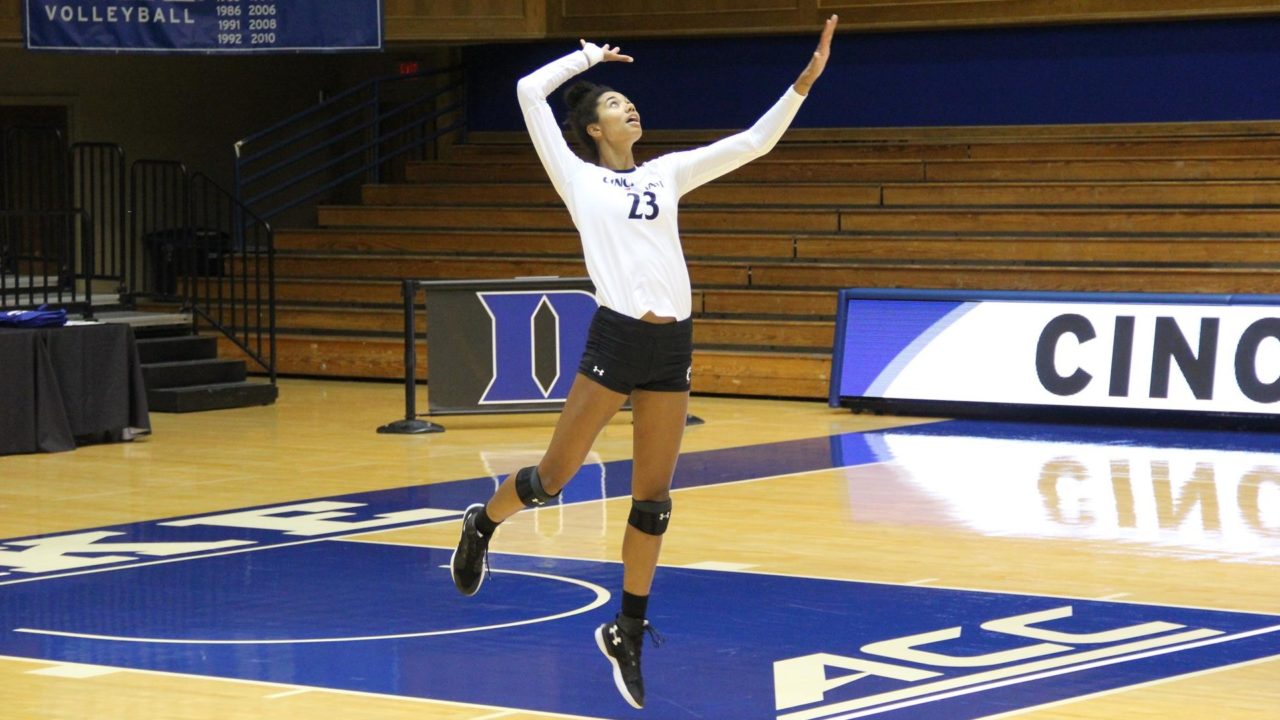 The American Athletic Conference has announced the winners of the league’s weekly volleyball honors for the week ending on September 9 with Cincinnati's Jordan Thompson repeating as Player of the Week. Current Photo via Cincinnati Athletics

PROVIDENCE, R.I. – The American Athletic Conference has announced the winners of the league’s weekly volleyball honors for the week ending on September 9.

Thompson picks up her second-straight and sixth career conference weekly honor after another explosive weekend. She averaged a conference-high 5.46 kills per set, while hitting .274 with a double-double, as the Bearcats faced three opponents at the Duke Invitational. Thompson reached the 30-kill mark for the third time in two weeks, recording 31 while hitting .300 in a 3-2 win over East Tennessee State. She had double-digit kills in each match. Thompson added four service aces and four blocks, while averaging 2.00 digs per set, earning a spot on the All-Tournament team.

Congrats to Jordan Thompson on being named the back-to-back @American_VBall Offensive Player of the Week!#Bearcats | #momentum pic.twitter.com/FTFkibrkJr

Brown was named MVP of the Blackbird Invitational after leading USF to a 3-0 mark and its best start to a season since 1996 with an 8-1 record. She posted a league-high 20 blocks, averaging 1.82 per set. Brown started the weekend with five stuffs in a four-set win over George Washington, before recording a career-high seven against 2017 NEC champion LIU Brooklyn on Friday. She had seven more blocks in a 3-0 win over Holy Cross. Brown also contributed to the offense, averaging 2.82 kills per set with a .300 hitting percentage.

Melville continues to shine in her rookie campaign, as she was named MVP of the UCF Challenge, following a 3-0 start to the Knights’ home slate. She averaged 3.70 kills and 3.80 digs per set, while hitting .275. Melville had 20 digs in a sweep over Florida International and a double-double of 16 kills and 13 digs, while hitting .256 in a 3-1 win over UIC. She knocked down 17 kills and hit .483 against Wofford in UCF’s tournament finale.

Flowers continued a stand-out year, garnering Most Outstanding Player honors at the Tiger Invitational. She helped her team to a 3-0 weekend with 46 kills, eight aces, 26 digs and 11 blocks, averaging 3.75 kills and 2.17 digs per set with a .333 hitting percentage. Flowers recorded her third double-double of the year, along with five service aces in a 3-2 win over Louisiana Monroe on Friday. She scored 17 kills and hit .419 in a 3-1 win over Tennessee Tech and had 10 kills and three service aces, while hitting .333 in a 3-0 win against North Alabama.

Stowell paced USF’s offense to hitting over .230 through three matches, as the Bulls enjoyed a perfect weekend. She averaged 10.45 assists and 2.82 digs per set with two double-doubles, earning All-Tournament honors at the Blackbird Invitational. Stowell recorded 39 assists and 12 digs against George Washington and 44 assists, eight kills and nine digs against LIU Brooklyn. She had 32 assists and 10 digs against Holy Cross.

McHugh was named the Rutgers Invitational MVP, finishing the weekend with 58 digs and eight service aces against Rutgers, Navy and Howard. She averaged 5.27 digs per set and had 15 assists, while recording one service error on 48 attempts for a .979 reception percentage.

Thorson led Tulsa’s attack through a 3-0 weekend at the Golden Hurricane’s home tournament. She registered 55 kills and 4.58 kills per set with a .244 hitting percentage. She added five service aces and 2.17 digs per set on the way to earning a spot on the All-Tournament team. Thorson had 27 kills and 11 digs against Abilene Christian to start the weekend with a double-double. She reached double-figure kills in all three matches.