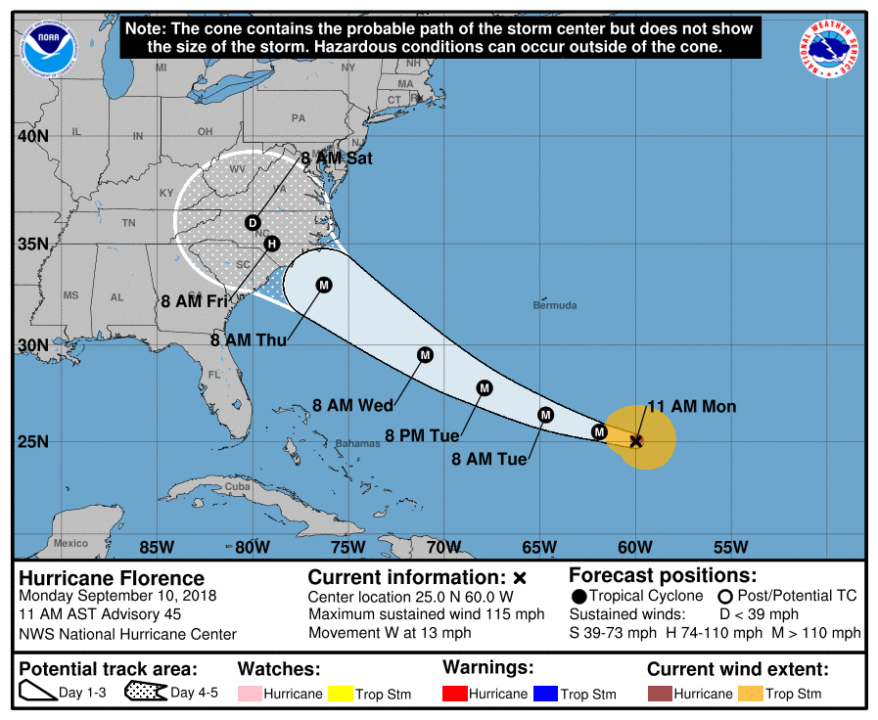 Hurricane Florence is expected to make landfall somewhere in the Carolinas, with Wilmington currently center-target on its path. Current Photo via National Hurricane Center

As the 2018 hurricane season hits its climatological peak on Monday, with 3 active hurricanes in the northern Atlantic and heading toward North American (plus Tropical Storm Paul chugging west in the Pacific. Hurricane Florence is the latest storm to cause cancellations of NCAA volleyball tournaments, as UNC Wilmington announced the cancellation of the Hampton Inn Seahawk Volleyball Invitational that was scheduled from Thursday through Saturday.

UNCW, who is 7-3 so far this season, beat George Mason, Virginia, and Youngstown State in Charlottesville last weekend.  After losing all 3 matches opening weekend (to Illinois, Northern Colorado, and Colorado State), the Seahawks are on a 7-game winning streak. The team was only 4-6 through 10 games last season, and only had 11 wins all year long.

This weekend, they  were scheduled to welcome in South Carolina State, Western Carolina, Charleston Southern, and Providence; instead, they’ll fast forward to CAA conference play on September 21st, opening against William & Mary, who have finished last in the conference in each of the last 2 seasons.

Florence is currently a category 3 hurricane and is expected to make landfall sometime on Thursday afternoon. Wilmington is currently dead-center on the path of the storm, and UNCW has issued a voluntary evacuation of students to safer locations ahead of landfall. Other NCAA Division I universities in the path of Florence that are scheduled to host tournaments this weekend include Coastal Carolina (College of Charleston, TCU, #9 Pitt), and UNC (NDSU, Duke).

Coastal Carolina is holding normal classes on Monday but has cancelled classes on Tuesday,and has not yet made an announcement about athletics.

UNC is scheduled to host North Dakota State and Duke this weekend, and while Chapel Hill is about 150 miles inland, Florence could still be a hurricane, and is expected to still be a strong storm, by the time it gets to the area.