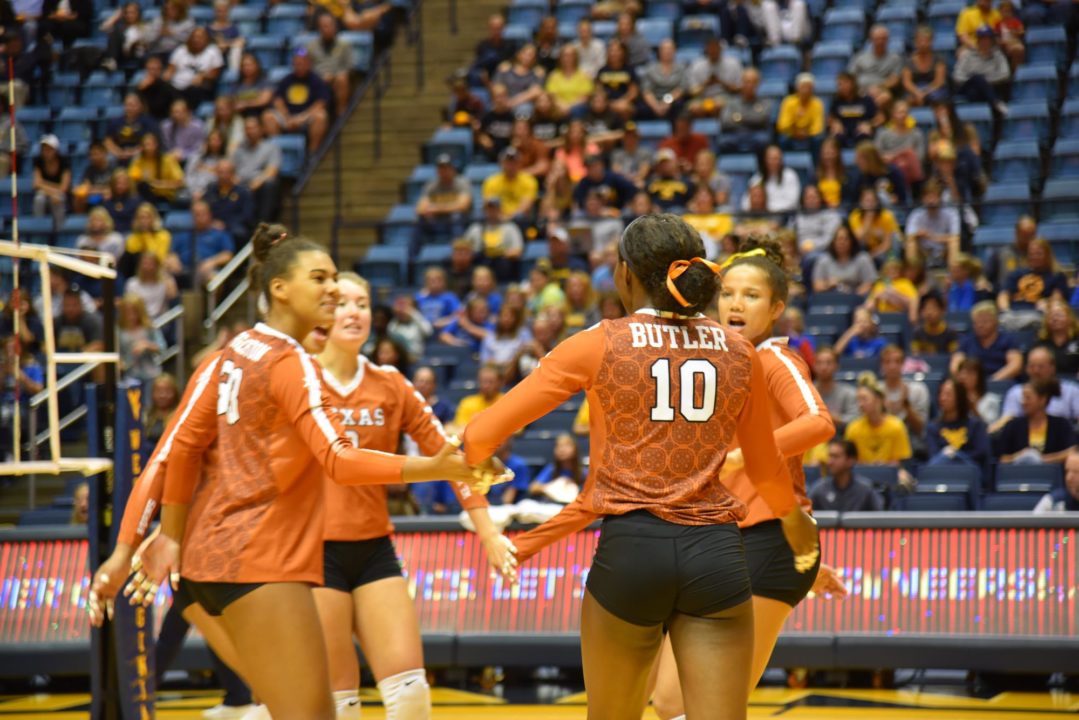 Texas is off to as good of a start as they could ask in their race to win another Big 12 title. Archive Photo via Texas Athletics

The sixth week of the season is over and we’ve got a second week of results from most conferences. We’re starting to get an even more clear picture both nationally and in those leagues, with some takeaways from two of the ‘Big’ conferences.

Who is the the third best team in the Big 12… and maybe even second?

Per usual, Texas has established themselves as the top team in the Big 12. They’re ranked sixth in the country overall and are 3-0 in the league. They also swept Baylor, their perceived top contender, last week to further the idea that they could run away with this thing.

So who can even come close in second? And who can grab a top three spot next to that runner-up?

The only other teams without a loss so far in conference play are Texas Tech (3-0) and Kansas (2-0). Both of those teams look solid enough to potentially make the NCAA Tournament if things keep rolling, but do either of those have enough to challenge Texas for the conference? Probably not.

Baylor, Iowa State and Kansas State have all been ranked at some point, but the Wildcats are off to an 0-4 Big 12 start. The Cyclones have all kinds of injuries and are 1-2 and Baylor has already collected two Big 12 losses.

This kind of looks like a season where two or three teams could tie for second or third in the league and all be around 11-5. And if that happens, Texas could easily go 15-1 or 16-0 and win the league running away. But those other spots behind the Longhorns are still important because the Big 12 will be looking to push several other teams into the NCAA Tournament.

We’re starting to figure out the Big Ten, but we should really know after this week

We saw Minnesota and Penn State in week one. This past week had clashes of Nebraska-Illinois and Minnesota-Wisconsin among others. That gives us some evidence as to why certain teams could compete for the league title and why it might be tougher for others.

That continues this week, with #4 Minnesota traveling to Lincoln to take on #4 Nebraska. At this point both are 4-0 – while Wisconsin, Illinois and Penn State all have at least one loss. It’s a big chance for the Huskers as they try to defend their Big Ten crown, while the Golden Gophers could really garner a step up on the competition with a road win at Nebraska.

So the lineup of teams is starting to come together, and the winner of that will be the favorite following the week. Still though, teams like Wisconsin and Illinois aren’t out of this race yet by any means. Sure enough, both play this week with the winner maybe staying in that upper echelon of those contenders and the loser suffering another setback.

Truly every week is a test in the Big Ten. Ranked opponents come at you like waves in an ocean. But the first two weeks have built up to an even larger statement week that will take place ahead.