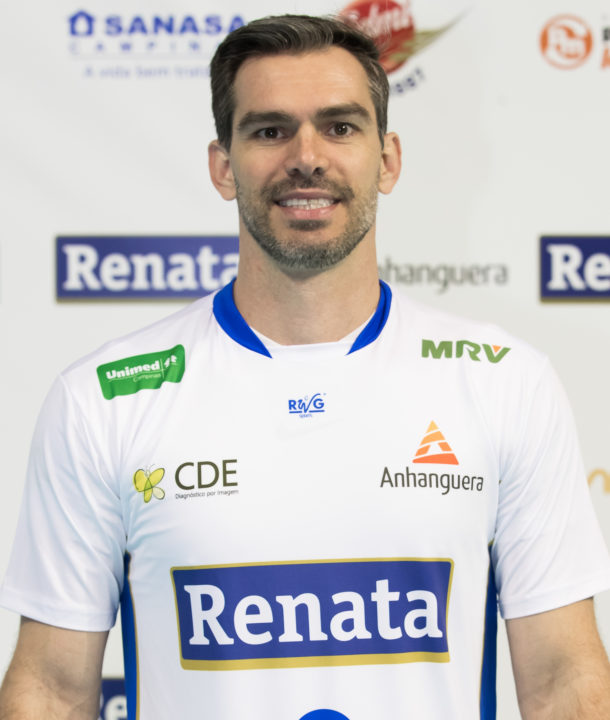 Volleyball setters are known for their longevity in the sport. The physical demands of the position are nowhere near than that of an outside hitter for example, whose knees have to jump up and down throughout the whole game, and whose shoulders carry the load of the team’s offensive attacks. Legendary setter Hélia Souza, perhaps one of the best to ever play the game, for example, played in Brazil at a high level until she was 44 years old, winning the Superliga in her last season as a player.

The latest example of this is Vôlei Renata/Campinas‘ setter Rodrigo Leme, or as is common in Brazil, “Rodriguinho” (little Rodrigo). He recently started his 21st Superliga season, at 37 years of age. What makes this fact even more special is that Superliga as a whole has only been around for 22 seasons, which means Rodrigo was absent in only one of them, during his time spent with Pineto in Italy. It’s safe to say then that Rodrigo’s personal history as a player is intimately linked with the history of Superliga itself, since his debut at only 17 years of age, until today.

As a player, he is entering his fourth season for his hometown Campinas, after a successful runner-up campaign with Montes Claros, when he won the “Best Superliga Setter” award. He has enjoyed similar success with Campinas, making Superliga’s Final Four twice in his first three seasons with the club. This season, they are currently ranked eighth in VolleyMob’s Men’s Superliga Power Rankings. Their hopes of another Final Four run rests on their captain’s experienced shoulders, who even after all this time, continues to be one of the premier players of the game.

For comparison’s sake, here are the records for most seasons played in USA’s four biggest sports leagues: