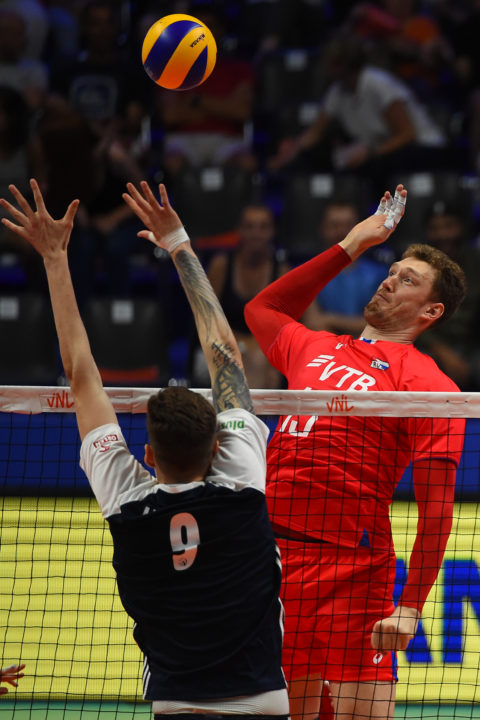 Dmitriy Muserskiy, above, has been a leading figure for Russia in the Nations League, landing over 66% of his shots. Current Photo via FIVB

While Russia is still wrapping up play at the 2018 FIVB Men’s Volleyball Nations League in Lille, France, where they’ll play Brazil in a semi-final on Saturday afternoon, they’ve already announced their preliminary roster of 29 players for the World Championships that will be held from September 9th-30th in Italy in Bulgaria.

The team will be given a “small rest” after the conclusion of the Nations League before reporting to camp on July 20th. The majority of the 14-man final roster is likely already known by coaches, perhaps shifted by injuries or form a little, with only a few spots up-for-grabs. The expanded 29-player roster, however, gives coaches a fuller camp and more bodies with which to train, plus is a developmental opportunity for players who might be called to teams later in their careers.

One peculiar omission from the roster is 29-year old outside hitter Sergey Savin. Savin didn’t play in the Nations League tournament, but the 6’7″ Lokomotiv Novosibirsk player was on the 21-man roster, but was still not selected for this expanded 29-man roster. He’s one of the few holdovers from Russia’s 14-man roster at the 2014 World Championships who are still competing for the National Team.

The rest of the roster has few surprises, led by middle blocker Dmitriy Muserskiy, who led the team in scoring in the preliminary round of the Nations League, led all players in the tournament in hitting percentage at 66.67% (11 points better than the next-closest player), and also ranked in the top 6 in blocks-per-set (.50).