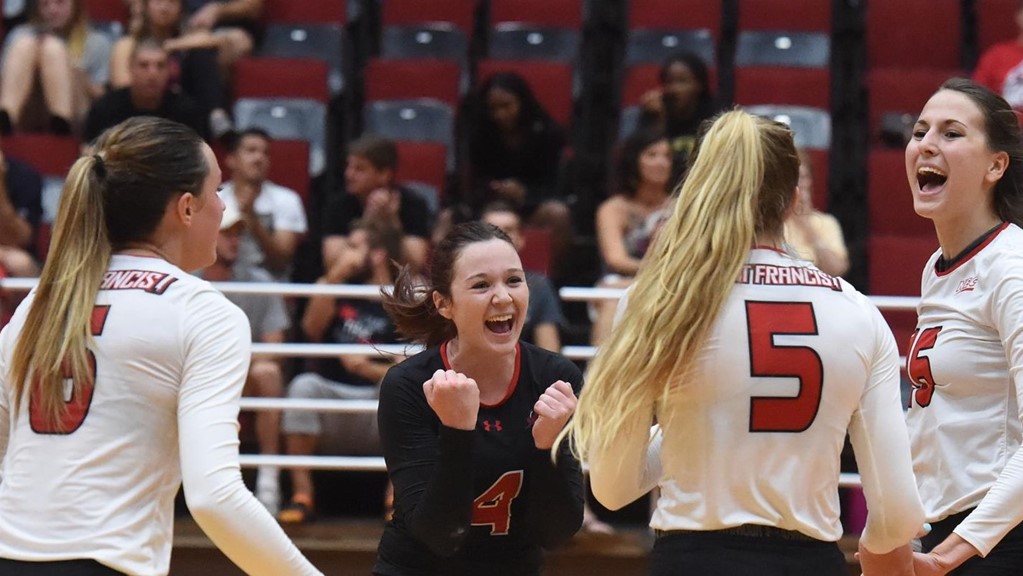 Saint Francis hits the road for the first time in conference play this weekend, traveling to the Big Apple to take on St. Francis Brooklyn and LIU Brooklyn on Friday and Saturday afternoon. Current Photo via Saint Francis Athletics

Saint Francis hits the road for the first time in conference play this weekend, traveling to the Big Apple to take on St. Francis Brooklyn and LIU Brooklyn on Friday and Saturday afternoon.

ABOUT THE RED FLASH
Saint Francis comes into the weekend at 8-8 overall and 2-1 in Northeast Conference play after a weekend home sweep of Fairleigh Dickinson and Sacred Heart. The Red Flash are paced by Kelsey Roush (Johnstown, Pa./Richland), who had 20 kills against the Knights and 28 last weekend en route to NEC Player of the Week honors. She has upped her kills per set total to 4.1 in NEC play, second in Conference. Defensively, the Esposito sisters have manned the middle block as each are averaging over 1.2 blocks per set. Jenna Veres (Independence, Ohio/Padua Franciscan) had 51 digs last weekend, averaging over eight digs per set as she took home NEC Defensive Player of the Week honors. She is averaging 8.5 digs per set, nearly four digs clear of anyone else in the NEC through three matches.

ABOUT THE TERRIERS
The Terriers come into Friday’s match at 6-12 overall and 0-3 in NEC play. Aleksandra Gligoric leads the team in kills, with nearly four per set on the season. She has upped her play to 4.4 kills per set in NEC play, a mark that leads the conference. Defensively, Angie Speweik leads the team with 3.7 digs per set, the freshman’s mark is top-10 in the NEC. Outside of Gligoric, Ally Speweik is second on the team in kills with 2.5 kills per set and a stout .310 hitting percentage. The Red Flash have owned the Battle of St. Francis historically, owning a 33-6 edge. However, the Terriers have won the last three meetings.

ABOUT THE BLACKBIRDS
LIU comes into the weekend at 9-7 overall and 2-1 in NEC play. The Blackbirds are the defending NEC tournament champions. They sport a balanced offensive attack that features four players averaging over two kills per set, led by Viktoria Fink who averages just over three per set overall and an even four per set in NEC play. Natalia Rivera paces the defense, as the libero is second in the NEC behind Jenna Veres (Independence, Ohio/Padua Franciscan) at over five digs per set. In a similar fashion to their offense, the Blackbirds’ block is spread out evenly with three players totaling at least 30 blocks on the season. Katharina Kepper leads the team with an even one block per set. In NEC play, the Blackbirds are limiting opponents to just a .147 hitting percentage. The Blackbirds have owned the all-time series, owning a 27-10 all-time edge including 26-straight matches. The last SFU victory came back in 2000.

FOLLOW ALONG
Both games will be streamed on NEC Front Row, with both matches starting at 4 p.m. Links are at the top of the story and the volleyball schedule page.

LOOKING AHEAD
The Red Flash remain on the road next weekend, heading to CCSU and Bryant next weekend. Saint Francis returns home the weekend of October 20th to host these same Brooklyn schools.