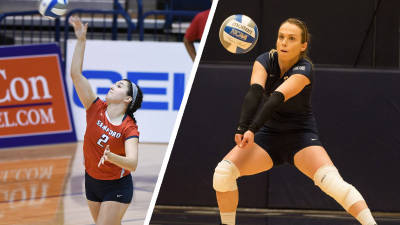 Samford’s Taylor Anderton and ETSU’s Marija Popovic have been named Southern Conference volleyball offensive and defensive players of the week, respectively, for matches played Oct. 23-29, the conference office announced Monday. This is the second weekly award this season for both Anderton and Popovic.

Anderton, a setter, earns her second weekly honor this season after dishing out 106 assists in just nine sets over the weekend. Anderton started the weekend with 49 assists and chipped in eight digs in a five-set loss to UNCG. The junior then handed out a season-high 57 assists in a 3-1 win over Western Carolina, adding 10 digs to record a double-double in the contest. The Collierville, Tennessee, native averaged 11.78 assists per set and 2.00 digs per set as Samford improved to 6-6 in SoCon play. Anderton ranks sixth in the conference with an average of 9.00 assists per set and holds the top two positions in the conference for most assists in a four-set match, with both coming against Western Carolina.

Popovic, a libero, picks up her second consecutive weekly award following a 48-dig performance to help the Bucs go 2-0 over the weekend, including a 3-0 sweep of Furman to hand the Paladins their first league loss of the season. Popovic started the weekend with 20 digs and two assists against The Citadel as ETSU picked up a 3-1 win. The freshman then tallied 28 digs and four assists in the win over Furman, snapping the Paladins’ 10-game win streak. The Belgrade, Serbia, native finished the weekend with an average of 6.86 assists per set. Popovic currently ranks second in the conference with 4.69 digs per set.