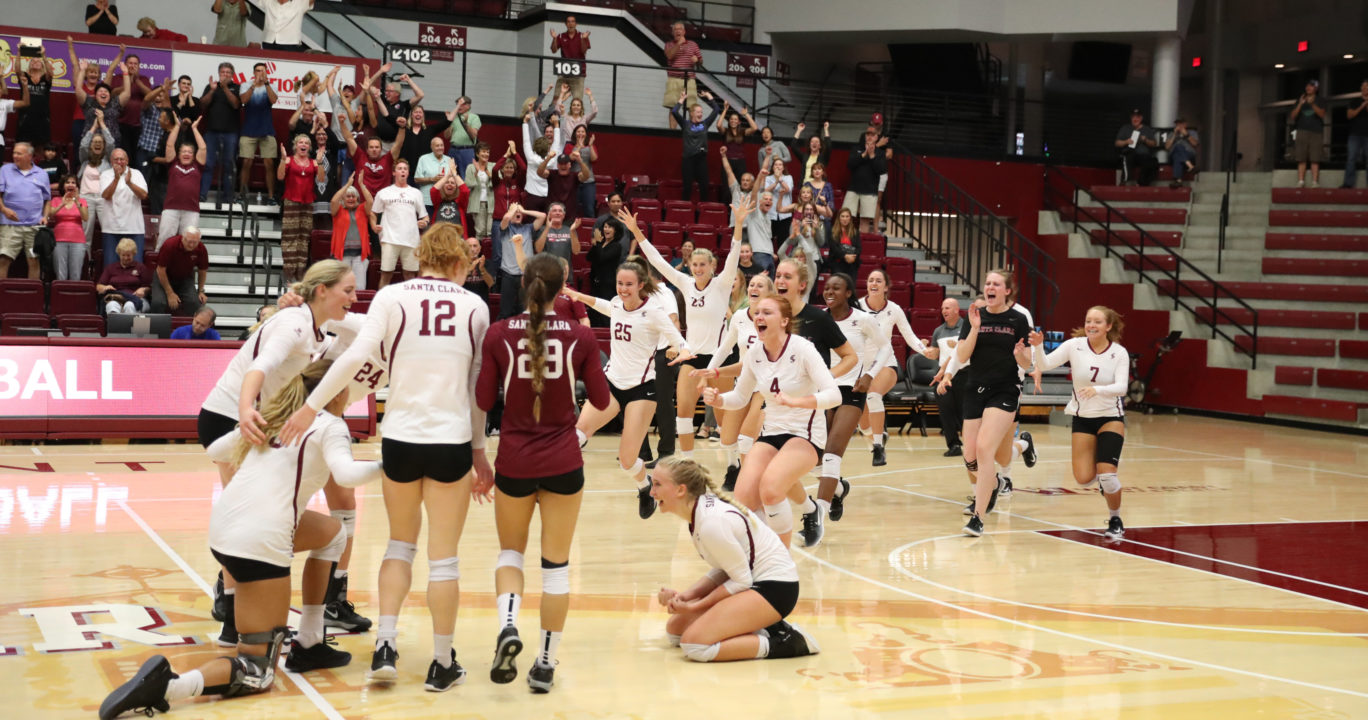 Santa Clara, California – The Broncos put together a stifling defensive effort to limit the high-powered Kansas offense and stun the Jayhawks for a five-set victory over a top-10 opponent.

Over the span of the five sets, Santa Clara totaled 90 digs and 12 blocks, both more than Kansas’ 78 and 10 respectively. Add in that the Broncos were on top of their service game (seven aces to the Jayhawks’ three) and Santa Clara was able to limit Kansas, who came into the day as the top team in the country in kills per set, to hitting .189.

Kansas had a slight lead in set one at 22-21 and pulled further away as setter Ainise Havili, who would log 50 assists, 16 digs and nine kills (while hitting .533), scored kills on a dump and joust. Sophomore Jada Burse (six kills for the match) put away the set as Kansas looked in charge early.

After a back-and-forth set two, Santa Clara pulled ahead for set point at 24-20. One of Taylor Alexander‘s 10 kills (second on Kansas to go with a match-high eight blocks) was sandwiched between three of Kelsie Payne‘s match-best 22 kills as the Jayhawks hit a 4-0 spurt to tie at 24. Payne wasn’t done, as the two-time All-American who hit .333 in the match tied things at 25. For Santa Clara, Jensen Cunningham matched Payne’s production as she logged 16 kills while hitting .500 with six blocks. One of her most important kills came on the next point before setter Kirsten Mead, who racked up 61 assists and a team-best 25 digs, had one of her two kills to put away the set.

Set three was just as tight as the first two, with neither team pulling away or going on a long run throughout the game. Eventually though, Michelle Gajdka had one of her Santa Clara leading 21 kills to finish up the set 25-23 and garner a 2-1 set edge for the Broncos.

While side outs were plentiful in set three, set four opened with a series of runs. First it was Santa Clara up 3-0, then Kansas led 8-5. After switching to Santa Clara at 10-8, the Jayhawks switched the lead to their favor at 16-11 and would hold that advantage until 21-16. After the Broncos scored five unanswered to tie at 21, Kansas recorded three straight before ending things at 25-23 on an Ashley Smith kill.

In a shortened fifth set, Santa Clara was the team to jump out early with a 5-1 edge. After a Zoe Hill kill for Kansas, libero Allie Nelson stepped to the service line and provided more than just her match-high 27 digs as she helped serve Kansas to a lead at 6-5. Kansas was even up at the switch 8-6, but struggled to break the serve of Tessie Powers (five kills, 15 digs), something that had become a problem for the Jayhawks in earlier sets. A 4-0 run regained the lead to the home side, as they even got ahead 13-10. At 14-12, Chloe Loreen (11 kills, 18 digs), ended the match as Hailey Lindberg (17 kills, three blocks) and Tatiana San Juan (24 digs) also posted notable performances for the Broncos.

Kansas now looks to overcome losing two of its last three with a match against Idaho. Following that, they will have more than a week to get ready for Big 12 play and a road match against Kansas State. Santa Clara on the other hand finishes up this event against San Jose State on the road before getting into WCC play where they’ll look for another ranked victory over BYU.

The Broncos (7-4), who won their fourth straight, had a .231 attack percentage helped by Kirsten Mead who posted 61 assists, the second-highest total of her career, and a career-best 25 digs.

The Broncos opened the tournament by sweeping Idaho on Friday afternoon.

Kansas will face Idaho at 11 a.m. Saturday in Leavey Center. The Broncos play at San Jose State at 7 p.m. Saturday in the final game of the two-day, four-team tournament.

Jensen Cunningham tallied a match-best 12 kills and Michelle Gajdkaadded 10 and nine digs to lead Santa Clara volleyball to a 25-23, 25-16, 25-19 sweep of Idaho on Friday afternoon in the opening contest of the tournament.

Kirsten Mead set up many of those kills with a match-high 39 assists to go along with eight digs for the Broncos (6-4) who recorded a season-best .282 hitting percentage in the outing, including .432 in the second set when they lead just 9-8 before scoring nine of the next 11 points.

“All in all it was a great team effort, it’s nice to get the first home game out of the way,” Santa Clara head coach Jon Wallace said. “I’m really proud of how our girls got started in game one, gave up the lead but then came back and won that, so that was good for us to go through that experience.”

The first and third sets were more closely contested.

Idaho scored six straight points to tie the first set at 23-all, but Taylor Odom and Allison Kantor answered with back-to-back kills to close it out.

Sarah Sharp and Kaela Straw each had nine kills for the Vandals (4-5) who were unable to get their offense on track until the third set they posted a match-best .261 hitting percentage.

Idaho twice tied the third set (the final time at 18-all) before the Broncos were able to take control. Mead and Tatiana San Juan set up Hailey Lindberg for a pair of kills to give the Broncos a 20-18 advantage.

Brittany Gillingham then came off the bench and had an ace to start a 6-0 run. Lindberg added another kill around a pair of Idaho errors in the flurry before Gajdka finished off the match with her final kill.

Cunningham registered an impressive .611 hitting percentage, including five kills in six attempts in the final set.

The Broncos, who posted a .231 attack percentage, defeated the highest-ranked opponent on their home floor in the history of the program. Santa Clara defeated No. 10 BYU, 3-1, on Sept. 26, 2015. 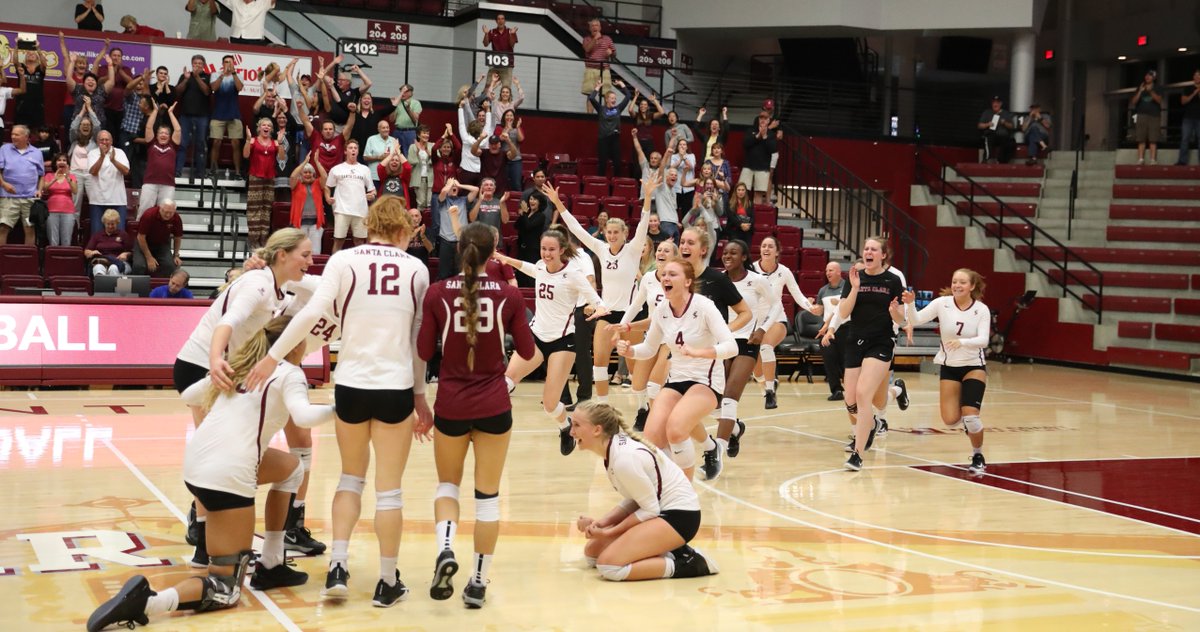 HIGHLIGHTS | Two big plays by the #SCUBroncos in Friday’s deciding set to defeat No. 9 @KUVolleyball! #StampedeTogether

The first three sets were tied 38 times with 16 lead changes and the final frame played out the same way.

Kansas erased an early 5-1 deficit in the fifth set to claim an 8-6 edge before the Broncos stormed back.

Back-to-back kills from Gajdka pushed the Broncos into a 9-8 lead before Mead set up Cunningham twice down the stretch, the last one increasing the edge to 13-10.

But the Jayhawks took advantage of a pair of attack errors to pull within one.

After a Santa Clara timeout, Kansas was forced into an attack error and freshman Chloe Loreen, who equaled a career best with 18 digs, finished off the match with her 11th kill of the evening.

Ahead two sets to one, the Broncos led midway through the fourth, but the Jayhawks pulled ahead 21-16.

Santa Clara scored five straight times to tie the set, but Kansas got kills from Taylor Alexander and Ashley Smith to pull away for a 25-23 win.

Fewer errors and a combined 10 kills from the Gajdka, Cunningham and Lindberg trio helped the Broncos prevail, 27-25 in the second set.

Ainise Havili had a double-double for Kansas with 50 assists and 16 digs. 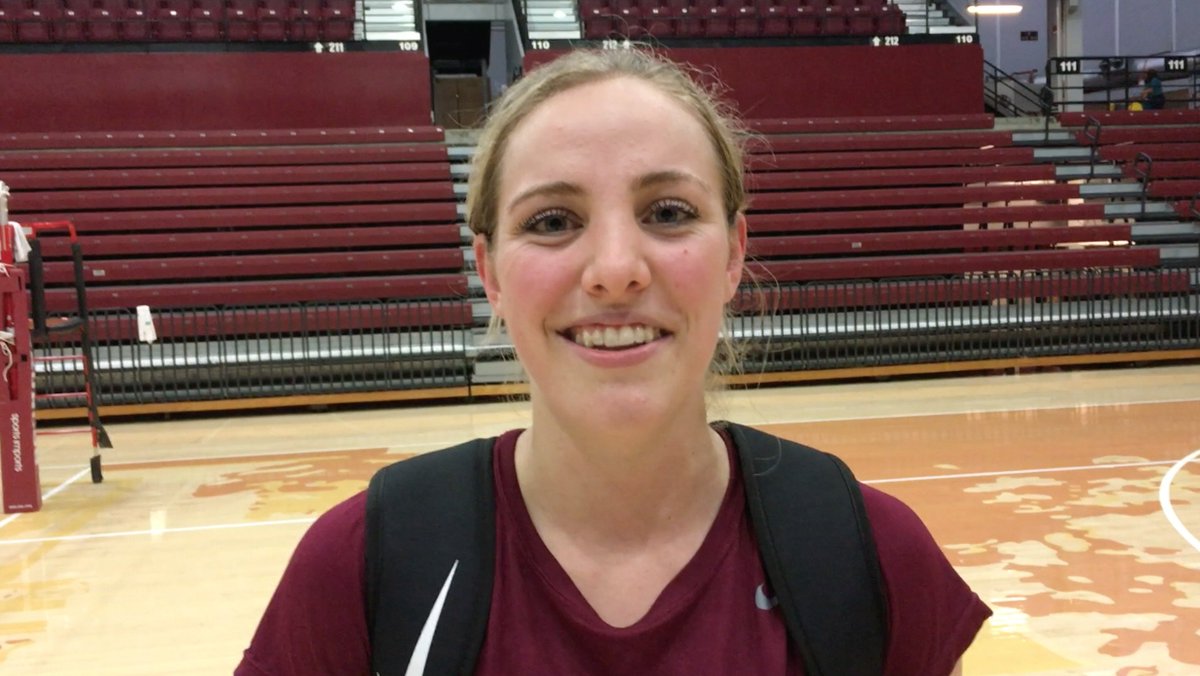 from #SCUBroncossenior Kirsten Mead! Here are her thoughts on the W over No. 9 Kansas. #StampedeTogether

NOTES
• In Friday’s opener, the Broncos posted their third-straight sweep and fourth in the previous five matches.
• In the Idaho match, Gajdka (10) hit double figures in kills for the sixth time this season. Her 21 kills against Kansas was a career high (19 vs. American, Aug. 25).
• San Juan had a match-high 18 digs against Idaho, which was tied for her third-highest total of the season. She had 25 at American (Aug. 25) and 24 in the nightcap vs. Kansas.

“It’s been a while since we’ve seen the red team here at home. We’ll take every win we can get whether or not it is awesome to play great teams. I’ll tell you the student body and the student-athletes came out tonight. Our athletic director has done a great job making this place alive again and it’s a great place to be apart of.”

“I thought that the coaches did a good job dialing up some plays that the girls felt comfortable with so we could execute what we do every day. They felt confident in that moment so, even though we gave up the lead in the second set. All in all that’s what we can do and expect of them and then they executed what we wanted, so good job to all the girls for hanging in there.

NEXT UP
The Broncos play at San Jose State at 7 p.m. Saturday in the finale of the two-day tournament.

“We got into a lot of 20-all scores at the end of sets, and it came down to them playing cleaner than us,” Kansas head coach Ray Bechard said. “We just weren’t as organized as we needed to be. Santa Clara deserves this match. They are a good team that played hard tonight and had better offensive balance than we had. I’m disappointed that we couldn’t be a little better in the end of sets that we lost.”

Kansas (10-2) drops its first match against an unranked opponent since Dec. 4, 2014 against Little Rock in the NCAA Tournament.

Santa Clara (7-4) held Kansas to a .189 hitting percentage, as the ninth-ranked Jayhawks become the highest-ranked team to lose to the Broncos on their home court. Setter Kirsten Mead dished 61 assists with 25 digs and Michelle Gajdka recorded a team-high 21 kills.

UP NEXT
The Jayhawks conclude the Santa Clara / San Jose State Tournament and regular-season nonconference play on Saturday with a 1 p.m. Central time first serve against Idaho.