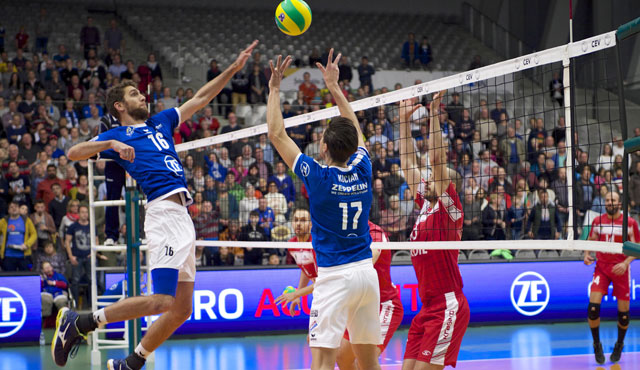 Scott Kerovken will be playing for Tours VB, the most successful club in France after playing for VfB Friedrichshafen. He is the third middle blocker from UC Irvine to play for Tours this decade.  Current Photo via Günter Kram

After spending his first four seasons in the German Bundesliga, Scott Kevorken will be on his way to France to play for Tours VB.  This is the 3rd middle blocker from UC Irvine to play for Tours this decade with Dave Smith competing for them from 2011 to 2016.  During that time he helped them win the French Ligue A championship on four occasions.  Dan McDonnel was also a part of the team which won the title in 2015.  This past season they claimed the French Ligue A crown back from Chaumont 52 after a 2-year drought.  In addition to this year’s championship, Tours VB have won the following titles:

Kevorkian is coming off what could be considered a disappointing season.  He played his first 3 seasons at SVG Luneurg.  He was instrumental in helping this newly-promoted club reach historic 4th place finishes twice in the Bundesliga.  They also made an appearance in the finals of the German Cup in 2015.  Kevorken was signed by VfB Friedrichshafen for the 2017-2018 season.  His team won the German Cup, finished on top of the regular season league table, and reached the Playoffs 6 round of the CEV Champions League.  Though after the navigating the regular season with a perfect 20-0 record, they dropped the final series with Berlin 3 matches to 2.  During that time Kevorken was used primarily as a substitute off the bench as the season progressed into the spring.  He will be joining Barthelemy Chinyeze from Asseco Resovia and Dmytro Teryomenko from Cerrad Czarni Radom as the new additions to the roster at middle blocker.