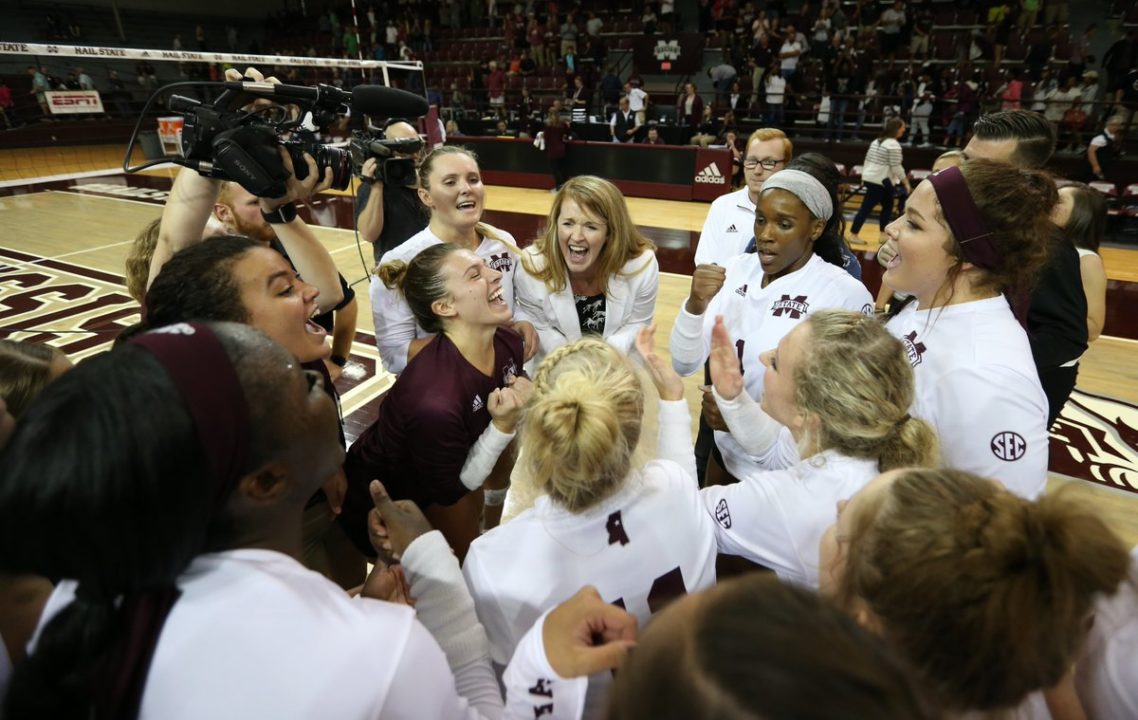 While 10th-ranked Florida earned a sweep at LSU, Mississippi State earned the first SEC victory of the Julie Darty era with a 5-set comeback win over Auburn.

After falling behind to Auburn 2-0, Mississippi State came all the way back to claim the victory in 5 sets in Starkville, Miss. The Bulldogs, who ended a 5-match skid with their 2nd win in the last 11 meetings, helped first-year head coach Julie Darty earn her first SEC victory at Mississippi State.

Auburn continued to possess the momentum in the second set, jumping ahead 6-1. The Tigers never let up en route to their 25-12 victory.

The third set was a battle, as it contained 12 tie scores. With the set knotted 20-all, Mississippi State stayed alive in the match with a 5-2 closing stretch to earn the 25-22 win.

A series of 7 ties in the finale was broken by the Bulldogs, who scored 3 of the final 4 points to earn the win 15-13.

10th-ranked Florida secured its 3rd SEC conference victory with a sweep on the road at LSU Wednesday night. The Gators used a .323 attack percentage and a 10 to 4 blocking edge to claim the win.

Road wins in the #SEC are pretty sweet! 💪🐊🏐 Highlights from a sweep on the road at LSU! 😬👀👌 pic.twitter.com/w9WrTvdLLX

In the first set, LSU used a 6-point push to take an 8-4 advantage early. The Tigers went on to lead by as many as 5 before the Gators came rallying back into contention at 14-all. Seven additional tie scores followed, then Florida broke through with a 4-2 closing stretch to earn the 25-23 win.

A string of 5 ties occurred in the second set before the Gators used a 6-2 rally to earn a 25-21 victory.

In the third set, Florida jumped ahead 17-11 with an 8-2 run. LSU did not give up though as the Tigers rallied back to tie the score late, 19-19. The Gators responded with a 6-point push to close it out 25-19 and earn their 3rd consecutive sweep.

Third sweep in as many games! #GoGators pic.twitter.com/Q4YylxQ4Qu