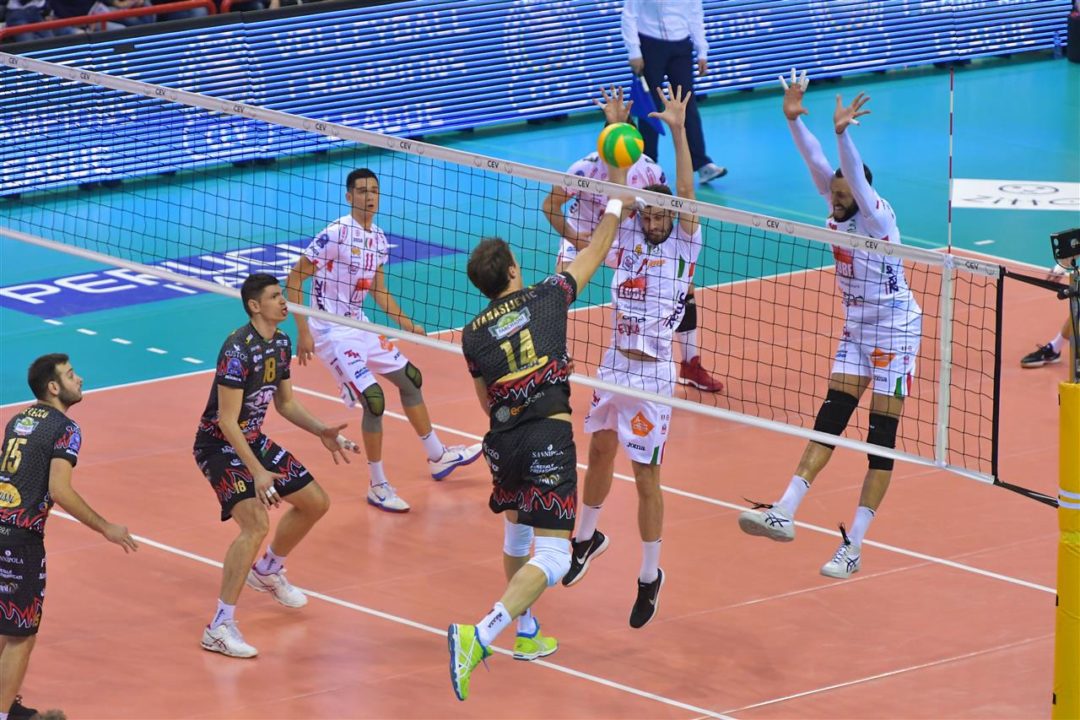 It is perhaps one of the biggest matches that will take place in the 2018 Men's Champions League up until the ending rounds, as Sir Safety Conad Perugia battles back from a 0-2 deficit to defeat Cucine Lube Civitanova in five sets. Current Photo via CEV

It is perhaps one of the biggest matches that will take place in the 2018 Men’s Champions League up until the ending rounds, as Sir Safety Conad Perugia battles back from a 0-2 deficit to defeat Cucine Lube Civitanova in five sets.

The win comes in the first leg of the fourth round of the Champions League and is rematch battle from the 2017 edition of the event as the two teams met in the semifinals last season that saw Sir Safety take the win. They went on to the finals to fall to the reigning champions Zenit Kazan in straight sets in the finals.

Sir Safety made a huge comeback against Cucine Lube in the fourth round of the Champions League. The first set was a true battle between the two teams as the score went past the normal ending of 25 with Cucine Lube taking the 1-0 match lead 30-28. They quickly rolled out to a second set win of 25-20 to go up 2-0 in the match.

The third set could have been the end of the match as it was a close battle up until the end. Sir Safety took the third set win 25-23 then by a larger gap in the fourth of 25-19. This forced a fifth and deciding set in the match with Sir Safety pulling through with a 15-9 final set win to take the victory.

For Cucine Lube, Osmany Juantorena put down 24 points with Tsvetan Sokolov and Taylor Sander producing another 17 and 14 points, respectively in the loss.

Match of the Week was an easy pick this time round, and it went to Sir Colussi Sicoma PERUGIA (@SIRVolleyPG) who fought back from 0-2 down against @VolleyLube, and as you will hear from @AAtanasijevic, they will keep fighting in Pool A…! pic.twitter.com/N00DYY9PFk