Stanford Beach Kicks Off 2017 Season With Dual Matches At Home 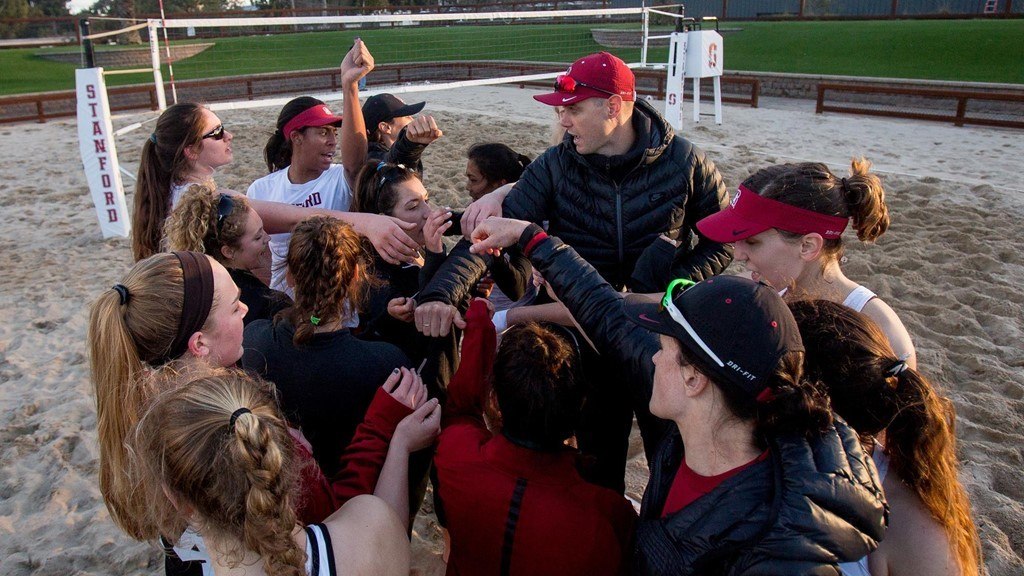 Led by first-year head coach Andrew Fuller, the Cardinal enters the campaign as the 13th-rated team in the nation, according to the American Volleyball Coaches Association’s preseason poll.

“Coaching this group has been an absolute dream – they’re enthusiastic, gritty and hungry to improve,” said Fuller, who leads one of the youngest rosters in the nation. “It’s important for us to paint broad strokes and let them fill in the details with their own style of play and communication. We’re all about ownership and empowerment, and the more they’re steering the ship, the more they’ll be able to perform when it counts.”

Stanford’s entire home schedule will be played at the Stanford Sand Volleyball Stadium. Opening in 2015, the stadium has four 75-foot long courts, grass berms for seating and is outlined with 10 palm trees to give it a ‘beach’ feeling, making it the premier collegiate beach venue in the nation.

Last season, all four of Stanford’s class-eligible student-athletes received academic recognition from the Pac-12 Conference and the AVCA. Karina Robinson, Raquel, Lutz and Vanjak were all honored, while Stanford was one of six NCAA teams to be recognized with the AVCA Team Academic Award. It was the second consecutive season Stanford earned the recognition – teams must carry a 3.30 cumulative grade-point average to be eligible.

Next for the Cardinal

“We love being in the Pac-12, knowing that we’ll get maximum growth from maximum difficulty,” said Fuller. “We look forward to leaning into the challenge of every conference match.”

Stanford’s matches against Cal on April 11 and USC on April 18 will broadcast live on Pac-12 Networks. The Pac-12 Championships begin April 27 in Tuscon, Arizona, before the NCAA Championships in Gulf Shores, Alabama (May 5-7).

Throughout the season, Payton Chang will write a weekly blog to provide readers with a behind-the-scenes look at the Stanford Beach Volleyball program. Chang, a sophomore who also competes on Stanford’s national championship-winning indoor team, played every match for the Cardinal last season, finishing with a 6-12 record.

A 2006 graduate of Virginia Tech, Fuller has experience as an evaluator for the USA Volleyball High Performance Program and is an instructor and cadre member of the USA Beach Volleyball Coaching Accreditation Program. Prior to joining Stanford, Fuller coached his wife, Lauren Fendrick, to a berth at the 2016 Rio Olympic Games and a win at the 2016 AVP Championship. From 2012-15, Fuller served as an assistant coach with USC, but coming to Stanford has been a completely new experience for the native of nearby Mountain View.

“The biggest part I enjoy about Stanford is the liveliness of the campus environment, both inside and outside of athletics,” said Fuller. “The college setting gives exposure to a tremendous range of thoughts, ideas and personalities. I have already learned so much from the amazing coaches we have at Stanford – the relationships with coaches and people outside of your own sport keeps us pushing forward in our own areas of expertise.”

Assistant coach Karissa Cook returns for her second season with the program. Cook, a 2013 graduate of Stanford with a degree in engineering, was a four-year member of Stanford’s indoor volleyball team. She was a three-time Pac-12 All-Academic selection, and earned all-conference recognition in 2011 as a junior. After graduating from Stanford, Cook earned her master’s degree in civil and environmental engineering from Hawaii while competing for the school’s beach volleyball team. An AVCA Beach All-American in 2014, Cook finished second in the national pairs championship while helping Hawaii finish third in the team competition.

Joining the Cardinal coaching staff for the 2017 season is volunteer assistant Lauren Fendrick. A native of San Diego, Fendrick competed in softball and volleyball at UCLA, graduating in 2003 with a degree in communication studies. Fendrick played professional indoor volleyball in Puerto Rico and Turkey before joining the AVP Tour in 2003. Most recently, Fendrick won the 2016 AVP Championship in Chicago with partner Brook Sweat, with whom she competed at the 2016 Rio Olympic Games. Fendrick also owns a degree in law from USC, and has passed the bar exam. Fendrick is married to head coach Andrew Fuller.