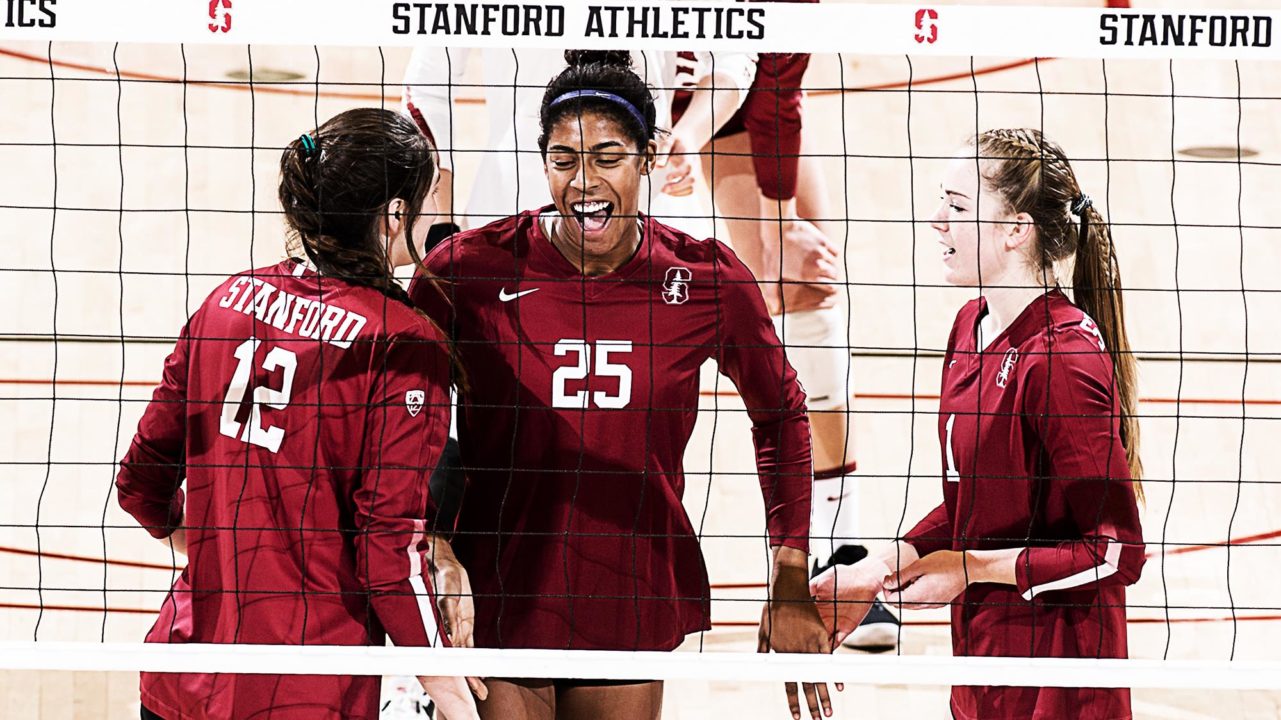 Following their first loss of the season to BYU in five sets, Stanford was able to sweep Wichita State then face a West Virginia team to round out the weekend. With some questions of what talented players could do with bigger roles while facing a team with a losing record, the Cardinal mixed up the lineup a bit on Saturday evening.

In what would go on to be a dominant 3-0 (25-9, 25-9, 25-12) victory over the Mountaineers, Stanford gave 6’4″ senior middle blocker Courtney Bowen her first start while Mackenzie Fidelak appeared for the first time.

In Bowen’s case, Kevin Hambly said in the preseason that “Holly Campbell and Courtney Bowen are going to battle it out for the other middle position. Courtney’s a senior from New York City – she was a little behind when she came as a walk-on – and has really developed into a nice middle blocker; super physical and touches 10’10”.”

She had appeared in five sets over the first four matches of the season, totaling 6 kills (.125) and 5 blocks. However, in the previous match with Wichita State, she had 4 kills (.571) and 3 blocks, earning her the start versus West Virginia. The other middle battling with her, Campbell, had 6 kills (.308) and 2 blocks against Wichita State after hitting just .111 versus BYU, so it seems like Hambly is testing out what gives his team the best option in the middle.

In the West Virginia match specifically, Bowen wound up with 6 kills – second on the team – on a .545 hitting percentage to go with 6 blocks. Campbell came off the bench and notched 4 kills on a .200 clip and 4 blocks. Both played in all three sets.

Fidelak meanwhile came on not as a starter, but for the first time in her career. The 6’1″ freshman outside hitter/opposite who was ranked the 18th best recruit by PrepVolleyball went on to appear in two of the team’s three sets against the Mountaineers. In her time on the court, she recorded 3 kills on 9 swings with 1 error – good for a .222 hitting percentage.

It wasn’t just those two either. Players like redshirt sophomore Michaela Keefe appeared in two sets – had three sets played previously – and impressed with five kills on a .455 mark along with an ace.

All of the infusions are a reminder that it’s still early in the season and teams are still trying to figure out what works best in their lineups. It also shows that one player could emerge at any time now and become a mainstay as a school drastically improves to the end of the season. What’s good for Stanford in that regard is that Hambly has all kinds of puzzle pieces, it’s just about finding the right ones that fit together as the Cardinal contend for a National Championship.