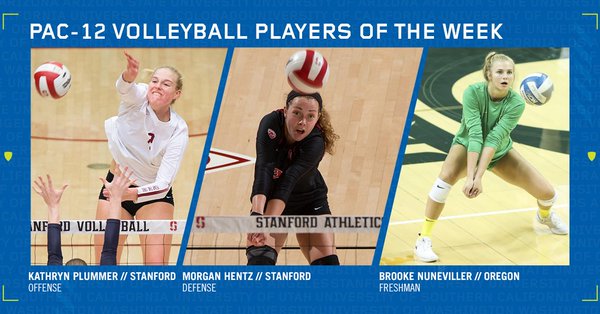 Stanford's Kathryn Plummer and Morgan Hentz and Oregon's Brooke Nuneviller were honored for their Week 3 efforts at the Big Ten/Pac-12 Challenge.  Current Photo via Pac-12 Conference

Kathryn Plummer, JR, STAN (Aliso Viejo, Calif.)
5.71 KPS, .415 Pct., 6.6 PPS
• Led Stanford offensively to a sweep over No. 5 Penn State and a four-set win against No. 1 Minnesota, averaging 5.71 kills and 6.60 points per set for the weekend.
• Posted a match-high 15 kills on .382 hitting, and a match-best 17 points in the sweep over the Nittany Lions.
• Followed up against with a season-high 25 kills on .438 hitting to go with 10 digs for her first double-double of the year against the top-ranked Golden Gophers.
• It marks Plummer’s seventh-career weekly honor and 127th all-time for the Cardinal.

Morgan Hentz, JR, STAN (Lakeside Park, Ky.)
38 Digs, 5.43 DPS, 3 AST
• Anchored the Stanford defense in a 3-0 sweep of No. 5 Penn State and a 3-1 victory over No. 1 Minnesota, averaging 5.43 digs per set for the weekend.
• Totaled 16 digs in the sweep over the Nittany Lions and had a season-high 22 digs against the top-ranked Golden Gophers.
• Recorded double-digit digs in all seven matches this season.
• It marks Hentz’s second-career weekly honor and the 128th all-time for the Cardinal.

Brooke Nuneviller, FR, ORE (Chandler, Ariz.)
6.29 DPS, 2 Aces, 4 AST
• Led the Ducks on defense to a four-set upset win over No. 1 Minnesota and a tough 3-0 loss to No. 5 Penn State, combining for 44 total digs in just seven sets against a pair of top-five opponents.
• Led all Ducks with a season-high 28 digs in the big win over the Golden Gophers.
• Led her team again with 16 digs against No. 5 Penn State.
• It marks Nuneviller’s first-career weekly freshman honor and the 36th all-time for the Ducks.

Big congrats to @brookeyy_5, your Pac-12 freshman of the week! Nuneviller racked up 44 total digs vs. a pair of top-five teams over the weekend #GoDucks