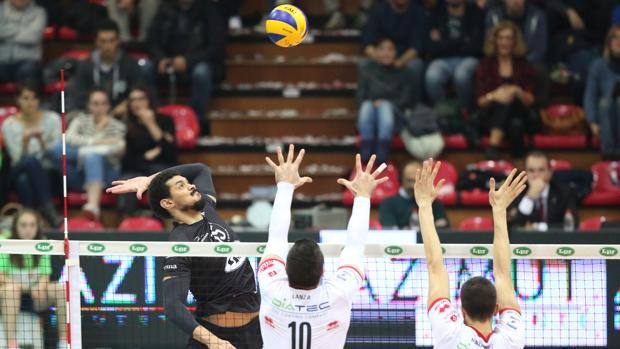 Fernando Hernandez is coming back to Italy after a year in Turkey with Halkbank Ankara. He became the top scorer in Italy during his previous 2 seasons in the SuperLega. Archive Photo via Piacenza

Emmas Villa Siena has wasted little time this off-season. After winning the Serie A2 and earning promotion to the Italian SuperLega, Siena signed an opposite who has proven to be one of the premier scorers in Italian volleyball. Fernando Hernandez is making his way back to Italy after winning a Turkish championship with Halkbank Ankara.  The opposite from Cuba started his professional career in Italy in 2015 after defecting. At that point in time he played with Expiriva Molfetta. Hernandez made the move to LPR Piacenza for the 2016-2017 season.

While playing in Italy from 2015-2017, Fernando Hernandez established himself as the best scorer in the league. Over 2 seasons he was the only player to score more than 1000 points. His 1004 points and 5.61 was the most over that 2-year span.  While playing for Molfetta, he was the 2nd on the list of top scorers to Aleksandar Atanasijevic averaging 5.19 points per set. His team qualified for the playoffs as the 6th seed but lost in the quarterfinals. Fernandez scored 563 points the next season in Piacenza, just 1 point behind Giulio Sabbi. He was also 2nd in the Italian SuperLega with a 5.41 points per set average. Piacenza qualified for the playoffs as a 7th seed, but were eliminated by Sir Safety Conad Perugia in the quarterfinal round.