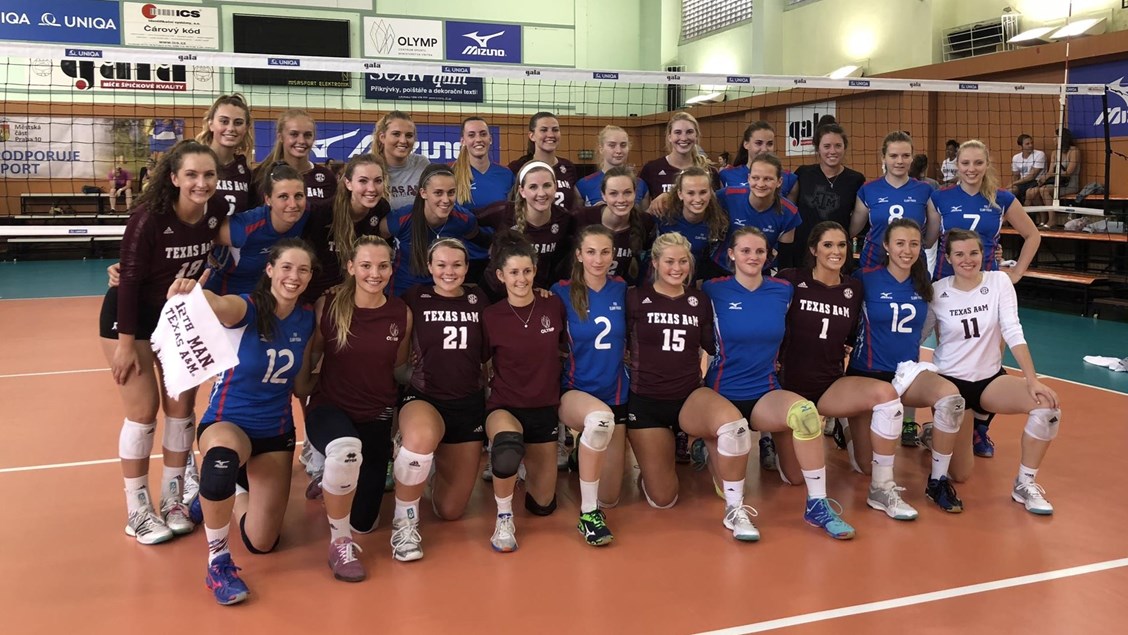 The Aggies got out to a fast start and quickly gained the momentum at the beginning of the opening set by scoring the first six points of the contest. A&M, which held the lead from start to finish, equaled its largest lead at 12-3. Olymp Praha later got within 22-17 before the Aggies used a 3-0 run to close out the frame.

A kill by outside hitter Maddie Douglas put A&M ahead, 13-8, in the second set, but Olymp Praha rallied and took its first lead at 16-15. A&M regained the lead, 17-16, on an ace but the home team stayed close and eventually regained the lead, using a 3-0 run to pull ahead, 23-21. A&M tied the score at 23-23 on a kill by Douglas, but a service error put Olymp Praha at set point. Outside hitter Hollann Hans extended the set with a kill from the back row, and Douglas’ next attack landed on the back line for a kill to put the Aggies up, 25-24. Another A&M service error evened the score, 25-25, but opposite hitter Samantha Sanders got a kill on the ensuing play, and Hans teamed with middle blocker Mallory Talbert for a block to clinch the 27-25 win.

Setter Camille Conner had two kills and also set up middle blocker London Austin-Roark for a kill on the slide attack during a 3-0 A&M run that gave the Aggies a 9-7 lead in the third set. An ace by Sanders would later give the Aggies a 12-9 advantage, but Olymp Praha rallied, scoring seven unanswered points to go up 17-12. The home team continued to pull away and closed out the match with a 25-17 win in the final set.

The Aggies head to Maribor, Slovenia, in the morning, stopping in Vienna, Austria along the way for a few hours of sightseeing in The City of Music. Following the day of travel, A&M will return to the court tomorrow evening to take on the Austrian National Team in Maribor.

Fans will be able to keep up to date on the Texas A&M volleyball team’s travels on 12thMan.com and Facebook as well as on Twitter and Instagram by following @AggieVolleyball.

On her general thoughts on the match…

“I think we were a little bit better today. It was good. We executed the things we were wanting to focus on. Our competition is going to get better and better, so I think the team responded well. We played pretty clean the first two sets, and then we changed some things up so we challenged them as individuals. We need to be a little sharper on that side of the ball—ball control when it comes to passing and defense. So the first two sets we were very good. I was very pleased with them.

“As far as the overall execution, we are telling our pin hitters and middles to do specific things to execute a game plan, whether it is stopping something or doing something offensively, as well as our defense just keeping us in system. It seems pretty basic, but it is something that we need to focus on. We talked about it when met as a team today. We want them to really reel in their focus as individuals and altogether as a team.”

May 16: match vs. Slovenia National Team