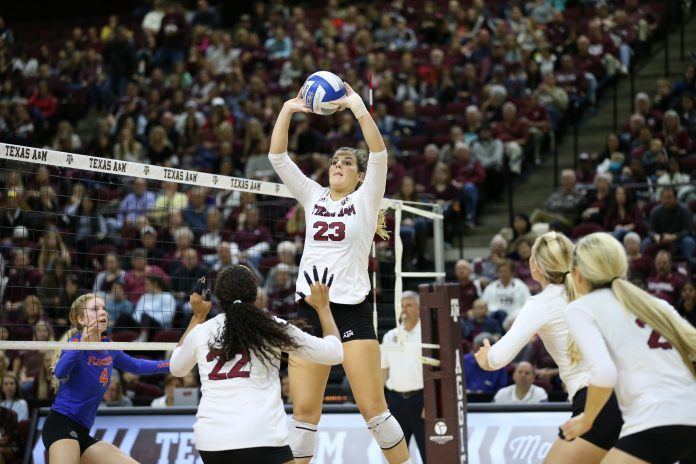 Stephanie Aiple, one of the most decorated players in Texas A&M history, is currently in the process of applying for... Current Photo via Texas A&M Athletics

Stephanie Aiple, one of the most decorated players in Texas A&M history, is currently in the process of applying for a medical exemption from the SEC and will forego her senior season due to chronic back pain. Aiple has endured her back pain since high school.

“Ever since I started having pain, doctors told me my back pain will always be with me,” said Aiple. “They said, ‘We’ll do whatever we can, but basically you are going to have to deal with this for the rest of your life,’ so that’s scary. I even debated with my parents on whether or not to play in college.”

Aiple was the 2015 SEC Player of the Year, leading the Aggies to the SEC championship as a sophomore. She is the first player in Texas A&M history to receive AVCA All-America distinction three times, named as an AVCA Honorable Mention three consecutive years. Aiple will end her career ranked fifth in Aggie career records with 3,413 assists.

I love playing volleyball, and I am so glad I decided to play for Texas A&M,” said Aiple, who is currently recovering from a non-volleyball related hip injury suffered last summer, which intensified throughout last season. “It was all worth it for me because I was so happy and loved what I was doing, but I was in so much pain and I just can’t put myself through another year of hurting so much. It was a really tough decision because volleyball has been a part of my family for so many years, but after long conversations we decided as a family that it was best for me and my body to not play anymore.”

In the past season, Aiple led the Aggies to a 21-9 record, bringing the team to their sixth consecutive appearance in the NCAA Championship tournament.

Aiple dished out an average of 10.85 assists per set, directing the Aggie offense that ranked 11th in the nation and second in the SEC with 14.39 kills per set. She played in all matches of the 2016 season, aside from two sets, leading A&M to a .259 hitting percentage, the eighth highest team season hitting percentage in program history.

At the end of the 2016 campaign, head coach Laurie Corbelli presented both Aiple and middle blocker Jazzmin Babers with the team’s Most Valuable Player award. It was the second consecutive season that Aiple earned both team MVP and All-SEC Team honors.

Aiple entered her college playing career, becoming the most decorated freshmen in Aggie history. She was named as an AVCA Honorable Mention All-America and the second Aggie to be named AVCA Region Freshman of the Year. Also, being the only Aggie to be named ESPNW national player of the week, leading A&M to victories over #6 USC and #13 San Diego. Aiple was named a three-time SEC Freshman Player of the Week.

“On behalf of Texas A&M volleyball, we want to thamk Stephanie for the three years in which she shared her amazing talent with us,” Corbelli said. “We wish her well in all her future endeavors and hope that everything she dreams for comes true.”

Aiple is majoring in recreations, park and tourism sciences, aspiring to be an events coordinator following her expected May 2018 graduation.